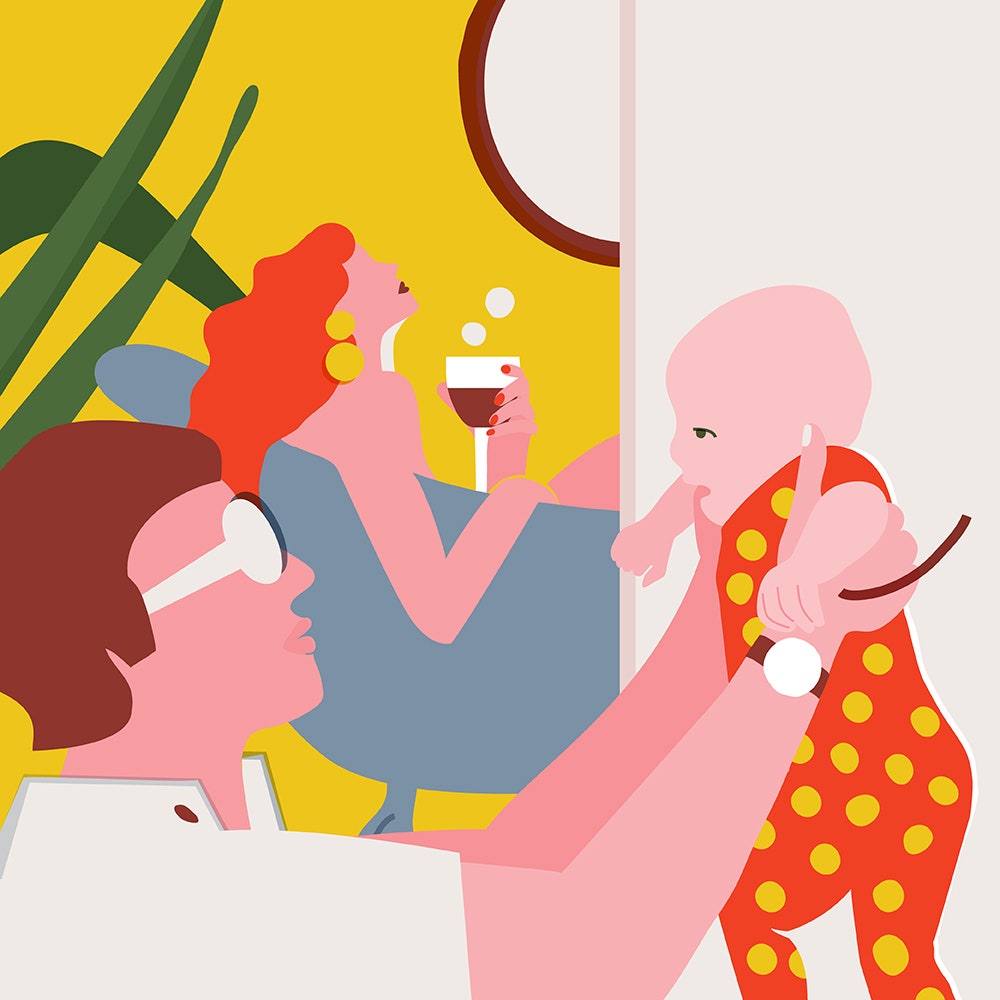 When you have a kid, all sorts of buried beliefs that you didn’t even realize you had suddenly bob to the surface. It’s especially jarring if you consider yourself a more freewheeling type, because often they have a more traditional slant: after years of complete uninterest, suddenly religion, or seeing more of your relatives, or having regular family dinners, becomes more important to you.

For me, motherhood brought up all these dusty, retro beliefs about gender that were lurking in my psyche — the most prevalent being that men, much more than women, need “alone time.”

It started the week that I had our daughter — when, in an amazing coincidence of timing, my husband Tom decided to take up long-distance cycling. On weekends, he would disappear for six-hour rides — that is, when he wasn’t training for a marathon, another new hobby. When he became a dad, his social life didn’t really change. He traveled the country for group bike trips. At night, he met friends at bars and restaurants while I stayed home. In the morning, he’d go for a run while I got up with the baby.

Before we had become parents, our relationship was fairly egalitarian and drama-free. But after the baby came, I was seething with resentment pretty much all the time. I couldn’t even look at his Instagram posts of bike trips to the Guatemalan jungle or the Italian Alps (“5000 feet of climbing to go. #dolomites”). So why didn’t I open my mouth? Because I really did believe that it was vital for him to have time to himself. This widespread idea has fueled an entire industry of Man Cave construction (5)).

Part of this belief sprang from my own upbringing, which was traditional: My mom stayed at home while my dad worked as a manager at J.C. Penney. At nights and on weekends, my father would regularly head to his toolshed or the garage, bringing his transistor radio and a cooler of beer. My two sisters and I were told not to “bother him” because his alone time was sacred. He’s now 75 and still needs to escape the rest of us: During the last family gathering we had at my parents’ house in New Jersey, I went to their basement to change a load of laundry (yes, at age 51, I still wash my clothes there, rather than in the dank laundry room in my building). When I snapped on the basement light, there was my father, standing in the dark. It was sort of creepy.

“What? Oh, sure,” he said cheerfully. He was just grabbing a moment away from his sugared-up grandchildren. Actually, it was more than a moment. He might have been down there for an hour, just standing there. Maybe he’d reorganized a little? I don’t know.

Meanwhile, I don’t remember my mother ever tinkering in some room by herself.

Throughout my life, I had heard that men needed alone time from tons of other women. I wondered: Why do we tell ourselves that? Could there be some sort of evolutionary reason why men feel the need to escape — to scan the horizon for predators or something?

So I did some research — and, surprise, found out that this notion wasn’t true. Among other experts I talked to, Joseph Henrich, a professor of human evolutionary biology at Harvard University, was stumped. “I cannot think of any evolutionary approaches that might illuminate this,” he told me.

Yet not only did I co-sign this behavior but I made the situation worse, courtesy of another retro idea that floated up from the ether: that women were fine without alone time. (This despite a 2013 Pew Research survey that found that women have (1) time (1), and a (2) commissioned by the National Institutes of Health that revealed that women are almost twice as stressed as men.)

> Motherhood brought up all these dusty, retro beliefs about gender that were lurking in my psyche.

For the first few years of my child’s life, I made sure that I was a few feet away from her at all times. Slowly, I stopped seeing friends, rarely exercised, never took a trip for a weekend or even a night. What if she needed something? So I was around. Burned out and pissed off, but around. When I got snappish, Tom did notice, and he would encourage me to take a walk or go to a movie alone (once my favorite things to do). But in most cases, I declined.

Because a good mother is a selfless mother, right? I took two-minute military showers (“I’m coming!” I would yell if anyone called, hastily soaping and rinsing). If I had any pockets of free time, I felt compelled to do something useful, such as pick up dinner supplies or buy kids’ socks — something sociologists call “time contamination,” which is much more likely to afflict women. I realized that I had taken the idea to an extreme when I noticed that if I was eating crackers out of a box, I would eat only the broken ones and save the whole ones for my husband and kid. Which is bonkers.

When I met the author Caitlin Moran not long ago at a book event, she told me as much. “There is this massive underlying belief that a woman will *never* run out of love and care and attention — that they should be able to give until they *die*,” she said, stomping around the room in her Doc Martens. “Without any point where you go, ‘That’s enough.'”

That point came for me one Saturday afternoon when I overheard my daughter (you know, because I was three feet away) telling Tom that “dads do the fun stuff, and moms do the boring stuff.” Because for all of my soaring speeches about how girls can do anything and the future is female, what she *saw* was her mother constantly putting herself last. Doing the boring stuff. As James Baldwin wrote, “Children have never been very good at listening to their elders, but they have never failed to imitate them.”

And my relentless self-sacrifice was souring my relationship with my husband. As my world shrank to the confines of our small Brooklyn apartment, our conversations mostly revolved around logistics. Our sex life was in the toilet. (7) than a lousy sex life). And because I rarely left Tom alone with our kid, I was sending him a constant message that I didn’t trust his capabilities — a behavior that sociologists call ” (8),” where mothers control or limit the father’s involvement. How was he supposed to learn anything if I was hovering over him while he changed a diaper, pointing out that he missed some major fecal matter in the creases?

It should have been obvious to me that the craving for alone time is not a male impulse but a human one. Studies link it to (3) and (9). It’s crucial to enjoy your own company: to go on a meandering walk, to do something in which you’re totally immersed in a creative flow. But it has to be truly solo: As one sociology professor told me, you must fully commit and leave the damn house. You can’t shut the door and scroll through a website, because someone is just going to open the door and ask you where the Sun Chips are.

My mom used to love to paint and sculpt and do yoga and write stories, but that all dribbled away when she had three kids. If you had asked me when I was a teen if my mom had any hobbies or passions, I would have been stumped. *Recycling, maybe? She’s always sorting stuff. Or decluttering?* Back then, I didn’t think about my mom’s inner life too much, but during the same family visit where I found my dad in the basement, I asked her about that time period. She admitted that yes, she had been a little bitter (with the usual mom caveat of Not That I Would Change Having You Girls). “I kept telling myself that I’d pick up on all that stuff again when you went to college,” she said, as I made us some tea in the kitchen. In other words, I told her, you put all of your interests on hold for two decades. “Well, when you put it that way, it’s depressing, isn’t it?” she said. We sipped our tea in silence as we looked around her kitchen, now covered in her artwork. “Huh,” said my mom, after a minute.

I don’t want to repeat this pattern in my own life, so with sustained effort, I’ve stopped sublimating my own needs. I go away for the weekend and leave the kid with my husband. She protested at first, but now she has developed a whole set of rituals and in-jokes with him that would not have happened if I had been lurking in the living room. I see friends for dinner. I do things that connect with my earlier, pre-kid self (the good, creative parts, not the part that went out with a guy whose signature greeting was “What’s crappening?”). I go on long, solitary bike rides, work out my problems, brainstorm with myself, and return happier and more present. I’ve learned to be protective and respectful of my free time, just as Tom is. I take long showers and lock the bathroom door. I see weekend movie matinees. I eat the whole crackers.