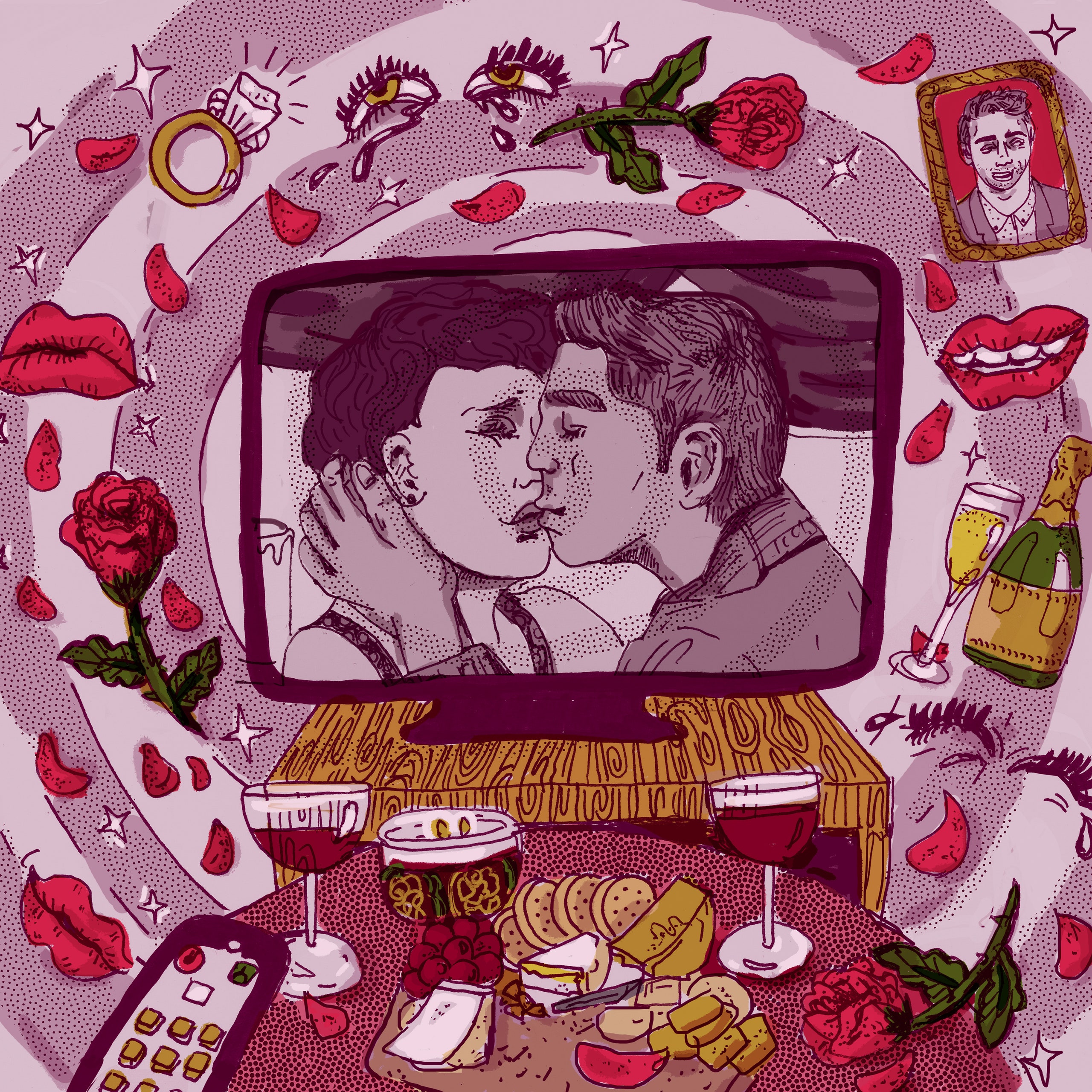 I watch *The Bachelor*, and this is a source of shame for me because my wife, Rosella, shames me for watching it.

Our Manhattan apartment is small, so she is stuck sitting next to me on the couch, either reading a book or occupying herself on her laptop, while I indulge in *The Bachelor* on Monday nights. She looks up at the TV every so often, making remarks like “Oh my God, this is ridiculous”; “I can’t believe you watch this”; “This is garbage”; and “You aren’t going to watch this again next season, are you?”

This dynamic is so ingrained that when this season rolled around, she didn’t even have to say anything aloud to embarrass me. In the first few minutes of a recent episode that finds Arie, this season’s bachelor, and his date, Kendall, stuffing taxidermy rats and then pretending the rodents are on a date at the Eiffel Tower, Rosella just stared at me, shaking her head in disbelief.

My obsession with *The Bachelor* (I am a fan of *The Bachelorette*, too) truly confounds her, and she is desperate to understand the appeal. She regularly asks me, “Why do you watch this?”

I have never given Rosella a thoughtful reply to her question. I deflect the query with my standard joke answer: “If it wasn’t for *The Bachelor*, I wouldn’t know how to love,” which is always met with an eye roll from my wife, who knows there is more to it than that because she knows me better than I know myself.

Seeking answers, I reach out to Amy Kaufman, a staff writer at the Los Angeles Times and author of *Bachelor Nation: Inside the World of America’s Favorite Guilty Pleasure*. It’s a smart book that reveals all the secrets about how the show is produced and explores why so many savvy women who consider themselves feminists are addicted to *The Bachelor*. I confess my addiction to the show, and she isn’t surprised to hear that The Bachelor is a draw for someone totally disinterested in hetero marriage for herself. “I think the show depicts romance in a way that would be appealing to anyone,” Kaufman says. “Who wouldn’t want to go on extravagant dates and be showered with love and affection?”

Like me, and so many other fans, Kaufman has issues with *The Bachelor.* “I don’t like that they tend to depict one type of woman on the show — generally someone who is very thin, tan, white and straight,” she says. “By tuning in, I feel like I’m tacitly reaffirming that this is the only kind of woman who men can find attractive and who deserves love. I really wish the franchise would diversify.”

That said, she is also a total sucker for the love story. “By the end of the season, I’m always rooting for the main couple,” she says, “and I start envisioning what it will be like when I myself am proposed to someday. It just makes me feel warm inside. Gross, I know.”

I’m right there with Kaufman. As cheesy and problematic as this fairy-tale portrayal of relationships can be, I watch *The Bachelor* hoping two people will fall in love and get engaged, though I have never fantasized about anyone proposing to me — I always saw myself doing the asking.

Since we’re both fans, I ask Kaufman how I can defend my obsession with *The Bachelor* to my disapproving wife. “I think maybe the bigger question is: Why does it bother you that she thinks the show is trash? What makes you feel bad about loving it? It seems like you may feel that liking it means you’re somehow flawed,” Kaufman says. “I get that — I’ve obviously come under the same line of questioning while writing an entire book about the show. But I’m trying to let it go. And it’s truly baffling to me that viewers of *The Bachelor* get so much scrutiny when there are plenty of other troubling shows on TV.”

Rosella tells me that I actively watch *The Bachelor* in a way that I don’t view other shows. “You can’t be quiet when you watch it. You literally get excited, and you make a lot of comments,” she says. “You’ll be like, ‘Oh my God! They’re going to Thailand!’ ‘He clearly has no connection with this woman.’ ‘I can’t believe so-and-so got a rose!’ ‘I honestly think it’s going to last this time.’ You also get teary a lot. You get so caught up in what’s happening.”

I am surprised to hear this, and it is this insight from my observant wife, who spends an awful lot of time watching me watch TV, that finally gets me thinking even more seriously about why I am so invested in this show.

If I’m being completely honest with myself, and I am being open and vulnerable now in a way that is surprising me (this is the state of being that every love seeker on *The Bachelor* strives to reach!), I think the main draw of this voyeuristic reality show is that it allows me to vicariously take part in an experience that wasn’t available to me for many years — a carefree romantic relationship, something straight people can take for granted.

I grew up in a small New England town, and I knew I was a lesbian when I was a kid. But I also knew I couldn’t tell anyone until I was an adult and had moved to New York City, a place where it was OK to be gay, because I heard how people talked about my friend’s mom and her live-in “babysitter.” People snickered about their “lezzie” relationship. I realized the two women were indeed a couple when I was in sixth grade and visited my friend’s house and saw that his mom and the babysitter shared a bedroom with a beaded curtain and a waterbed.

In junior high and high school, when other girls my age liked boys and were going through the rituals of the first date and meeting someone’s parents and breaking up and making up, I wasn’t able to take part in that era of discovery. I had crushes on girls, but I kept them to myself. I Iived in a fantasy world for all those years, imagining what it might be like to go on a date with a girl I liked, or to buy her flowers or, better yet, a heart-shaped box of Russell Stover chocolates. That was the epitome of romance for me.

Years later, after I moved to New York City, I did give a girlfriend a giant heart-shaped box of Russell Stover chocolates — sadly, I didn’t get the huge reaction I was hoping for, and that relationship, and a few others, didn’t go anywhere.

Then I met Rosella, who made our relationship difficult by being Canadian and living in Montreal.

Rosella and I met online on February 13, 2002 (and when she responded to my ad, she didn’t realize I lived in the United States). We first talked on the phone on March 13, 2002, and we first met in person on April 13, 2002, when she came to visit me for what turned out to be an eight-day date during which I took her to the Sock Man, a store on St. Marks Place that sells only socks, and Central Park, where we rode the carousel. It was a wonderfully romantic time.

Unlike the people on *The Bachelor*, who date, fall in love, and wind up engaged in less than three months, Rosella and I dated, fell in love, and embarked on a long-distance relationship that would go on for well over a decade — the separation was torturous, and it wasn’t by choice.

We knew we wanted to live together in New York a couple of years into our relationship, but I couldn’t just marry Rosella and bring her here. Gay marriage wasn’t legal on a federal level yet, so I didn’t have the right to sponsor her to live in the country.

Throwing my career aside for love, I became a freelance writer in 2005 so that I could spend weeks, sometimes months, in Montreal with Rosella. Though I have proven to be incapable of learning French, and I hate long, cold winters, I had reached the point where I thought I would have to move to Canada because I had so much trouble getting through all the time when we weren’t together.

But everything changed for us after the Defense of Marriage Act was repealed in 2013. Rosella and I got married in a small ceremony near the carousel we rode in Central Park on that magical eight-day date. In the midst of exchanging our vows, we read letters we had written to each other. In hers, Rosella revealed how she felt about my taking her to the Sock Man when we first met. “It’s a store that sells just socks, and you were so excited about it. I thought it was weird but endearing,” she shared, noting that she had bought two pairs of socks she hadn’t needed just to be nice.

Even after our wedding, Rosella and I still didn’t live together full time until we completed the immigration process. She finally crossed the border as a permanent resident of the United States on February 13, 2016, the fourteen-year anniversary of the day we first met online.

When I think back on all of this, it is clear why I find so much joy in watching whirlwind romances unfold on *The Bachelor*. I don’t know how smart it is to get engaged to someone you have only known for weeks, but I love that they have the freedom to be crazy like that.

I explain all this to Rosella. While she is touched by my newfound introspection, she is still judging me for my taste in television (though in a loving way, of course).

“I just don’t want you wasting your time on this garbage,” she says.

I hate to throw Rosella under the bus, but you should have seen the big smile on her beautiful face when Nick proposed to Vanessa when he was the bachelor last season. I caught her looking up from her laptop, beaming like she had been rooting for these two to get together all along.

“Well, that’s because Vanessa is Italian and from Montreal like me,” Rosella replies when I remind her about her obvious delight at Nick and Vanessa’s engagement (which, unfortunately, ended a few months later, as many *Bachelor*-fueled romances are wont to do).

I point out that Rosella might also be a fan of the show.

I don’t believe her, and I hope the day will come when my wife is open and vulnerable enough to admit that she likes *The Bachelor*, too.

*Christine Champagne is a New York City–based writer who has written for vanityfair.com,* Variety, *and other places. You can follow her on Twitter (1).*