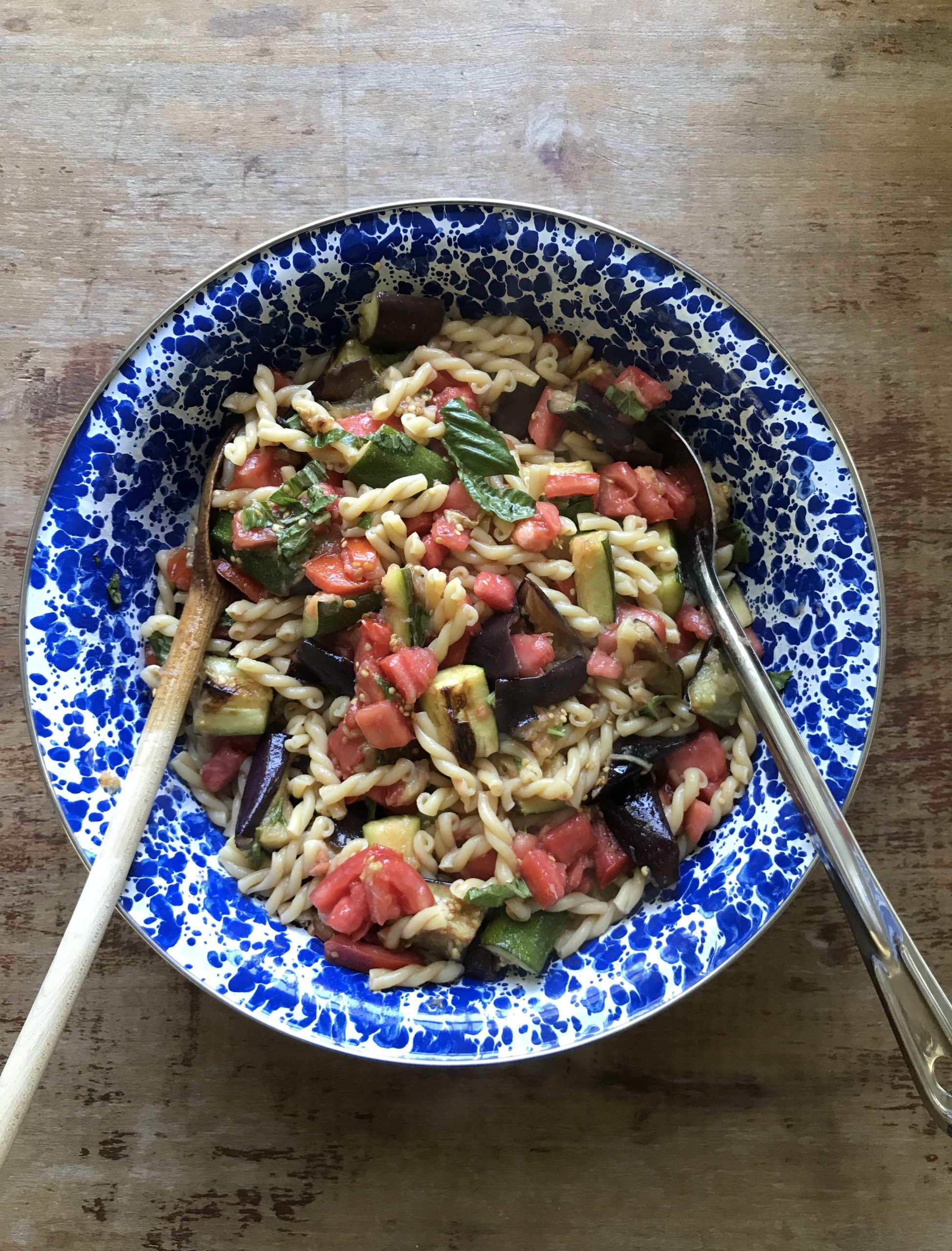 My new cookbook, * (3)*, is filled with recipes, essays, and lists of ideas from a diverse group of chefs, writers, and activists to help you get involved. In the wake of the election, I found that feeding people, the thing I love to do and have dedicated my life to, was also a way for me to resist. I started cooking for activists in my community and figuring out other ways to use food as a means for connection, progress, and action. I reached out to other members of the food community to find out ways they used food as a form of activism. The result is Feed the Resistance, which is as much a response to the call to action as it is an amplifier: we want to inspire you to do something on your own.

And the food on the table? At its best, it should be fresh and healthy, easy to prepare, and comfortable to eat. It should feel like you want to share it. A great example is the recipe below. It’s a simple, flexible baked pasta filled with vegetables and topped with melted, slightly crispy cheese. You can leave off the cheese if you’re vegan, change the type of pasta if you’re gluten-free, skip the pasta altogether if you want, add some cooked sausage, swap one vegetable for something else. Whatever. The key isn’t the food itself, it’s the feeling of making something easy and comforting that serves your needs and gives you a reason to gather people around your table.

You can also, of course, bring it to someone else’s table. I make this pasta, or something like it, often for my local chapter of Citizen Action of New York in Kingston, New York, where I run the “Food Team.” The grassroots organization works on issues like ensuring after-school programs, providing affordable health care, and promoting racial justice. Running the Food Team is one of the most practical ways I resist. Between my network of fellow home cooks in my area and myself, we make sure every meeting, phone-banking session, training, and more is supplied with something good to eat. This food saves the organization money, provides the members with healthy food, helps to incentivize both new and seasoned activists to show up, and also acts as a palpable reminder that their work is appreciated.

Whether you’re preparing meals for activists, bringing people together in your home, or cooking for yourself as a meaningful act of self-care, being in the kitchen is a tangible and effective way to literally feed the resistance.

This is a very flexible recipe. Yes, you can use all mozzarella instead of two types of cheese (when I made this, I had a bit of Fontina kicking around in the fridge and thought this would be a good home for it). You can also leave out the cheese entirely to make this vegan (if you do that, you can skip baking the pasta, or you could top with coarse bread crumbs that you’ve mixed with olive oil and garlic; broil with those on top until crunchy). You could mix in some crumbled cooked Italian sausage. You can swap the pasta for whole-wheat pasta, your favorite type of gluten-free pasta, or just leave out the pasta and serve the vegetable mixture on top of grilled or toasted bread, polenta, or rice. The vegetables could also be a nice side dish for roast chicken, grilled fish, or whatever else you might be having for dinner.

1 pound short pasta (penne, ziti, gemelli, fusilli … whatever you like!)

Preheat your broiler to high, and adjust your oven rack so that it’s about 6 inches from the heat source. Set a large pot of water on the stove to boil.

Place the tomatoes, garlic, basil, the 1/4 cup of olive oil, the vinegar, and 2 teaspoons of salt in a large bowl, and mix well to combine. Let the tomatoes relax while you get everything else going.

Place the zucchini and eggplant on a large baking sheet, drizzle with the remaining 3 tablespoons of olive oil, and sprinkle with 1 teaspoon kosher salt. Use your hands to mix everything well, and spread the vegetables out so that they’re in a nice, even layer. Broil the vegetables, stirring them now and then, until softened and browned in spots, about 15 minutes total depending on the strength of your broiler (keep an eye on these!). Transfer the vegetables to the bowl with the tomatoes, and stir well to combine. Keep the broiler on.

Generously salt the boiling water (this is how you will season your pasta!), and drop the pasta in the water. Give it a good stir, and then boil until just cooked through, about 1 minute less than the package instructs. Drain the pasta, add it to the bowl with all the vegetables, and stir well to combine. If you’re vegan, you can stop here and serve it and call it a day.