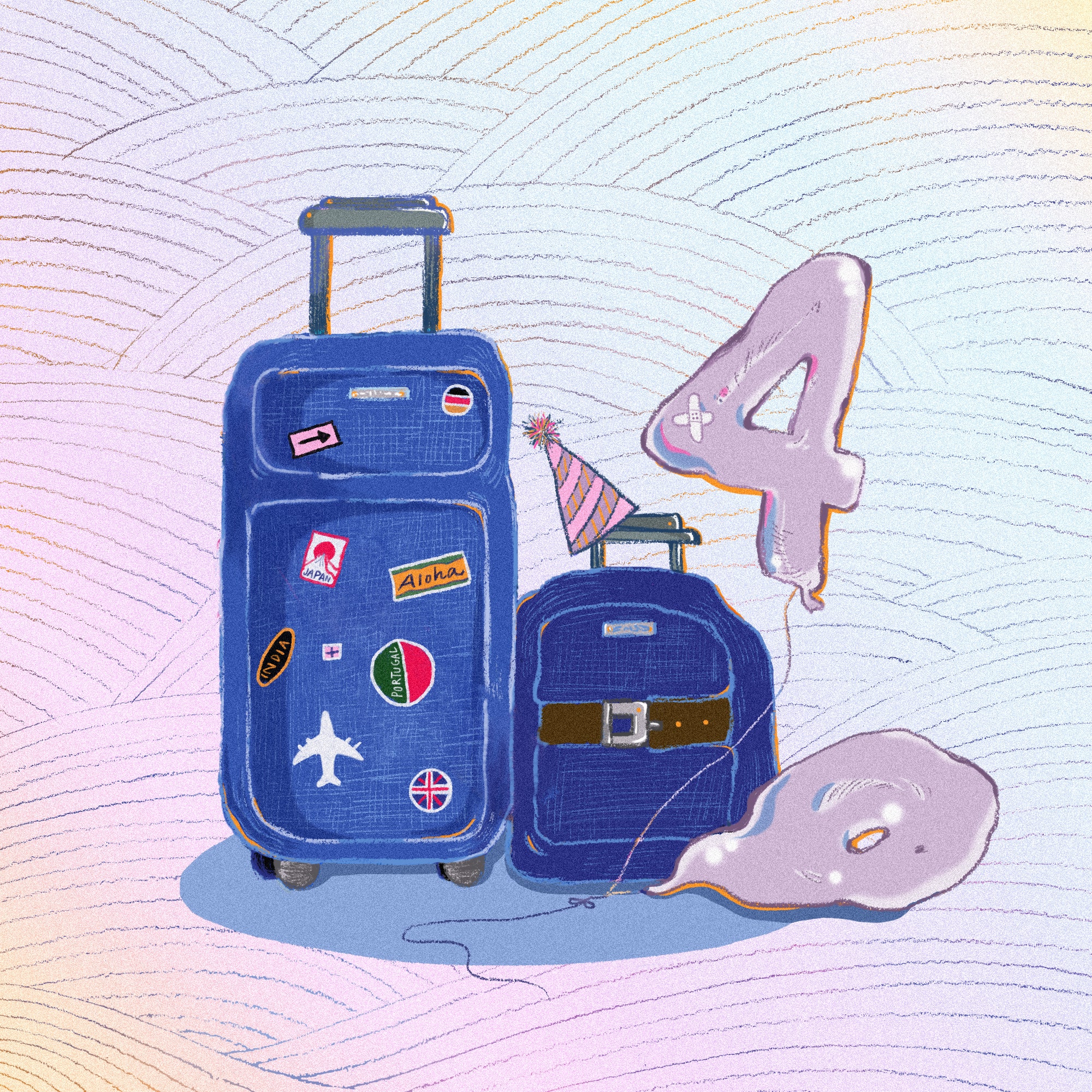 A couple of years before I turned 40, I arrogantly assumed I was on some sort of preordained path. I figured by that point I’d have two kids before my fertility dipped into geriatric territory, and I’d be making six figures to pay for two private-school educations and a nanny, whom I would constantly worry my children were spending too much time with (because, you know, that kind of salary in New York doesn’t come without punishing hours and unrelenting face time at the office). This wasn’t exactly how I pictured my future self as I sat in my teenage bedroom, exacting my revenge on all the other teenagers who didn’t “get” Ani DiFranco while I flipped through brochures for East Coast colleges. But my vision of what 40 would look like was always sort of … elastic. You think you don’t want to become your mother, but then you get to your mom’s age and you realize, *Oh, she kind of had it right all along.* Besides, the path I saw ahead of me was still paved and straightforward and looked pretty damn good standing in front of it.

Like most female Gen-Xers who realized all too late that having it all was total bullshit, I didn’t feel all that celebratory by the time this fairly unforgiving birthday rolled around. That summer, I had lost my big fancy job as an editor at a big fancy New York magazine due to “cost-cutting” measures (a.k.a. the decline of print), oh, and I had also been told by one of my former assistants that people are “over words.” My husband and I tried and failed at having at a second child through (1), a process that left my body — and brain, for that matter — feeling what I can only describe as lumpy. I was physically exhausted from taking all those meds, out of a job, and, worse, trying to wrestle with the idea that I wasn’t going to have the life I idiotically thought I had put forth the effort to have. (Anyone over 40 will tell you this is a stupid-ass assumption, since your world, whoever you are, will be upended at some point, sometime in your life. Probably more than once.)

What I should have done was dedicate some appropriate headspace to all these midlife psychological grenades. Instead, I went down a rabbit hole about what the hell kind of trip to plan for my 40th birthday. That big fancy editor job was at a travel magazine, even though I had only casually covered travel as an editor before that gig. One minute I was talking about male athleisure wear and editing a piece on a Japanese porn star at a men’s magazine. The next I was working with people who had gone to Southeast Asia. Twice. In one year. What’s worse, I was managing most of them. It’s not that I was some rube who had never gotten out of these here United States, but, if I’m being honest, I always felt like kind of an impostor at that job. I hadn’t been to Africa, but I could tell you which safari company you should book with. I may have pronounced Oaxaca O-AX-A-CA once. In my interview.

Anyway, a big part of my job was trying to identify new trends in travel. And the newfound pressure among people my age to mark their 40th with a trip that’s beyond the let’s-go-away-to-Europe variety was what we call “cresting” in the editorial world. I’m fairly certain this all stems from people my age realizing they got it all wrong in their twenties and early thirties — nearly panting over an Instagram post of some 25-year-old coworker standing next to Machu Picchu in a bikini. On, like, Labor Day weekend.

The trend was only solidified when one of my closest, oldest friends sent me a text: “Come take a river cruise in Amsterdam with me for my 40th!” Her husband, mom, and a few other couples were all going. *Seems … cool?* I thought. But also kind of, I don’t know, esoteric? I loved this woman. (One night, when we were in high school, we slept in a gas station because we thought it would be cool to stay out all night — we have history.) But floating down a river in Amsterdam when temperatures were still hovering in the low 50s seemed like a chore. A couple weeks before that, I had another friend from college who managed to get six couples to lay out their own cash for airfare and hotel rooms (never mind childcare) so they could wreck themselves for an entire weekend in Miami. I think a yacht was involved at some point. I can’t imagine getting a dozen friends to come to my Super Bowl party, much less fly coach for me.

As far as I could tell, all based on totally anecdotal evidence, much like planning a wedding, there are a few variations to work with when it comes to planning the 40th-birthday trip, or what the Internet refers to as a “destination party.” (1) It has to be somewhere that will prompt all your friends to ask, “Wait, where is that again?” (“I heard Dakar is cool!”) Or (2) it has to fall in that super aspirational Venn diagram of costing a fortune and being bucket-listy in some ridiculous way that emulates how the Internet has ruined us all. (“Let’s eat only at counters in Tokyo for two weeks straight!”) Or (3) it has to prove, much like your post-prom hotel-room party, that you’re super popular and well loved and people are willing to go somewhere that’s not that awesome just to get maximum people to commit. (“Please plan on spending your only two days off during the week with me and some killer bocce courts in the glorious … Catskills!”) Or (4) it has to be centered around a physical challenge. (Climbing Mt. Kilimanjaro is the new buying a Corvette for men post-45 — another white-hot trend in travel.)

I didn’t want to mirror any of those trips, exactly. (One of the especially annoying habits of a travel editor is always trying to reinvent the wheel, so it looks as if you’re discovering a better, smarter way to do LA, or something.) But I did want the distraction of planning a let’s-get-away-from-the-shitstorm-and-go-somewhere-with-good-wine trip. Even after I lost my job — actually, especially after I lost my job — I thought I wanted to drink at noon and eat hardly pasteurized cheese and be about as far away from Brooklyn and school drop-off as the moon. We looked at Portugal. Then Tokyo. Then our bank account. Then we thought about hiking Yosemite, trying to use the trip as a motivator to finally get really fit. (Because if you’re out of a job and only have one kid, you better have abs, with all that time on your hands.) Then we looked at our bank account again. I don’t think we ever officially said “Let’s forget this.” But I do think we realized maybe this wasn’t the time to “get away from it all,” that dealing with everything that happened meant staying put and picking the gravel out from our knees and cheeks after face-planting in life.

As much as I appreciate how millennials are valuing experiences over stuff — quick to buy a pair of heels from Everlane instead of Prada so that trip to Bogotá can come together — I think I realized there’s something about the expectations we’re pinning on these celebratory trips that feels obnoxious. Or, rather, masochistic. We invest so much emotional capital into travel. We expect big milestone trips like these to reconnect us with someone or renew us or give us a greater, religious perspective on our own lives. And when a bucket-list adventure does unfold like this, all that internal change is palpable in a way that 100 yoga classes or juice cleanses will never come close to. But when a vacation goes to bits and doesn’t deliver in the way your Pinterest board promised it would, the disappointment is crushing, which is only compounded by this overriding pressure to be festive. Abroad, no less.

Or maybe I feel this way because 40 now feels like kind of a lame goalpost. We don’t have it all figured out by the time we hit this tidy little age. If anything, our lives are wrecks, as we’re having kids later in life and our respective industries are being disrupted by twenty-year-olds who are giving office tutorials on how to use a dancing-cat GIF on Insta Stories. What’s worse is we actually want to know.

My husband and I came close to booking that road trip in Portugal but then decided to bag it because I’d just feel guilty the whole time about spending money we don’t have and being away from our kid, celebrating a year that wasn’t all that awesome. I opted instead for therapy. And found an acupuncturist who told me my nervous system was kind of fried. I’d be lying if I said I figured it all out on her table with needles sticking out of my feet, or sitting in my therapist’s office bawling my eyes out. Figuring out your shit is not linear. But I did notice I began to have more headspace. And I wasn’t as physically wiped out on the weekend when my daughter wanted me to play tag with her. I didn’t reach for the bottle of wine every night (see fried nerves above). I had more ideas about what I wanted to write (and found out that people might want to pay me for that) because I wasn’t checking my email every twenty minutes.

On my actual birthday, my brother surprised me out of nowhere. He hates to fly and hadn’t been to New York since my now-six-year-old daughter was born. We drank a lot of whiskey and ate pasta in my kitchen while my daughter bounced around the living room. Portugal could wait. It’ll be there when I’m 41.

*Candice Rainey is a writer living in Salt Lake City, Utah. She’s working on her first novel and a 1970s split-level ranch that will be done in, like, 2024. You can follow her (2) on Instagram, though she’s still unsure how to use GIFs in Stories.*