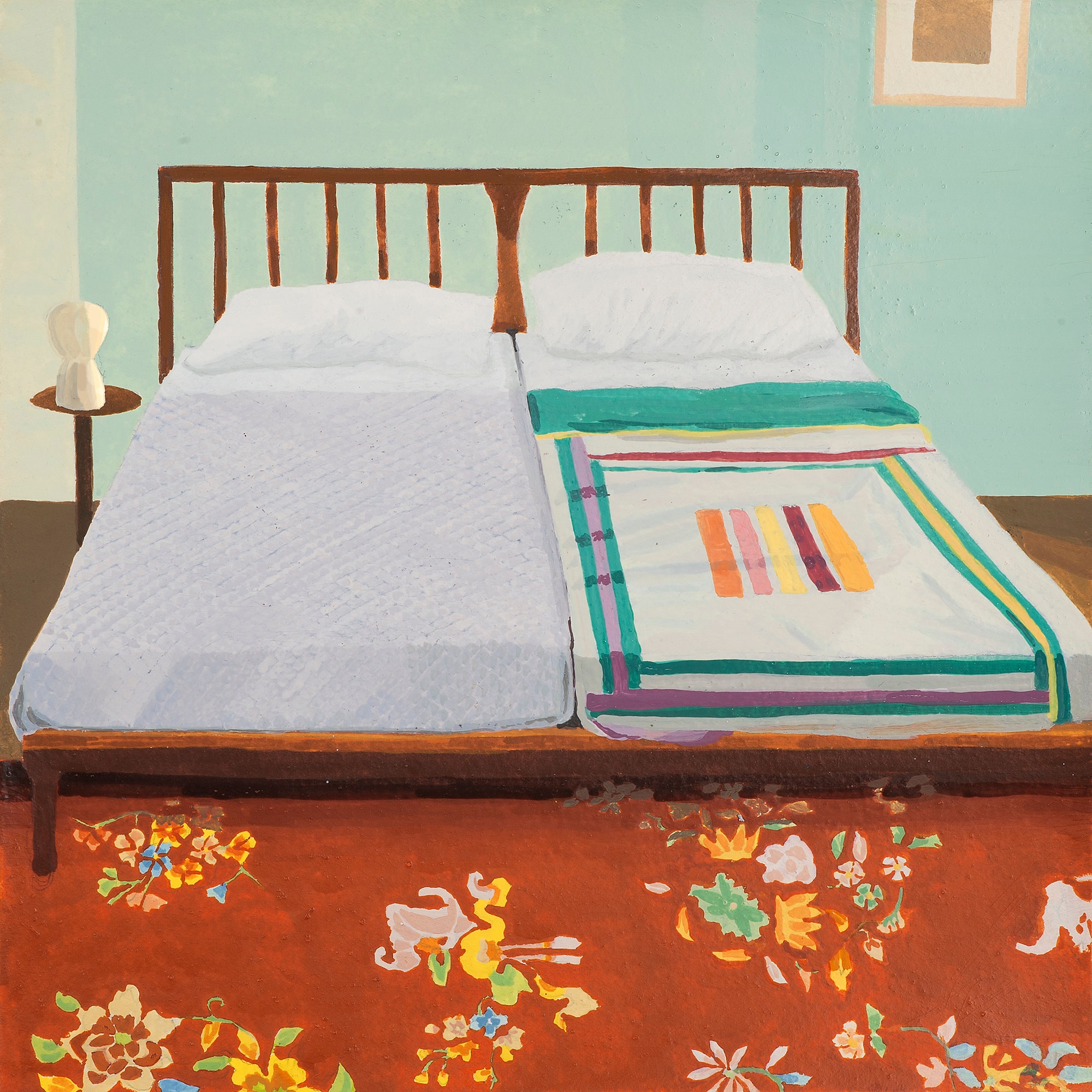 You would have thought I’d announced we were separating when I posted a photo of my husband’s and my new bed linens on Instagram. *Wait … what’s going on here??? Tell me more about this bedding … Do you each have your own blanket??????* The questions flooded in. On the surface they seemed relatively benign, but the excess of question marks seemed to imply an underlying question about our relationship: “Are you guys OK?”

We were OK. We were *great*, actually. In our new house, in our new city, we had purchased two twin-size duvets for our queen-size bed. I could have gone on, explained more, but there wasn’t enough room in the comments. This bedding was the latest plot point in the nearly twenty-year narrative of where, how, and with whom my husband and I have slept.

When we met, I was eighteen and he was twenty-three. We didn’t live in the same city, and spent the first year of our relationship living in the words we exchanged on our screens and the sound of each other’s voices on the telephone. I moved across the country and into his apartment a year later, to begin my junior year of college at a new school. We married soon after I graduated. We never had a dating phase, or the pretense of separate apartments, of spending some nights at his and some nights at mine. There was only ever an *ours*.

Five years into our cohabitation, after 1,826 nights in our queen-size bed, we could no longer sleep together. I mean this both literally and figuratively. Even though I was only twenty-five at the time, I’d begun to have night sweats and wanted nothing to touch me, while he was cold and wanted extra blankets. I also wanted to sleep with a woman, and he agreed to let me explore this desire as long as I didn’t actually *sleep* with anyone else. I could go on dates. I could fool around, as long as I returned home at night to sleep in our bed. Sure enough, the distance created by this arrangement brought sex back to our bed, too. But the sweating continued, and as the open relationship began to produce jealousy and hurt feelings, the sweat commingled with tears. Our bed was saturated with frustration and loss.

And so we began sleeping in separate beds in separate apartments in separate cities. It was all in the present tense: *separate*. We told ourselves it was what our careers demanded. We refused to say we were “separated.” Semantics aside, we were sleeping better.

My husband moved to New York, and I stayed in LA. The bed that had been ours became mine. But even when I dated other people, I rarely invited them to sleep in my bed. I kept it sacred, an altar to the religion of long-term relationships, in which I was still a believer. In New York, in my husband’s windowless bedroom, a wardrobe that had been left there by the prior tenant took up so much space that he only had room for a twin.

In America we call the smallest bed a *twin*, whereas in England they call it a *single*. Calling it a single makes a lot more sense, since it’s a bed for one person. Calling it a twin assumes there should be two identical beds. It seems to imply that you should never be sleeping alone. And yet there is a chasteness to twin beds. They aren’t for sex, they’re for sleeping. In fact, during a particularly Puritanical period in American broadcasting, the Hays Code forbid even married couples to be shown onscreen in bed together. That’s why Lucille Ball and Desi Arnaz — who were married in real life — slept like brother and sister in their twin beds on *I Love Lucy*.

Knowing that I’d be visiting every couple of months, my husband tipped the wardrobe on its side, bought a full-size IKEA mattress, and placed it on top so we’d have room to sleep together. I was grateful, if not a little afraid each time we laid on it that it would collapse under our weight.

Like the twin, the full-size mattress also goes by another name: the *double*. After sleeping on a queen for so many years, the double felt cramped, especially when we were trying to extricate ourselves from each other. The open relationship was our strategy for trying to reclaim the autonomy we’d given up to build our partnership. We hoped that it would help us feel like two singles *together*.

But his mattress worked fine. We only had to share it for a couple of nights at a time while I was visiting, so I didn’t mind snuggling, especially in the winter months, when the landlord didn’t turn the heat on. He didn’t share it with anyone else when I wasn’t there, until he did, and I shared mine as well, and everything we had made together threatened to come undone.

During this difficult time, I met a set of twins who slept in the same bed (a queen) at age 28. They both had long-distance boyfriends back in their native Greece, and worked long hours for little pay at architecture firms. Sleeping together was mainly out of frugality, they said. They weren’t ashamed about it, but they weren’t entirely comfortable, either. “I imagine sharing a bed with my future husband will feel something like this,” one of them said, “when love fades away.”

This statement made me particularly sad — that both love fading and bed sharing were foregone conclusions. But I couldn’t deny that the two things might be related.

After nearly three years apart, we decided to close the relationship as well as the geographical distance between us. We moved into a new apartment and got a new bed, and wondered how we could maintain just enough of the distance we’d had so as not to become the sexless married couple we had once been. The husband and wife the twins were resigned to being or becoming.

Early in our renewed cohabitation, we went on a trip Sweden. When we first walked into our hotel room, we saw two twin beds pushed together in the center of the room. We thought they’d run out of kings, and that the twins were a last-minute solution to accommodate a couple in a room intended for less intimate traveling partners. But after mentioning it to some of our Swedish friends, they reported that it was perfectly normal. Even in their own homes, many Scandinavians have separate bedding on the same bed.

When we went to sleep that night, I realized the genius of the arrangement. We could share the best parts of the sleeping experience and forgo some of the less desirable ones. As with so many things in the land of IKEA, a rational design solution had an emotional underbelly. There is a kind of melancholy romance to lying beside your loved one, wrapped in your individual blankets. You’re reminded that, in the end, we are all alone. But it’s a comfortable aloneness. Warm under the covers, you could be in close proximity to someone who loved you, who protected you, who would talk to you when you lay awake at night with the day’s worries and fears and joys. Separate bedding meant we could be there for each other without our individual needs stripping the other bare or weighing the other down. We could be close but separate, something I had struggled to understand was possible, and then to appreciate as desirable, for most of our marriage.

“We’ve got to try this at home,” we said. But for some reason we didn’t. It seemed wasteful to buy all new bedding when ours was still new. “Next time we need a new comforter,” we vowed.

Back home, we decided to have a baby. We knew how to have a third person in our relationship, we figured, and we began the process with zeal. We’d spent half of our lives trying not to get pregnant, and now we could let go of that fear — even embrace it! My night sweats had gone away, but their underlying cause had not. I discovered that I had endometriosis, and it was wreaking havoc on my hormones, my egg supply, and my fertility. After one laparoscopic surgery and two years of trying to conceive, our carefree sex became hopeful, became mechanical, became slightly hilarious and then a little sad. We finally conceived — not in a bed, but holding hands while our doctor squirted my husband’s centrifuge-spun semen from a tiny and appealingly pink bottle into my uterus while I reclined on a leather exam table. It was our fifteenth Valentine’s Day together.

The more my pregnancy progressed, the less space there was for both of us in our bed. The less space there was in my body for all my organs, the more I began to snore. We decided it would be best for my husband to sleep on the daybed we had purchased for our daughter’s nursery. It was bliss, those final huge months, when we’d cuddle before bed — and even have sex! And then retire to our separate quarters. We were well rested. We were glowing.

The baby came, and the sleep went. In the early weeks, my husband slept part of the night on the twin in our daughter’s room, so he could give her a bottle for the first night feeding. I slept on the sofa in the living room between the second and the third feedings. Once she was sleeping through the night, he and I began sharing a bed again. And when both of our immediate families relocated to a beautiful city in the Pacific Northwest, we decided to get rid of as much stuff as we could and pack up a truck with the crib, the sofa, and the bed, and move to that city to be closer to them. It was time for a new adventure.

And, finally, time for new bedding. H&M had a sale on washed-linen duvets and I bought two in a foggy gray, the color of the sky outside our bedroom window.

When not being slept in, the bed looks tidy. There is something satisfying about folding each twin duvet in half in the morning and trying to line up their folded edges in the middle of the mattress, allowing them to touch but not overlap. This is the way I want my marriage itself to be.