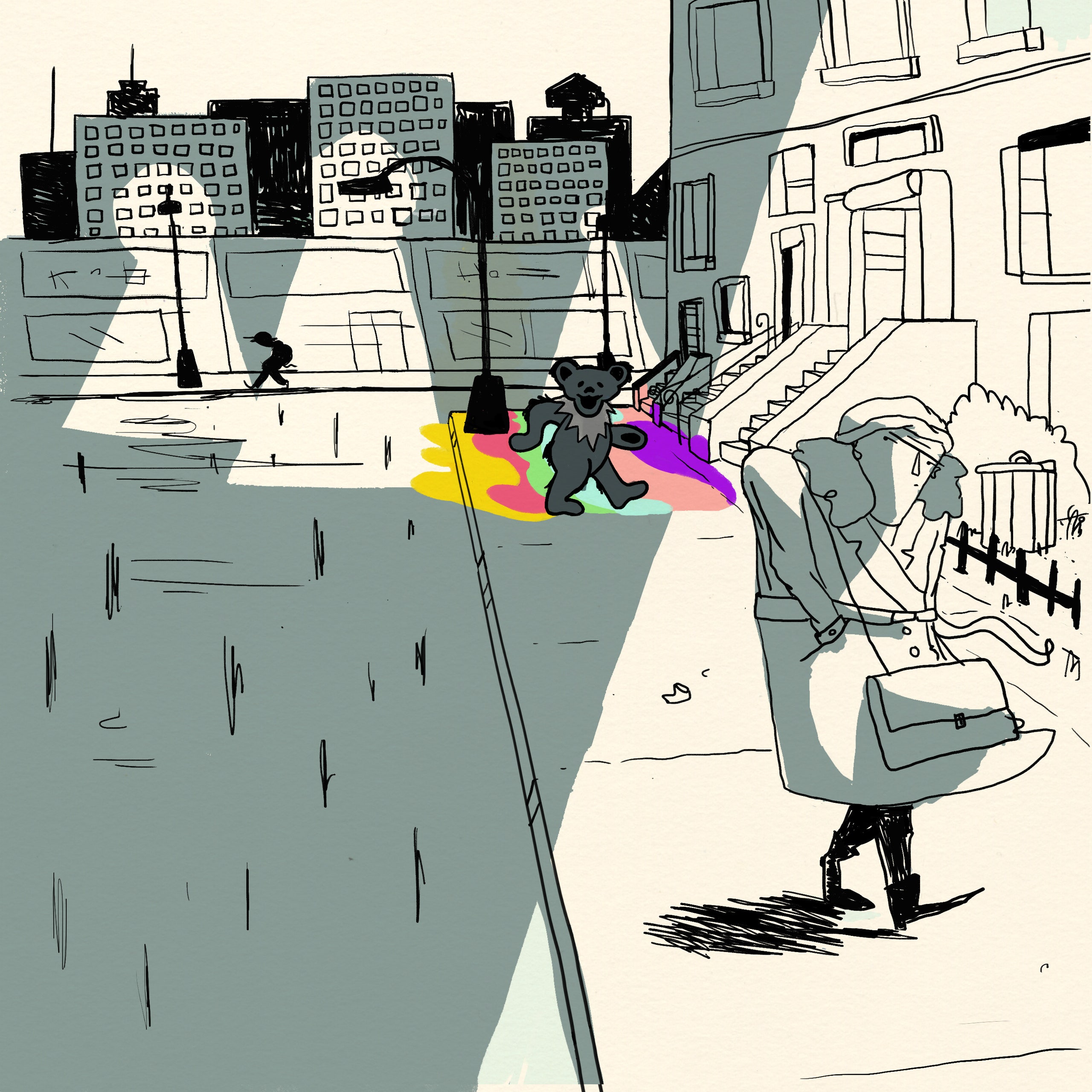 My favorite thing to do as a kid killing time at a Grateful Dead concert was watching the fans from backstage. Their bodies pressed up against the railing, faces looking at the band, eyes entranced, some crying, some laughing … My young mind was equally entranced! I used to think to myself: *How has this person lost control of themselves, stuck there staring at the stage or flailing about in the aisles?*

The culture at Grateful Dead shows was different for the band than the fans; there was an “us and them” mentality between backstage and concertgoers. I mean, I had a pass, and they still wanted miracles. Not surprisingly, I ended up with a weariness of Deadheads, because I’d always been one of “Jerry’s kid’s.” Sometimes a fan would get me alone and say trippy shit about the deep cosmic source of Grateful Dead music or what specific horseman of the apocalypse was coming.

I felt honored to be told all this really exclusive information, only available to people on LSD, apparently. It was probably very good for me to be given so many deep soul hugs by the velvet-clad earth mothers, too. Alas, it was still all about the band at the end of the day, and I wanted to find my own meaning.

In high school, Grateful Dead music was probably the least cool thing you could be into, as far as I was concerned. I remember giving Jerry a hard time for the clothes he was wearing. This was when rock stars were supposed to be glamorous … think David Lee Roth. I was so disappointed that my dad wasn’t the cool kind of dancing, spandex-clad rock star and instead wore corduroy pants with orthopedic shoes. I wouldn’t even call him a rock star at that time, maybe “cult leader in absentia.” He must have thought my whining was hilarious, but I was dead serious.

Becoming a teenager and trying to rebel against my parents didn’t just mean wearing matching socks; it also meant rebelling against nearly an entire genre of music. This I regret because I naturally love music and missed out on really appreciating my father’s music while he was alive.

Instead, I got really into hip-hop music, which was and still is my antidote for that Grateful Dead residue. I certainly dug stuff like Peter Tosh, Led Zeppelin, and the Beach Boys. But I’d always stop just shy of getting into anything that was too similar to my dad’s work.

Mind you, it wasn’t that I hated the Dead. I just felt like if I listened to Grateful Dead like fans did, then there was the possibility that I would end up a Deadhead and become lost to the scene, absorbed and declared an untouchable by the band. I am half-joking here, but the roadies would’ve really given me shit!

When my dad died in 1995, everything changed. I was 20 and in art school, happily focused on my own pursuits, while my dad was playing arenas all over the country (except in Texas. Fuck Texas). Amid all the grief, we were inundated with lawsuits and drama.

Grateful Dead music went from being too close to home to being too emotionally charged. Suddenly I was listening to my father’s voice from beyond the grave, and it was all just too much, unlistenable. I’m not the only one who was too grief-stricken and angry to want to hear the music or watch videos of my dad after his passing. The grieving of the community went on way too long. Things were deteriorating because everyone was so distraught and weirded out about the abrupt end of the scene.

> The healing power of music is an accepted fact in the Grateful Dead
> scene, and I am experiencing it now.

Fast-forward to 2012, when my awesome and talented sister Annabelle decided she didn’t care for the administrative work of running our family LLC that manages the rights, so she asked me to do it. Here was the Grateful Dead again, being a drag!

So in order to be more prepared for my new role, I decided to go check out the state of the scene. I found new energy in conversations with Deadheads. They reminded me how many people care about my father’s legacy and what a special thing it is for them. They also let me know they were disappointed with the state of things and felt like no one cared, and I was beginning to agree. I asked them questions about what they wanted, what was missing, and how I could help. The most obvious symptom of neglect was my dad’s website, which was a static page with a sad Jerry photo and some broken links. The album artwork was unimpressive, too, and the previous management had resisted getting music on iTunes, misguidedly fearful of people cherry-picking songs instead of buying whole albums.

In the five years since this renewed inspiration took hold, not only did the most amazing website get created at (1), filled with all the stats and data that super-geeked-out fans crave, but we have also been slowly opening the floodgates, releasing recordings of Jerry Garcia Band shows and other unreleased music from Jerry’s side projects in the vault.

We are also releasing rare interviews with Jerry and beginning to share his prolific body of artwork with the public. Just in the past year, I have helped put over 30 albums from my dad’s back catalog online, where it’s downloadable. The fans are excited to be able to hear these recordings and thank me wholeheartedly. I am pleased that by helping to make the music more accessible, more people will discover something to love.

I try to listen to all the new releases and just enjoy the music, but it’s not always easy with so much history behind it all. I have learned what catharsis is all about; the pain of sitting through these songs is helping me get over it. I did some purposeful desensitization. I took this thing that had been a burden most of my life and embraced it. The healing power of music is an accepted fact in the Grateful Dead scene, and I am experiencing it now. I can give back to my dad and this scene by guarding their history, like a librarian or nun.

As an adult, I view Deadheads so differently than I did as a kid. They are freedom lovers, burrito sharers, and dream followers. I envy them, and I’m proud to say I’ve learned some of their secrets. I would tell you, but then they wouldn’t be secrets. For the rest of my life, I’ll look forward to hearing about new people discovering the Grateful Dead and how it will inevitably change their lives, too. Long Strange Trip

*Trixie Garcia is the president of the Jerry Garcia Family LLC and a board member for Grateful Dead Productions and the Rex Foundation. She is featured in the Grateful Dead documentary* Long Strange Trip, *which opens in theaters in New York and Los Angeles on May 26, and will be available for streaming worldwide on Amazon Prime Video on June 2. Trixie is currently living in Northern California and spending her free time gardening and trying to enjoy the moment.*