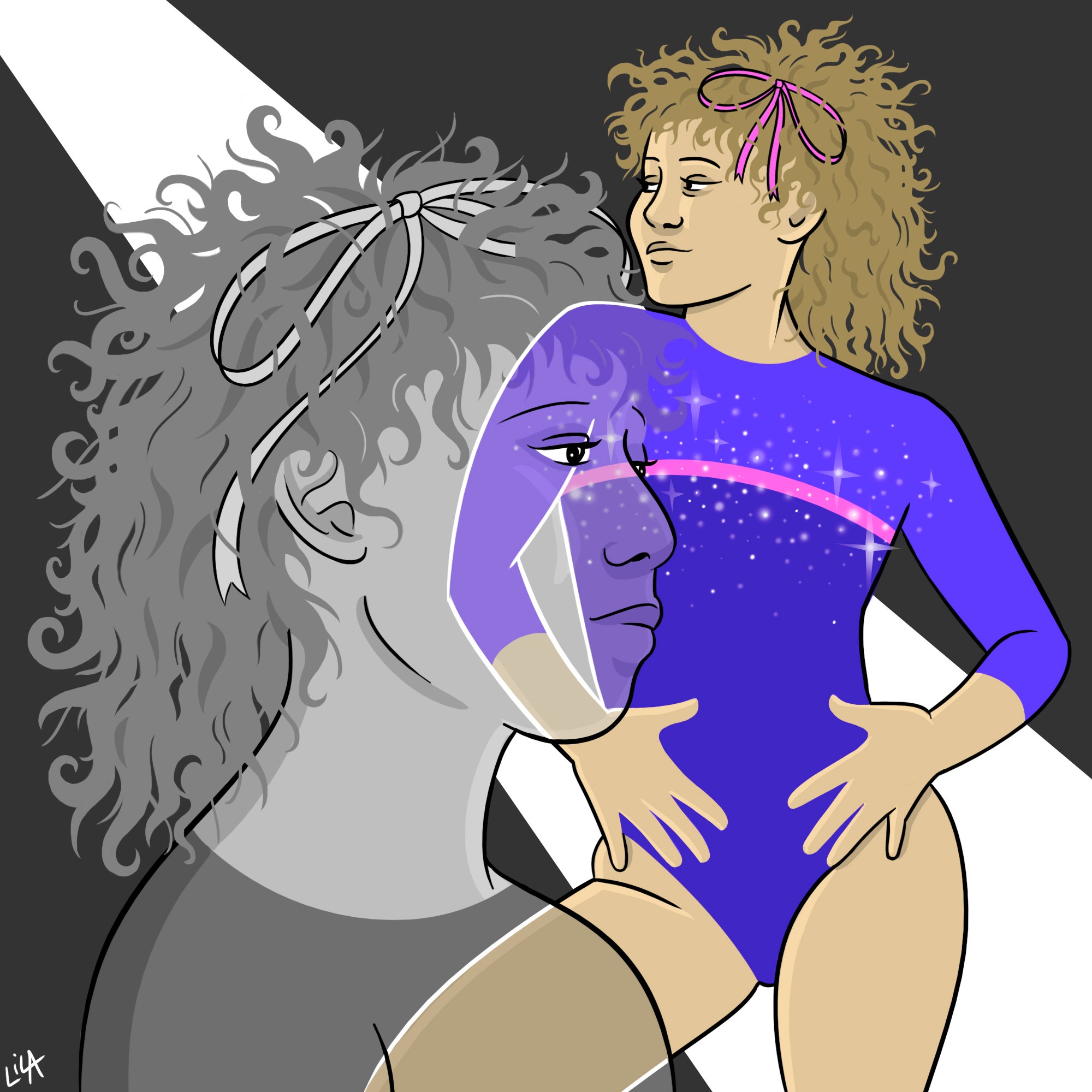 You’ve probably seen Katelyn Ohashi. Back in April, the 21-year-old UCLA junior did double layouts to iconic Michael Jackson hooks all over Facebook feeds to an audience of nearly 100 million viewers. It starts with a cool glance to the audience from beneath an imaginary “Smooth Criminal” hat, before alternating mind-bending gymnastic moves with slick moonwalks and finishing with a “Thriller”-like cackle. She performed the routine at fifteen meets this season and got a perfect 10 three times, but it wasn’t until the Pac-12 championships in March, which her college won for the eighteenth time, that the Internet really took notice.

I’ve gotten to see her perform since she was a teenager, winning national and international competitions as one of America’s most successful elite gymnasts, pegged for the Olympics at twelve years old. Yet there was a darker side to all the high scores and praise, one that came through the cracks of Ohashi’s intense focus and skill.

At age three, Ohashi started practicing gymnastics in her hometown of Seattle. However, to be able to become an elite gymnast, she needed to train at a place known for their Olympic champions, so at nine, she moved to Missouri with only her mother and the youngest of her three brothers. She attended Great American Gymnastics Experience (GAGE), a gym owned by head coach Al Fong, who in the ’80s was surrounded by controversy owing to a series of tragic athlete deaths (12) and (6)). When Ohashi finished tenth at her first elite nationals, at age twelve, she moved to Texas to attend World Olympic Gymnastics Academy (WOGA), also attended by Olympic gold medalists Madison Kocian, Nastia Liukin, and Carly Patterson. The gym was co-run by Nastia’s father, Valeri Liukin, (7).

It was at WOGA that Ohashi rose further up the ranks, winning competitions worldwide and being hailed as a prodigy. But she missed the age eligibility for the 2012 Olympics by mere months, meaning that she’d have to wait for another four years (until she was nineteen years old) before her first shot. In 2013, she won the American Cup, one of the biggest competitions in the world, at sixteen years old. (8), and you can see the commentators are ecstatic, in awe of the skills they’re witnessing. The girl atop the beam there is a world away from the one moonwalking to Michael Jackson.

The prevailing image of the ideal gymnasts is small, thin, and childlike, making it to the Olympics at barely sixteen years old before quickly disappearing. There’s a reason for this: they usually break under the unbearable pressure and unhealthy culture, both physically and mentally. Injuries ranging from ACL and rotator cuff tears to stress fractures are common.

For Carly Patterson, who won three medals at sixteen, the Athens 2004 Olympics were her final major competition; she was diagnosed with several bulging discs in her lower back soon after. “My doctor was like, ‘Carly, you really need to stop if you want to be able to walk when you get older,’” (5). London Olympic champion McKayla Maroney officially (9), citing numerous health issues including a concussion sustained before the Olympics in 2012, adrenal fatigue, depression, a broken right toe, a fractured shin, and knee problems. Even Simone Biles said last December that (1).

In 2017, Ohashi started posting diary entries from her competing days in an effort to start a conversation around body image surrounding the sport. “I’m used to waking up to the taste of blood or iron in my mouth, as if I might almost throw up from being so hungry,” she wrote in June 2010, at age thirteen. “I am completely and utterly in disgust with myself,” she wrote in November 2013, at age sixteen. “By 2012, I probably had like three stress reactions in my back,” she tells me today. “Two stress fractures in my fibula. My back is permanently messed up. I’ve had two shoulder surgeries.”

Ohashi’s 2013 American Cup win at sixteen years old should have been a victory that signaled the beginning of a long and successful road to the Olympics; instead, it ended up being the last meet of her elite career. “My world has completely changed,” she wrote in her diary that month. But she was contemplating her exit before then. “Abusive, restricting,” Ohashi says when I ask her to describe the culture of elite gymnastics in a few words.

After her American Cup win, Ohashi underwent shoulder surgery and then back surgery in 2014. Ohashi was unsure if she’d be able to compete again, so she started to contemplate the future, with the goal of going to college and learning to enjoy gymnastics on her own terms. So she called up Valorie Kondos Field (known as Miss Val), the head coach at UCLA, one of the most popular collegiate gymnastics programs. Field, a former dancer, had no prior experience in gymnastics before being hired by the UCLA team in 1983. She is known for her refreshing approach to the sport, championing individualism and enjoyment over titles, and encouraging gymnasts to treat the beam and floor as a stage.

It’s a reputation that is indicative of the difference between elite and collegiate gymnastics, where athletes study full time, are allowed to train a maximum of twenty hours a week, and competition is more about healthy consistency than extreme difficulty. Ohashi joined the UCLA Bruins gymnastics team for the 2015–16 season.

For her, the transition was difficult. “It’s so weird being in college, because it’s like, you get to cheer for literally everyone, and you’re supposed to,” Ohashi says. “But I would get yelled at simply for cheering for Simone . It was difficult because I think I finally had freedom, legit, *actual* freedom, for the first time.”

Since the trial of Larry Nassar — the former USA Gymnastics national-team doctor and convicted sexual abuser of over 250 young women and one young man — ended in January, there has been a conversation, thankfully the correct one, on how to ensure healthy environments for gymnasts. (2), “The sport’s not bad. It’s the people that were running the sport that were bad.” News outlets around the world have run stories exposing what happens behind closed doors. The entire board of USA Gymnastics resigned amid lawsuits brought by athletes like McKayla Maroney (Olympic medalist, 2012) who said the organization paid them to keep silent about abuse.

For UCLA’s February 4 meet against the University of Oklahoma, coaches Field and K.J. Kindler decided that something had to be done. With the help of their team, they put on Together We Rise, a ceremony held at the end of the meet where both coaches and athletes paid tribute to the bravery of the survivors telling their stories and pushing for change. When I ask Ohashi what it’s like to watch this movement after what she experienced, she says it’s a “huge step” to see the truth finally come to light. “College gymnastics is the reward we receive after years of abuse,” (3). “It’s the time of discovery, healing, learning, growing, and having the time of our lives.”

The weekend before I speak with her, UCLA won its seventh national championship. Ohashi describes the title as “not even real.” The team needed a 9.975 to win; teammate (10). Ohashi tied for the national title for floor exercise with her Michael Jackson routine, her beaming energy all season a stark contrast to the peak of her elite career.

The bassline of “The Way You Make Me Feel” thumped, as Ohashi took to the floor for the final time this season. On the sidelines, her team moonwalked along with her, Miss Val’s applause visible from across the room. The crowd cheered and clapped as she jumped, flipped, and turned effortlessly and exuberantly. “She takes us to a party,” one of the commentators said. Finishing with her always breathtaking split jump and cackle for the last time, she sprinted to her teammates, high-fiving them and disappearing into their loving embrace.

What’s different between now and then? “I’ve discovered things from being severely injured, to having gymnastics being taken away from me, and I realized this isn’t forever,” she says. “When I was in elite, living in black and white, whereas now I feel like I live more in full color.”

*Ella Donald is a journalist, university teacher, and writer from Brisbane, Australia. She is a regular contributor to* Australian GQ *and has also written for* Vanity Fair, The Guardian, Vice, *and* Glamour. *You can find her on (4) and her (11).*