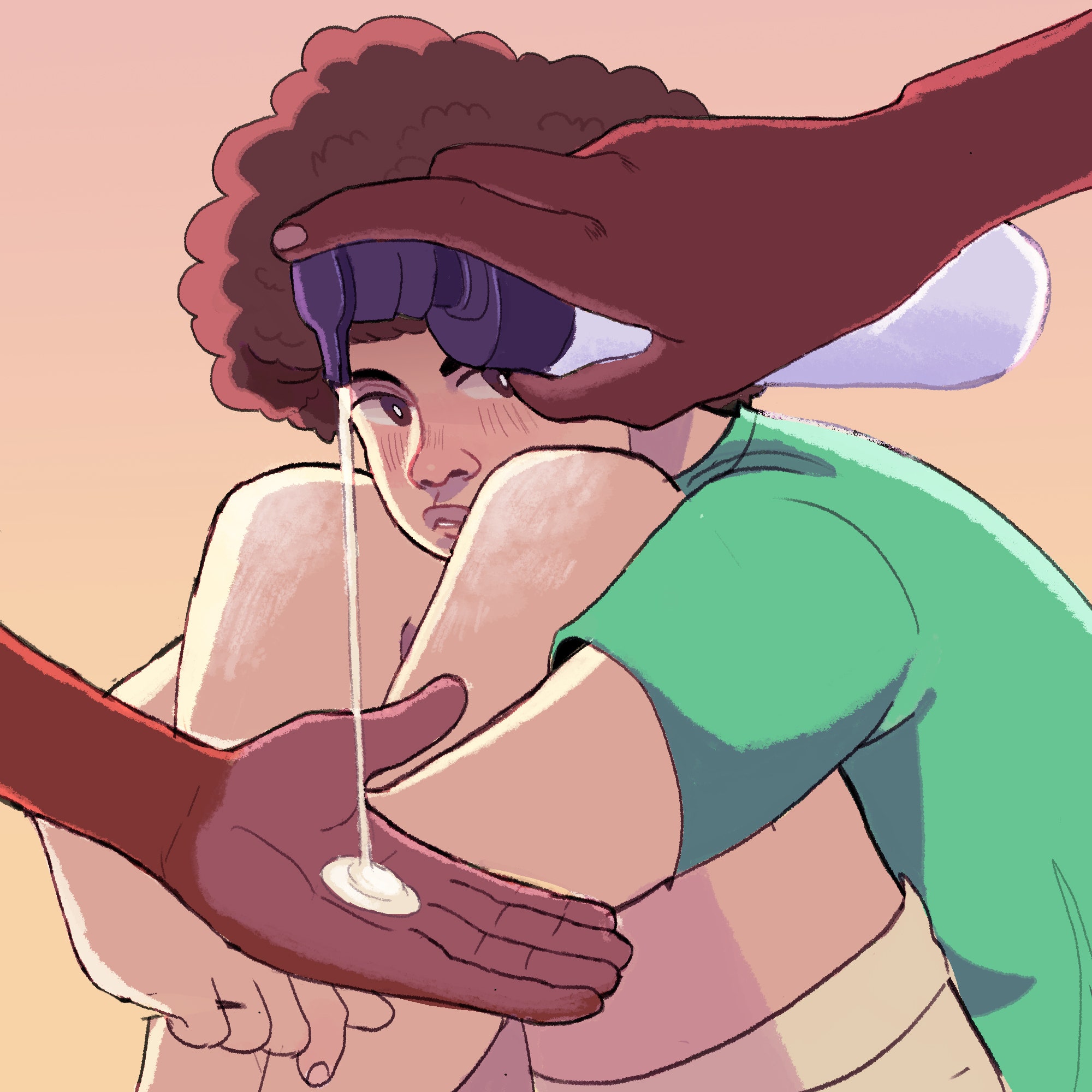 Of all the racial anxieties that plagued me throughout my half-Jewish, half-black childhood, few could compete with the stresses I experienced around lotion.

Most white people think of lotion merely as a way to occasionally hydrate your skin. But for black folks, it’s a necessity, a must-have, and practically a way of life. Lotion is something to be pumped out, distributed, and endlessly lathered. It must always be on hand and ready for action. It takes up an entire aisle at the drugstore and best bought in bulk and bounty. But mostly, lotion is the first line of defense against ash.

Ash, in short, is the layer of dead dry-skin cells that build up on everyone’s arms and legs, especially in summer. White people would simply call it “dry skin” — or maybe “dead skin,” if they’re feeling particular. The problem is that dead skin is actually very, very chalk white. For the fair-skinned, this can create a nuisance after a spell at the beach or a session in a tanning salon. But for black people, dead skin collects conspicuously on their limbs like ash — dusky, dusty, and begging to be removed.

And that’s where the lotion comes in. Because nothing suggests self-neglect like ashy skin. It’s a sign of classlessness that transcends age, sex, and location, though centuries of colorism ensure that the lightest-skinned black folks typically have the most access to wealth — and least ash!

When I lived in Harlem, I’d hear young kids fret about ash; my suburban uncle demanded it be destroyed; those bougie black woman on T*he Real Housewives of Potomac*, I’m sure, would rather leave home without their wigs than be caught with ashy skin; author Danzy Senna wrote extensively about ash and lotion in her landmark novel *Caucasia*; and Gabrielle Union (1) about her battles with the fancy-yet-tiny hotel lotion bottles meant to soothe ashy skin.

Ashiness is just one more burden that comes with blackness — like racism and poor customer service. Ashiness is real; #BlackSkinMatters. So lotion is applied, almost religiously, to darker skin to combat ash at the source. Find a bunch of black people in the sun (or at the office), and there’s certain to be a few mini-tubes of Nivea or Eucerin — the brand even cleverly added the word “ashy” to their labels — among them.

The problem for me is, because my skin is the color of caramel Frappuccino, I was never dark enough to truly get ashy. Some people might consider this a blessing — one less step in my highly negligent daily skin-care routine. But it actually only further isolated me from the black folks around me. The feeling was most acute at summer camp, which I fanatically attended in heavily wooded areas across northern California for most of my childhood. My strongest allegiance was to Camp Mendocino, which — as the name suggests — was set in Mendocino County, where the marijuana grew tall and the redwoods taller.

The camp was operated by the Boys & Girls Club of San Francisco and drew a motley crew of poor black and brown kids from the inner city, working-class whites from the South Bay, mildly accented Chicanos from the Mission District, and mixed-multi types like myself. I was usually the only Jew, and, this being Northern California, it was mostly viewed with indifference or as something exotic, like, say, homeopathy or vegetarianism.

Most of the camp counselors were black and typically came heavily armed with vast supplies of lotion (along with other era must-haves, like Rick James mixtapes and spray bottles of “activator”). Each afternoon, after shower time and before flag-raising, the black campers would line up to be lathered while their elders instilled in them the importance of proper skin care and moisturizing. It made for a curious, if not comedic, scene; these muscly, tracksuit-wearing brothers talking up amateur dermatology to their younger — and worryingly — ashier selves.

And then there was me. Left on the sidelines, yet again denied doses of much-needed male bonding along with a soothing coat of Palmolive. “You too *light-skinned*,” the counselors would say, “you ain’t got no ash.” And, defeated, I generally agreed.

Yet while I wasn’t exactly dark-skinned enough at Camp Mendocino, I often was at Camp Swig, which was nestled in the Santa Cruz Mountains about 90 minutes south of San Francisco. The camp was run by NFTY, one of the endless Jewish “federations” that operate similarly styled summer retreats across the world.

At Camp Swig, most of the kids were not black. In fact, besides my sister and me, none of them were. I remember a Korean kid who was conspicuously adopted by a Jewish family and formed, with us, the campwide melanin troika. Most of the kids were rich, including many who arrived from exotic-sounding Southern California locales such as Beverly Hills and Bel Air and spoke of their fathers who worked in “talent” and at “studios.” They were all thin and preppy and two-parented. And most would receive regular care packages of cookies and candy and other indulgences forbidden to fat kids like myself.

These were the days before nut allergies, and organic food, and gluten-free everything. So the care packages — usually meticulously wrapped and near hermetically sealed by mothers who, unlike mine, mothered for a living — would remind me yet again of the low rung I inhabited on the playing field of life.

The truth is, despite my Afro and brown skin and fat butt, I was surprisingly popular (though not enough to escape being called *nigger*, but let’s leave that for later). This was already a few years after my grandmother had made us Jewish, and I was well into the whole Moses and Abraham and Esther thing. And at Camp Swig, we were surrounded by it 24-7. The setup was in many ways quite similar to Camp Mendocino, though it was clearly intended for junior one-percenters. The cabins, for instance, had actual windows; the food was more hummus and schnitzel than roast beef and sloppy joes. And talent night involved Hebrew versions of Snoopy and improvised takes on Exodus rather than amateur rap crews and synchronized break-dance squads.

Yet even here — in the land where ashy skin never lay — there was lotion. In this case, it was suntan rather than moisturizing lotion. Vast vats of Coppertone and Banana Boat and Hawaiian Tropic. There were tubes and bottles and little sample packs, all neatly numbered by SPF degree to signify strength and seriousness and *importance*.

Being brown and growing up in the perpetual gray of San Francisco, I’d never really thought much of the sun — neither its tanning powers nor the multibillion-dollar consumer-products industry devoted to preventing its damaging rays. Yet clearly everyone else had, particularly the campers and counselors at Camp Swig.

And so once again, before swim time or playtime or really any time, lines would form, tubes would materialize, and the lotion ritualizing would begin. There was no place for me in these rituals either, however, because I was “too dark” to need suntan lotion. Or so I was repeatedly told. And much like at Camp Mendocino — where I was too light-skinned to get ashy — at Camp Swig, I faced the opposite conundrum: I was too dark to fully fit in.

I simply couldn’t win. So I would stand to the side, my skin naked and cracking, wondering what it would take for me to ever enjoy such topical pleasures. Years later, I discovered that both camps were wrong: when I failed to apply suntan lotion, my skin baked and died and scaled on my limbs to form a fine layer of (*YES!*) ash that begged for that slathering of Eucerin. Folks like me, it seems, *can* become ashy — so much so that there’s now an entire (2) devoted to (3) and the battle against ash.

I even discovered on a trip to Cuba that I could — GASP! — sunburn, though all that early lotion-deprivation has meant I’m usually the last person to lather up. Eventually, I accepted my light-skinned fate, and during my years living in Tel Aviv, I would apply a constant layer of SPF 20 to my face. I also — like Union — regularly swipe fancy bottles of lotion from posh hotels to keep my occasional ash at bay.

And so today — long after I stopped attending summer camp, and now blessed with a pair of (4) of my own — I wholly embrace my unique skin-care intersectionality and recognize the responsibilities that come with it. After all, if a deep-pocketed baller like Drake (who’s also a mixed-race Jew) can suffer from the r (5), so can I. So can everyone! Which means we could all probably use a daily slather of both Coppertone and Eucerin — whether black, white, or a shade of Frappuccino.

I always swore that if I ever became a father, I would never deny my kids moisturizing or suntan lotion, that they would know the joys of both tanning controls and ash prevention. So far, both of my boys are lighter-skinned than I ever was, which means that ashiness is fairly unlikely. But I was told the same thing when I was a kid, and my home today looks like an aisle straight out of CVS.

*David Kaufman is a writer and editor based in New York. He was formerly the global lifestyle editor at Quartz and editor in chief of* Alexa, *a lifestyle magazine from the* New York Post. *He lives in Manhattan with his husband and twin sons.*