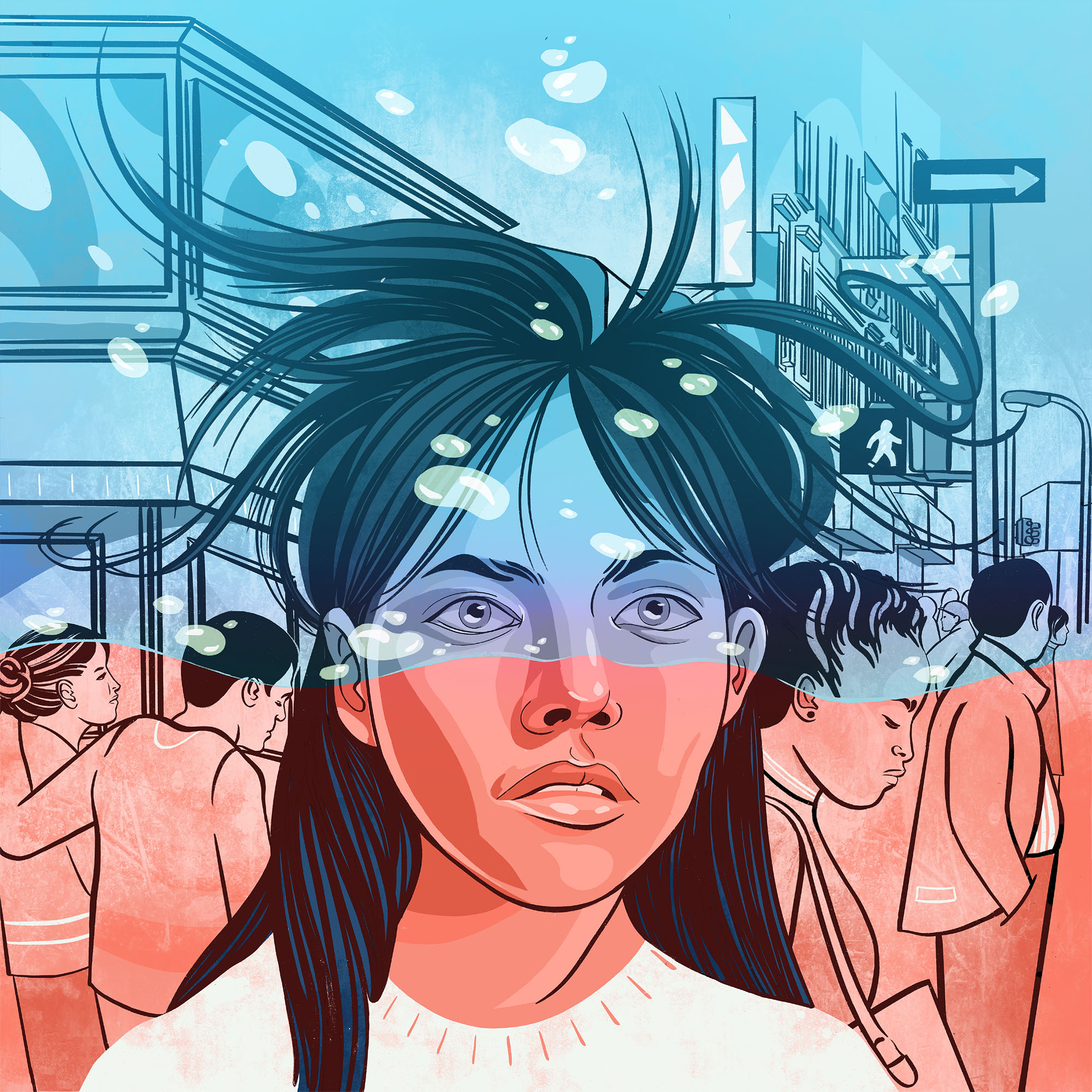 In 1998, I noticed I had sore armpits. They felt more achy than bruised, which seemed strange, because what is true now was true then: I don’t move a lot. And the soreness was not related to odd lumps or my glands.

Confused, I went to visit my family doctor.

Because my mother was a hypochondriac, Dr. Cotton saw me a lot. I say a lot, but I could say “the most,” or “every time I left the house it was either school or the doctor,” and it wouldn’t be hyperbole. In the second grade I listed “banana-flavored antibiotics” as my favorite drink.

“Lie down,” Dr. Cotton said gently. The familiar sound of the crinkly white paper instantly relaxed me. “What have you been up to?” she asked. “Still working at your dad’s office?”

“OK, where is the problem.”

I lifted my arm and pointed into the pit. “It’s really sore, right here. It’s been like this for a week, maybe a few weeks. I can’t take it anymore. I don’t feel a lump, but I’m fully prepared to biopsy.”

“You worry a lot, right, Kelly?” she inquired, as she pushed on the sore spot. I winced.

“Ow — yes. But nothing out of the ordinary.”

She gently lowered my arm back to the table and gave my leg a pat. “You can get up.”

“So, did I just pull a muscle or something?” I asked, hopefully.

“Kelly,” she started as she dried off her hands, “have you heard of panic disorder?”

The blood drained from my face, my arms got sweaty, my ears began ringing. I felt like I’d been insulted.

“They’re very common. Let’s do some bloodwork to be sure there isn’t anything else going on, but I’m pretty sure you’ve had panic disorder since you were twelve.”

“And you’re just telling me now?” I exclaimed, keeping my emotion sounding like a three when I was really feeling a nine.

“Well, I wasn’t going to suggest you were eventually going to get panic disorder if you weren’t.”

“OK. So will the armpit thing go away?”

“This is completely manageable.”

Yeah, she didn’t answer me. This means it is an incurable situation. I’d always hoped for some disease in my life to add some morose glamour. I took a lab sheet and a referral for a therapist from her hands and fled the office.

At my boyfriend’s gig that night, I was standing against the bar, holding my arm in the air and massaging my left armpit, when a frat jock stranger asked what I was doing. “Oh, this?” I pointed to my armpit. He nodded. “Not much, my armpits are sore. I’m also trying to figure out what I’m stressed about, because apparently it could be really fucking with me.” His eyebrows flew up as he made that falling-sound whistle and walked away.

“Hey! Kelly!” One of the bartenders, Joan, leaned toward me, shaking her head.

“You didn’t have to talk to that guy,” she said. “You don’t owe anyone an explanation.”

I thought about that for, like, half a second. “What?”

“When someone asks you a question, it doesn’t mean you have to answer. You don’t owe anyone anything.”

What? “You mean that jock guy?”

Joan sighed and eyeballed the band. “Are you still dating Reed?” I nodded. Her grimace marked her disapproval. “He’s really young.” He was 26, she was 26, I was 20. She laughed. “Look at him. He’s a boy.” I looked at Reed onstage; he seemed cute, but she said boy in such an evocative way. “Kelly, you need to date a man. Someone educated and wise. Stop dating these loser boys who aren’t doing anything with their lives.”

> From the very pit of my soul, I felt I was worthless and everyone knew
> it and I would never ever climb out.

Joan’s wisdom was coming at a time when I needed guidance the most, and maybe she was right. I decided to dump Reed, right after the show. There was no way I’d be so stressed if I had a real man in my life. Suddenly, my armpits felt lighter.

Joan touched my shoulder. “Hey, Ben’s here. Can you tell him I’m in the back cashing out?” Ben was Joan’s closest male friend. He looked like Ross from *Friends*, and just like Ross, he had a Ph.D. and was a part-time professor. Unlike Ross, he worked at not one but three of the fanciest restaurants in the city. Ben said hello, and I grabbed his face and stuck my tongue down his throat. That’s how you let a man know he’s dealing with a real woman.

The first few weeks of dating Ben were just what my armpits and worries about my impending future needed. My armpits loved that he had a newly leased car that never had to be jump-started; they loved that he lived in a rented house and not an apartment; but most of all my armpits loved that Ben did his own laundry in his own washing machine and his clothing never smelled like damp mildew.

I totally forgot about Dr. Cotton and the panic disorder. Joan was right — I mean, look, she totally hated me for listening so closely to her advice and taking her best friend away from her — but she was right. Ben was the man I needed.

After we had been dating for a month, Ben brought me to meet his mother. As we pulled up the driveway of her beautiful house, he gave me a “heads-up” type of prologue: “OK, so my dad left my mom about a month ago because he’s gay and my mom — you’ll like her, she’s very sweet — but because of that, she’s now crazy. She gets panic attacks. It’s pathetic.”

“Panic attacks are totally pathetic.” I force-laughed, my right hand shooting into my left armpit on pure reflex. Ben’s mom and I hit it off over iced teas in her backyard. We petted her corgis and discussed squirrels, *Cosmo*, *General Hospital*, and life while Ben stayed quiet in the hammock. The next afternoon, I called Ben. He sounded strange. “Can you meet me at the Sugarbowl?”

I walked into the coffeehouse and spotted Ben’s fro immediately. But beneath his studious shearling and plaid scarf, he looked grim.

“Kelly.” He leaned into the table. I took his hand, but he didn’t close his fingers around mine. I took it again, like, a do-over, but his fingers were dead. I stared at his open hand, guessing what was coming.

“I don’t think this is going to work.” My armpits rang.

“Well.” He sat back, pulling his hand slowly out of mine. Oh God. He took his hand away.

“Yesterday, while you were talking about your life to my mom, I couldn’t help thinking. You just graduated high school, and you really haven’t done … anything. What do you want to do? I mean, do you have any goals? I can tell you really like corgis, but you just work at your dad’s office and stay up on your computer at night.” The soreness turned into pain. Should I tell him I wanted to be a screenwriter and on those late nights I was trying to perfect the art of dialogue?

Ben forged on. “You’re a really great girl. I mean, you’re really, really great. And I can’t believe I’m dumping you. But I have to. I need to date someone who has a real life. A woman, you know? I mean, I have a Ph.D.”

By the time I pulled away from the parking meter, my vision was blurry. My body felt strange, electrified yet numb. I felt like everyone on the street was looking at me strangely. I didn’t feel like I was in my body anymore at all when a giant Safeway truck began to pull into my lane and I hit the curb, slamming on the brakes, coming to a stop with one wheel up on the sidewalk. Cars were honking. My heart was pounding. I began to cry.

When I got home, I opened the side door and called out a hello, but no one was there. I reached the top of the stairs, and from the very pit of my soul, I felt I was worthless and everyone knew it and I would never ever climb out. I felt like I was jailed inside my own sick body and my body was definitely going to kill me. I looked into my bedroom. It was a mess, clothing everywhere. I was a disaster. Pathetic. I felt like I’d lost my mind completely, and that’s when I realized: *This was a panic attack.*

I felt vomit rising and just barely made it to the toilet in time. Now I had lost my mind and I was throwing up. Every time I tried to go into my bedroom to lie down, I would throw up. I wasn’t sure how much time went by until I looked at the clock; I suddenly realized that no one would be home until eight o’clock that night. There was no way this could go on for three more hours. I would rather be dead.

For a week, my mom brought me onion-based foods and told me I would be fine, even when I finally admitted to her that Dr. Cotton had told me I had anxiety disorder. This was the woman who had once brought me to the doctor when she found a gray hair in my eyebrow. Days and nights blurred into each other, because I couldn’t sleep unless I was passing out from exhaustion. I specifically told my mom that she should commit me.

For a week, my mother told me I’d be fine and fed me, then she’d ask me for advice on outfits and tell me gossip about her friends as I lay in her bed, in my own personal hell.

On day eight, I realized no one had called for me. My life meant nothing.

On day nine, I stopped talking.

On day ten, my mom took me to see Dr. Cotton. She waited in the car.

“Kelly, what’s going on?” Dr. Cotton liked to start conversations before she even entered the room. Her voice was so calm and so loud at the same time.

“Panic attack,” I said as she closed the door.

Her mouth dropped. I nodded, feeling numb to the embarrassment. Dr. Cotton opened the door, walked down the hall, then quickly returned holding a small white pill. “Your mom was a nurse on a psych ward. There’s no way she sees you as ill. You’re her capable daughter and she’s seen the worst. Take this Ativan. Under your tongue.”

I would have taken anything. I put the pill under my tongue and felt the bitter graininess dissolve.

“Now breathe with me.” I took several deep breaths along with Dr. Cotton. The vise grip that had been on my body, that slowly grew from my armpits to my stomach, body, and brain, had been released.

That night, I entered my room without vomiting and firmly shut the door on my mom. After all of that time without control, I suddenly felt like I had a do-over. A new lease on life. I decided on some long-term goals.

1. Don’t date until you respect yourself and know your worth.

5. Spend more time with my mom.

7. You don’t owe anybody anything.

*Kelly Oxford is from Edmonton, Canada, and currently lives in Los Angeles, California, with her three children. She is the author of the* New York Times *best-seller* Everything Is Perfect When You’re a Liar. *You can find her avoiding her book and screenwriting on Twitter and Instagram (@kellyoxford).*

*From the book* WHEN YOU FIND OUT THE WORLD IS AGAINST YOU: And Other Funny Memories About Awful Moments, *by Kelly Oxford. Copyright © 2017 by Kelly Oxford. Reprinted by permission of Dey Street Books, an imprint of HarperCollins Publishers.*