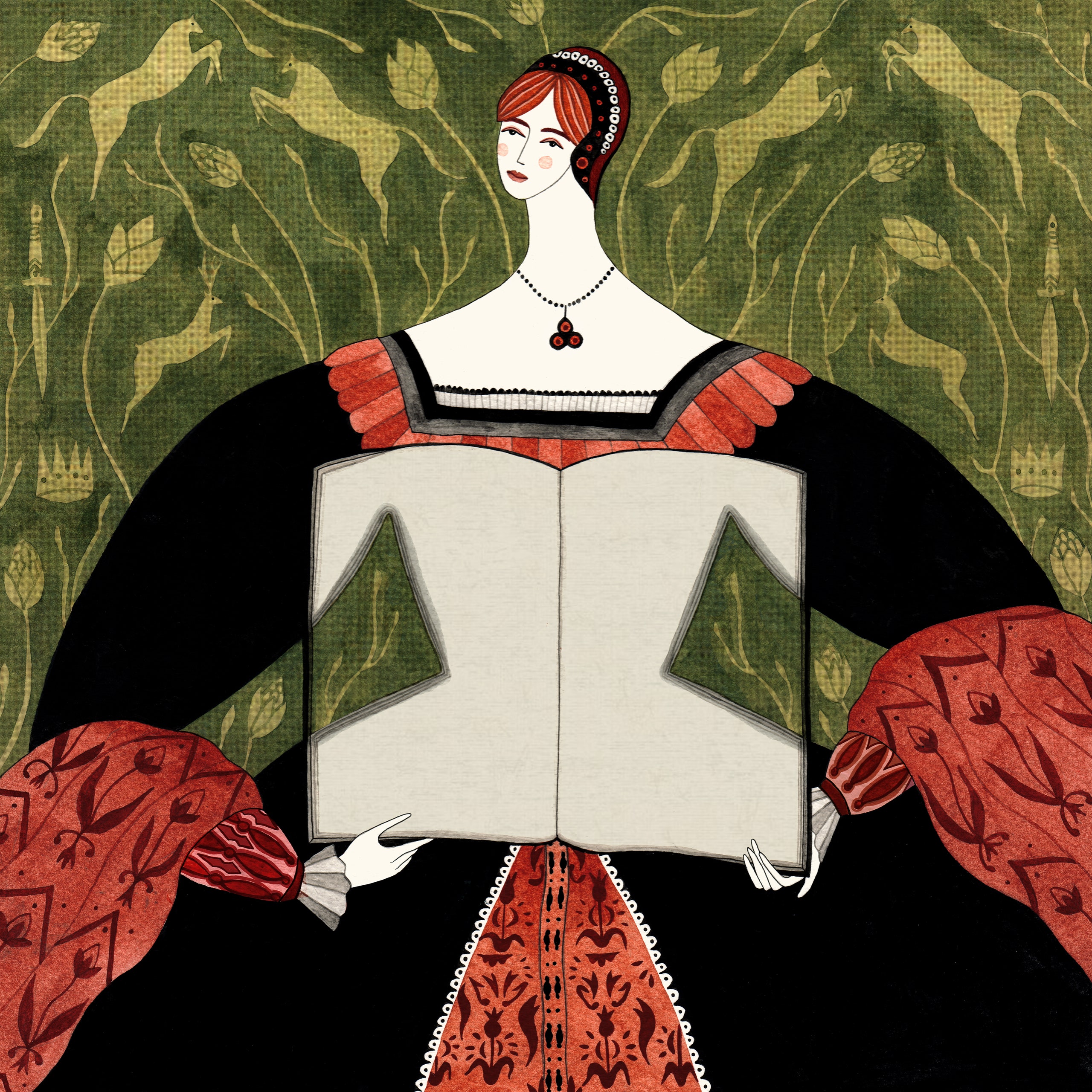 I’ve spent most of my working life looking into a void — staring into the gap where I would expect to find a well-researched biography of an interesting woman. Over and over again, I have come across a woman who has played a large part in a historical event and asked the question “Oh! Who’s this?” to be met with a resounding silence. The history of her father or brother or husband or son is usually there, sometimes in rich detail with vainglorious claims to greatness. The woman — absent.

Women are “hidden from history” for a number of different reasons, but the Grey family — the martyr Lady Jane Grey and her sisters, the subjects of my latest novel — are concealed in plain sight in three completely different ways.

Lady Jane Grey usurped the throne of England on the death of her cousin, the son of Henry VIII. Half of England was Protestant and feared a Roman Catholic monarch, and so Lady Jane’s supporters named her as queen in preference to the rightful Roman Catholic heir, Mary I.

The uprising collapsed within nine days. Mary marched on London to an ecstatic welcome, and Jane was imprisoned in the tower and disappeared from history into myth. This interesting, argumentative, loud-mouthed heretical teenager took the courageous choice to die for her faith — just as much a martyr as Sir Thomas More — and within days of her death, she was transformed from the real young woman she was into a Protestant icon.

Saint-making went into overdrive, as the very few references to her childhood were exaggerated or imagined into the hagiography of a saint. The process was crowned by a work by French painter Paul Delaroche, whose (1) has set an image of her in our minds, an image far from reality. Here is Jane Grey, not in the black Tudor gown trimmed with black jet that we knew she wore, but in the silvery white robe of the virgin sacrifice. Beside her is the lieutenant of the tower Sir John Brydges, guiding her toward the block. Behind her, collapsing as if to signify what women usually do under stress, are her useless ladies in waiting, and before her, posed so that all eyes are drawn to his codpiece, emphasized by a dagger, is the executioner. The tiny block where she is to die contrasts with the huge ax that will behead her. The girl herself is blindfolded and her imploring hands outstretched — she is both blind and lost.

But the truth is far more interesting. The real-life Jane walked to the scaffold and climbed the steps. She did this willingly, despite being offered a pardon, because she chose to die rather than to surrender her faith. She was escorted by the Roman Catholic priest that she had bested in his attempts to convert her. Well aware of its importance, she carried a prayer book, probably translated from the Latin by her mentor and teacher Kateryn Parr, Henry VIII’s final wife and the first woman to publish in English.

This was no blindfolded victim but a woman who knew her own mind, who had studied and given her faith to her own brand of religion and who wrote to her younger sister “Learn you to die,” to teach her the contempt for life that a true believer should feel. Her last words on the scaffold repeated her defiant claim that there was no such place as purgatory and that salvation came through faith — not by paid prayers in a chantry.

This Jane Grey — the young woman I see when I read the documents of her short life — is hidden by the image of the sacrificial victim. Painting women as saints and sinners is one of the ways of obscuring their complex reality.

Jane’s sister Katherine is also hidden, but she is concealed by Tudor propaganda. Katherine posed a major threat to Elizabeth I as a royal blood heir to the throne, untainted by any whisper of bastardy. She secretly married a Seymour (another royal connection) and gave birth to two half-Tudor boys — both potential heirs to the throne — while Elizabeth remained unmarried and childless.

On discovering Katherine’s marriage, Elizabeth bundled her into the Tower of London and then into house arrest, parting her forever from her husband and oldest son. She died in captivity and is barely recorded because none of the many conspiracies that swirled around her were successful. Elizabeth’s magnificent secret service suppressed the plots and silenced their discussion. I believe that they stole her papers so that almost everything that we know about Katherine was given in evidence against her at Elizabeth’s inquiry into her secret marriage. The record is designed to convict her, and she barely enters the loyal histories of the reign. Katherine’s history as sister to one queen, cousin to another, and granddaughter to another has come down to us as a footnote.

The youngest Grey girl, Mary, is hidden from history by two powerful eclipses. One is that her rebellion against Elizabeth was private, secret, and unsuccessful. She married a poor man, the queen’s sergeant porter, and there were no great relations to take up his cause. They were separated and imprisoned, and her husband died before he could reunite with his beloved wife. Without powerful friends, she was concealed by the queen’s enmity. Mary did not even enter the gossip sheets of the day, let alone the later histories.

And there is another reason for Mary’s absence from history: she was a little person, of less than four feet, and she was described — in the prejudiced language of the time — as “ugly.” Mary was neither tall enough nor important enough to make it into the record. Even worse (for me as a historian!), she does not appear in those few histories of little people that have so far been written. She is so slightly mentioned in the mainstream histories that historians of disability and of little people have not yet noticed her.

The three Grey girls read together are a fascinating story of a family out of favor in Elizabethan England, but they are also three powerful examples of how historians obscure and deny women’s place in history. Jane is too good to be true, Katherine is too private, and Mary is too little. I am glad that I have researched and written about all three, with equal interest, and done something toward bringing them out of the shadows.

*Philippa Gregory is a recognized authority on women’s history and the author of many best-selling novels, including* (2) *and, most recently,* (3).