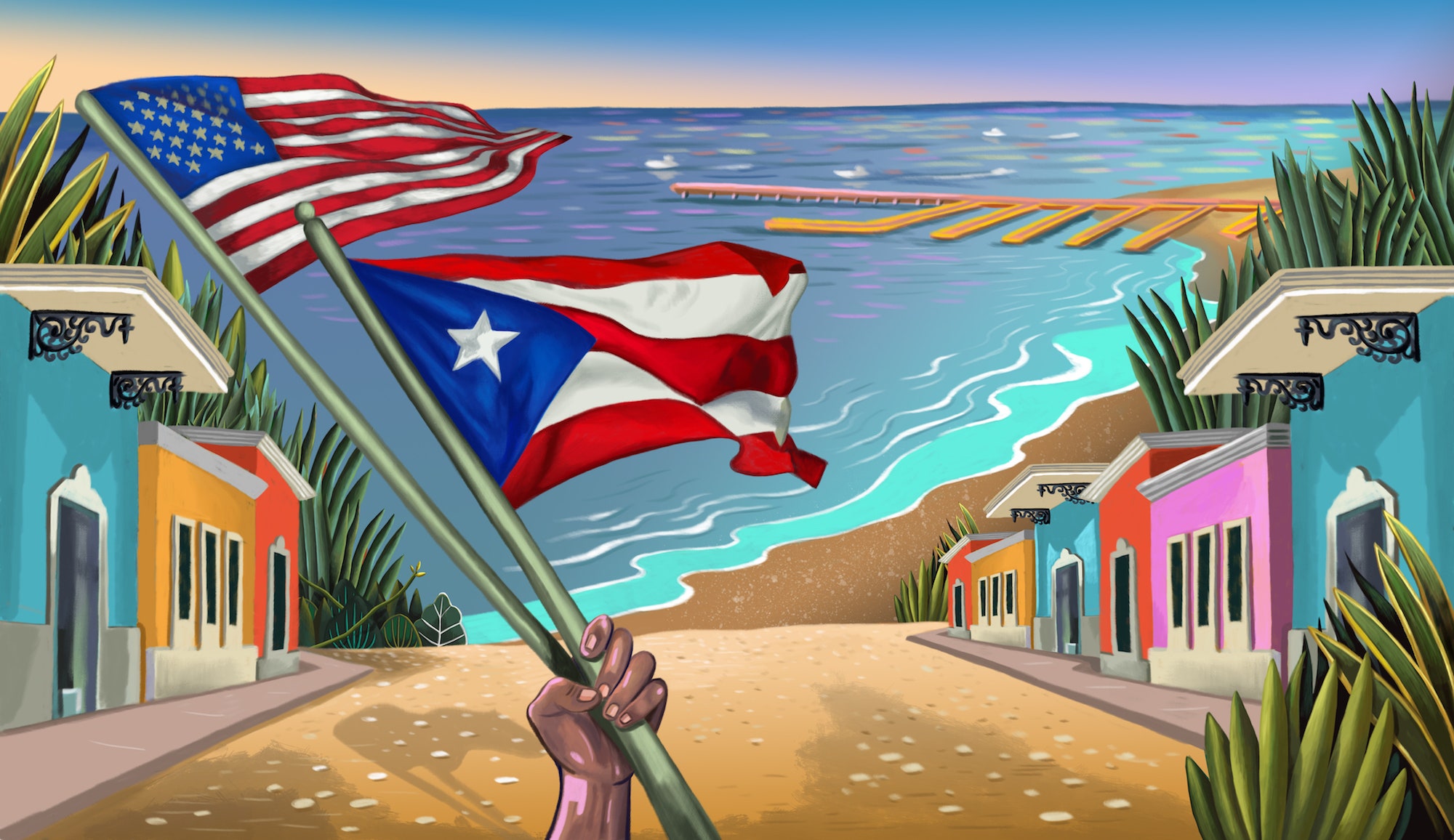 My father, God rest his soul, was a very proud Puerto Rican. My father was also a very proud American who served his country in two wars — World War II and the Korean War. He believed in the American Dream, the promise that if you worked hard, you could achieve your goals, and that regardless of race, color, or creed, you had a right to be at the table because of your citizenship.

When my father fell on hard times, he turned to the government, and they provided our family with housing for veterans. When he fell ill and had to be put on dialysis, he turned to the VA hospital and received the best of care. When he was buried, he received a soldier’s burial, and practically the entire population of his hometown, tiny Aguadilla, Puerto Rico, came out to pay their respects.

I’ve always felt proud to be his daughter. I felt extra-proud within my pain and sorrow that he received such a send-off from the country he loved and fought for.

As a little girl who was constantly taught to be proud and felt proud to be born a Puerto Rican as well as an American, I found it difficult to deal when others thought I was less-than because of my heritage.

Going to school and having to defend my accent, the curl of my hair, the brownness of my skin, made me question my father’s seemingly blind love for our great nation.

It hurt when the other kids would tell me that their parents said that Puerto Ricans were ignorant, uneducated, and lazy.

It angered me when my raised hand was ignored in class. I was furious when my teachers spoke down to me, explaining whatever lesson was at hand as if I had a learning disability.

I would become exhausted having to tell people I’d just met that I was not an immigrant but a United States citizen. I’d have to explain it over and over and over, even to this very day.

Still, I had my father’s voice in my head, and I’d puff out my chest and tell myself that I was just as smart and probably smarter than most, and, most important, I had as much of a right to stand on this soil as they did. They could kicks rocks for all I cared. Those thoughts were expressed in some ugly wars of words when I was a kid, and at times fists were thrown. But I was a Puerto Rican American, damn it, and you can’t speak to me or treat me that way!

It was hard at times to sustain that courage, that stance, but I held tight to my father’s unwavering belief in our country, which had become my own as well.

Yet all that I endured was small potatoes in comparison to what the island has experienced since becoming a territory of the United States in 1917. And Puerto Ricans’ fight against oppression and mistreatment has inspired me to stay in the fight as well.

Just one example of many injustices: From 1948 to 2001, the (4) for an average of (5). In 1998 alone, the Navy dropped 23,000 bombs. As a result, the cancer rate in Vieques is 27 percent higher than in the rest of Puerto Rico. Studies have shown that the groundwater in Vieques is contaminated by nitrates and explosives. Through protests, (6) finally forced the U.S. Navy to stop bombing.

There have been so many mass dumpings of toxic and deadly hazardous waste that today there are 23 Superfund sites in Puerto Rico — a whole lot for such a small island. As The New Republic put it, bluntly, ” (7).” Both the country’s land and its people are hurting deeply and have been for decades.

One day, as an adult, I sat with my father on the beautiful Crash Boat Beach in Aguadilla, and I asked him if he had ever encountered the same hurt that I had. He chuckled. “Of course,” he said. “Look at me. With this skin color, this hair, this accent. Of course. But it’s OK. Their stupidity and meanness is their right as Americans. And don’t think I don’t see the bad things too. The mainland should take care of the island better. Many of us fought for the United States, and it hurts, it hurts that we are treated differently and don’t get the same attention as the states get. But it’s OK. Not all Americans are that stupid. Many care. Many know what we did for them. And the American Dream still belongs to us.”

Right now Puerto Rico is suffering more than it has been already. Suffering beyond belief. (8), “There is horror in the streets.” Elderly and sick people have no medication or clean drinking water. (9). Almost (2). The scope of the devastation is beyond what is imaginable in a modern, developed country.

My father is probably turning in his grave right now. If he were alive, he’d be heartbroken by the delayed response from that man who was voted our president. It would’ve killed him to know that the same attention given to Texas and Florida has not been given to the people of Puerto Rico. While that man in the White House was busy tweeting nonsense about professional athletes and blaming Puerto Rico for its economic woes, Puerto Ricans continued to suffer.

We must not sit around with our anger waiting for this man to act in full. Many Puerto Rican Americans have never sat on the sidelines waiting for action. This time they need our help more than ever. __We can help Puerto Ricans right now by donating to (3), the (10), and the (1).__

Now, some of you might feel that nothing can be done about the plight of Puerto Rico after the devastating Hurricane Maria. But I will say to you that this is not true.

The Jones Act has been suffocating the people of Puerto Rico since it was enacted a century ago. This law has crippled the island and is greatly responsible for its $70 billion debt. The Jones Act stipulates that any foreign ship that comes to Puerto Rico has to cough up severe tariffs and fees. Who has to pay those fees? The people of the island. Puerto Ricans pay twice as much as Americans on the mainland for all goods that enter their ports.

Countless calls to remove or waive the Jones Act were too ignored … until today.

Through constant pressure from Puerto Ricans, along with elected officials like New York congresswoman Nydia Velázquez and Arizona senator John McCain, and the constant barrage of posts on social media, the president finally relented and waived the Jones Act after a century of protests!

Still, we must press on. Even if — or, shall I say, when — Puerto Rico rebuilds, that debt will still be there and will continue to grow if the Jones Act is not waived forever. The island will once again be crippled by this cruel law, regardless of whether it’s in another hurricane’s path.

I still believe in my father’s love for this great nation that I call home. I refuse to allow the lack of action from this administration to force me to let go of the American Dream. I still believe that many of my fellow Americans are good people.

My father was right. There are stupid and mean people in this world, but not all people are. Not all Americans see Puerto Ricans as less-than. Not all Americans feel that we can wait while others are dying and suffering. I hope — no, I *know* — that my father would be very proud to see so many of you standing up for and giving to the rebuilding of my beautiful island.

*Rosie Perez is an activist, producer, two-time-Emmy-nominated choreographer for* In Living *Color, and the director of* Yo Soy Boricua, Pa Que Tu Lo Sepas. *She is an Oscar- and Golden Globe–nominated actor for* Fearless. *Known for roles in such films as* Do the Right Thing, White Men Can’t Jump, *and* Pineapple Express, *she is costarring in NBC’s drama* Rise *in spring 2018 and in Sky One’s action-thriller series* Bounty Hunters *this fall.*