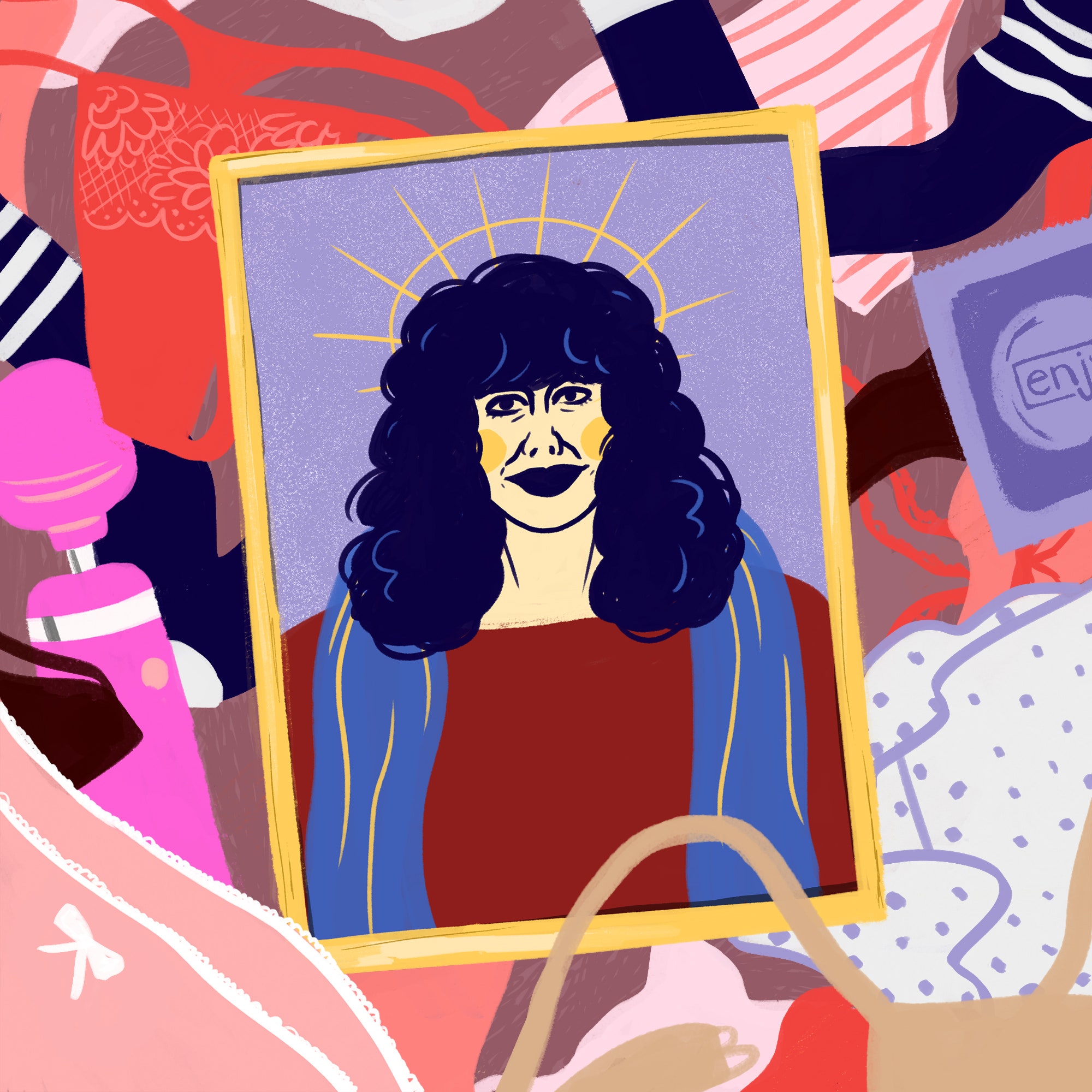 Being Facebook friends with someone you greatly admire but know only through their creative work is weird. You feel compelled to interact through a sense of false intimacy, like when you inadvertently say “Hi” to an actor on the street who you’ve vaguely misfiled as a neighbor. This is especially true if their work has made you privy to their inner workings for decades.

So when I learned on Facebook that Cynthia Heimel, a renegade feminist writer and one of my formative literary idols, passed away in February, it hit me like a shit-filled brick. As one of her sanctioned social-media voyeurs, I knew she was living in a California assisted-living facility and suffering from early-onset dementia — I’d read about it in numerous posts from her real friends, detailing visits and blow-by-blow updates on the status of her declining health. It took everything I had not to jump in to offer her or her family solace IRL, for Facebook was the only way we were very loosely acquainted.

It was a few years ago when she accepted my friend request, likely a *why-not* click for her and a thrill for me. Ask my friends from the ’80s and early ’90s, and they’ll testify in court they received their copies of (1), * (2)*, and (2) from me in acts of post-breakup morale-boosting and sisterly solidarity.

That same sisterly solidarity drove Heimel to write unapologetically, frankly, and rip-roaringly about sex, yet the act was a mere byproduct of her endgame: staunch feminism. She used the travails of her own life to systematically dismantle the status quo from deep within the female psyche. She contextualized the joy and pain of being female with a sharp and salty fuck-it-all turn of phrase in the form of a self-help tome that mocked the hell out of well-worn tropes while dispensing heaps of practical wisdom — wisdom we so badly needed back then.

For example, in *Sex Tips for Girls*, she advises: “‘Stop treating my nipples like chewing gum, you abysmal wart hog’ won’t get you nearly as far as ‘I simply crave you when you suck on my elbows in that gentle way of yours. And my nipples, which are very sensitive, would like to be treated in exactly the same way.’”

For the time, Heimel was a renegade, a deft wordsmith in leather pants who discussed the merits of muff-diving, Quaaludes, back rooms at clubs, and Manolos before Carrie Bradshaw even got her period (well, *Sex and the City* creator Candace Bushnell was probably just wrapping up college). It was quite enough for Cynthia to be Cynthia, revered for her mind and the words that poured out of it as her quotable coterie of devout gal pals, Rita, Cleo, and Lynn, served as both sounding boards and a Greek chorus.

As a sheltered, straight teen raised by Middle Eastern parents who taught me absolutely nothing about being a woman (other than that it was a painful exercise of self-sacrifice), *Sex Tips for Girls*, an amalgam of Cynthia’s *Village Voice* columns published in 1983, was a revelation. Those columns, “Problem Lady” and “Tongue in Chic,” positioned her as sort-of a Dear Abby for the sex, drugs, and rock-and-roll set, a medium later mimicked by Bushnell and in “Female Trouble,” the *New York Press* single-girl-about-town column by writer Amy Sohn. As for me, I finally had a big sister to boost my self-esteem when I blew a guy and when he blew me off.

“Her writing was both timely and timeless. She was tremendous in her ability to be candid about her own life and to grapple with the feelings on the page,” says (2), who edited and published some of Cynthia’s final essays in (2), an online feminist magazine.

“She was funny, raunchy, self-deprecating, and fiercely honest. Her books definitely influenced my books — especially the titles. Also, she was a nice Jewish girl and freelance writer in New York and LA, so I overidentified,” says (2), New School and NYU writing professor and author of numerous books, including the upcoming writer’s guide * (2)*. So many of us are guilty of overidentifying; Cynthia’s confessionals about fashion, women, men, children, dogs, friendship, feminism, and politics let you in on her in-jokes.

Marvelously, in rereading her books these past few months, I found everything she wrote about writing, motherhood, Republicans, middle age, and the myriad ways women are inherently screwed resonated as deeply with me as everything she’d written 30 years prior. *Get Your Tongue Out of My Mouth, I’m Kissing You Good-Bye!* is rife with #MeToo moments, like the time she interviewed the Who and Roger Daltrey asked if she’d give the band blow jobs. After sharing that anecdote, she went on to write: “There is the argument that sexual harassment happens primarily in blue-collar situations, where the men are so powerless and frustrated they need to find a scapegoat to make their miserable lives slightly better. But I work at a movie studio in Hollywood with a lot of educated, affluent people and, believe me, some very big-shot guys proposition, fondle and threaten young women on a daily basis. These young women have no power, they need their jobs to live, and they’re afraid to retaliate.” Again, this book came out 25 years ago.

The only time I met Heimel IRL was at a Boston bookstore, where she was promoting *Get Your Tongue Out of My Mouth, I’m Kissing You Good-Bye!* in the early ’90s. Though I was armed with a sample of my own work should we hit it off and she decide to take me under her dolman-sleeved wing, words abandoned me in her presence.

“This isn’t a schmooze,” I uttered, beyond awkwardly. “But your writing has deeply informed my life and work, so thank you!”

She responded tartly by signing my book “This isn’t a schmooze either.”

Most inspirational was Heimel’s rise — a story of true grit, without the benefit of J-school or writer’s retreats in exotic locales. A single mom supporting her son on welfare checks, she plodded along at secretarial jobs before working her way up to a column at the now-defunct *Soho Weekly News*, which eventually led to the aforementioned columns at the *Village Voice*. Eventually, she wrote for *Vogue* and *Playboy*, a lone feminist voice in publication completely dedicated to pleasing the erect male penis. She wrote a play, *A Girl’s Guide to Chaos*, which starred *That 70s Show* actress Debra Jo Rupp. Eventually, she moved to Los Angeles, where she became a scriptwriter for *Dear John*. Her final book, (2), was published in 2001.

(2), best-selling author of * (2)*, admits to fangirling Heimel-the-human as much as Heimel-the-writer. “I always wanted to be able to stride into a room in hot-pink tight pants and red high heels and a yellow shirt, which is what she was wearing when I met her,” Leavitt recalled during a chat with me on Facebook messenger. “She was the first famous person I ever met when I moved to New York. She was at a brunch thrown by a friend of mine and had just gotten a book deal for S*ex Tips for Girls*, which made me, a newly minted novelist, both deeply admiring of her … and a little freaked out. But Cynthia immediately came over to me and asked me all sorts of hilarious, sometimes personal questions, and I liked her instantly. Over the years, I’ve been following her career, devouring her work, and catching up with her life on Facebook, because there was something about Cynthia that made you *want* her to be happy. She was real.”

And, of course, she wanted to talk about sex. “She wanted to compare notes on the ex-lover we had in common. She wanted to know if I was sexually happy with my boyfriend and said, ‘Be sure you’re satisfied in bed, Anna. Don’t just write about it, y’know? Make sure you’re articulating what you need. I know it’s easy to say that on the page and forget to say it in the sack. Speak up, doll.’ She made me grow. I owe her so much. I miss her,” wrote March.