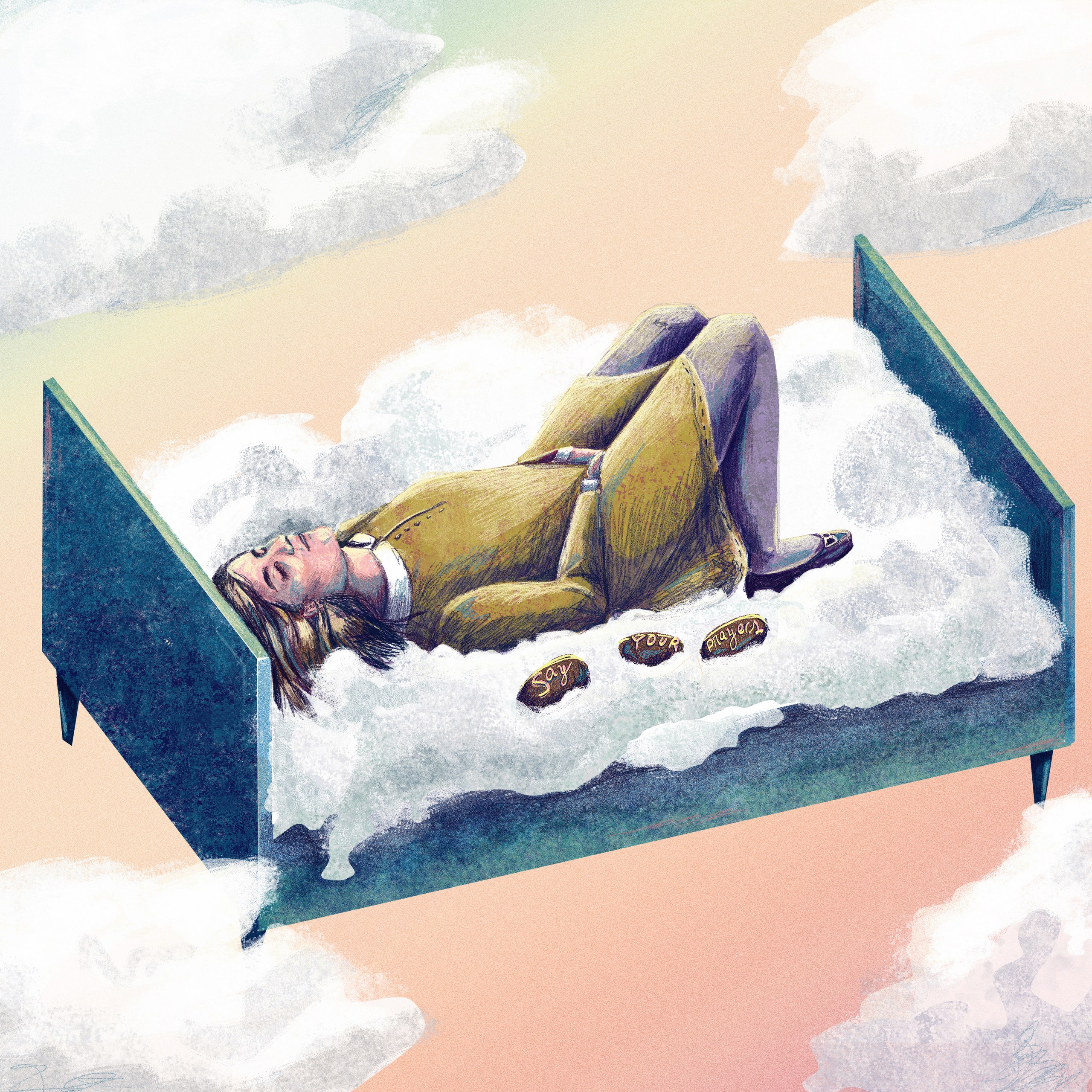 No one at Central Middle School wanted to be my friend. Once, a kid with breath so bad I swear he had a gum disease told the teacher he didn’t want to sit by me because *I* was gross, and she honored his request.

It was a bad time to be a seventh-grader. But it was a great time to be Mormon.

I was in the Plymouth 2nd Ward, and in the Plymouth 2nd Ward, people were nice to me. Tyler Petersen, the hottest guy from another middle school, whose voice had gone deeper faster than anyone at Central Middle School, and who wore soccer jerseys and always smelled like boy, knew my name and sat by me and passed notes with me during movies about eternal families. Ashley Seeley, who wore winged eyeliner and had won a statewide dance competition and knew how to do French braids so tiny you could barely see them, had pictures of me in frames in her room! In the pictures, we looked so happy that you might think we were the photo that came with the frame.

Church was a dream happening in real life, and it happened for three hours every Sunday and for two hours on Wednesday nights. I was hooked.

I prayed and prayed. I kept small rocks under my bedspread so that if I ever forgot to pray before going to sleep, I’d lie down on the rocks and remember. There were three rocks, each about the size of an egg, and I’d written SAY YOUR PRAYERS on them with puff paint. Before I went to sleep at night, I moved the rocks to the floor, so that I’d step on them when I got out of bed in the morning and remember to pray again.

Putting rocks in your bed might seem like a bit much. But Joseph Smith, the church’s founder and first prophet, once said that “a religion that does not require the sacrifice of all things never has the power sufficient to produce the faith necessary unto life and salvation.” It wasn’t catchy, but I thought it was the most exciting quote in the world. And fourteen was an especially exciting age, because it’s the age Joseph Smith was when he founded the church. Also, the rocks weren’t sharp or anything.

Every time I impressed the other members of the Plymouth 2nd Ward with a memorized scripture or quote, Tyler would whisper, “That was awesome,” and his mouth would be inches from my ear. And all the girls wrote me notes about how they loved my testimony, and I slipped them into my scriptures. I memorized the notes so I could think about them when the gym teacher asked me to sit out this round because I was so bad at softball I was ruining it for the rest of the class.

“You’re embarrassing yourself in front of everyone you know,” my gym teacher said.

“You’re an inspiration and a true friend,” Becky’s note said.

“You scored a run for the wrong team, twice,” my gym teacher said.

“You have such a big testimony in such a small body,” Emily’s note said. “You’re a spiritual powerhouse.”

I didn’t beat myself up too much over my lack of softball skills. Central Middle School didn’t matter. The only class with power sufficient to produce the faith necessary unto life and salvation was Sunday school.

Our Sunday-school teacher was Sister Campbell, a cheerful woman in her late 30s with the biggest bangs I’d ever seen. She loved a good cardigan and a clean joke.

At the beginning of one Sunday school in the middle of seventh grade, she gathered us around and waited until we were completely silent. There were five of us in Mia Maids, the name for girls who are fourteen to fifteen years old.

“Girls, girls,” she said, her voice quieter and quieter.

I waited for her to repeat whatever that word had been, but instead of clarifying or explaining, she let out a weird cough.

Then she coughed more.

“I won’t say that word again” was her unfortunate next line.

Starting an hour-long lesson with a whispered word didn’t bode well, but I had faith things would pick up. Whatever she’d just said, maceration, it was probably just another word for eternal life, and if I listened closely it would all start to make sense.

The room was quieter than seemed possible. Half the girls were leaning in and hanging on every word, and the rest were leaning away in discomfort.

I raised my eyebrows in a subtle way that I hoped suggested “Want to say it just one more time? Or give a definition?”

> I never talked to anyone about it, but the feeling was complicated and
> strong and definitely spiritual.

“You won’t hear me say it again,” she repeated. “It doesn’t belong in this room. But it’s everywhere — I even saw an episode all about it on Oprah.”

“I’ll tell you about the episode.” She was looking right at me now, which I didn’t like especially. “It was an episode all about what Oprah calls ‘flying solo.'”

I needed to ask what the word was again, in the most casual way possible. Maybe it was better to ask how to spell it?

But there was no time. Sister Campbell had a lot more to say about mastication. People say it is natural, but it is not.

Yes, it will make you sick.

If it happens once, it will never go away.

I kept adding to my notes, writing very small at this point, so no one would glance over and realize how clueless I was about whatever this lesson was.

Sister Campbell started to cry. It wasn’t the kind of fake-crying teachers did to get the room’s attention when you were acting up. These were real tears. She wiped her eyes with a Kleenex that could have been in her pocket for hours or years.

“You’re all beautiful daughters of God,” she said, choking. “Each of you is so beautiful inside and out, and I think about you during the week and feel so blessed to be your teacher.”

“And the topic of this lesson — DO NOT EVER DO IT. If you feel like doing it, or if you’ve been tempted, come talk to me. We can help you find your way back.”

Find your way back from where? What was this thing? For the first and last time during the hour, I started to worry. What if it were something I was doing all the time, and I just didn’t know what it was called?

I probably wasn’t, I reasoned. If it were bad enough to make an adult this upset, I would know.

I hated myself for not asking what this lesson was about the very first second I had a chance. Sister Campbell looked up at the ceiling to hold back tears as she continued to address the room.

I tried to think about other things.

Our teachers always recommended tips for things to do with your brain if you found yourself having bad thoughts. The most popular one was to think of the lyrics of “I Am a Child of God,” a children’s song that was a real crowd-pleaser.

Thinking of songs was nice and widely encouraged, but everyone was supposed to come up with their own tricks too. During sad or boring times at school, I’d put my hands in fists so that my fingernails pushed into my palms. It was a great feeling to focus on and always distracted me.

At home in private — this one was a little weirder but just as good — I’d take my hand and run it slowly over where my legs met. Slowly then fast. I never talked to anyone about it, but the feeling was complicated and strong and definitely spiritual, and it worked especially well when I imagined the faceless woman on the Young Woman in Excellence medallion while I worked. To be honest, the feeling was the only thing I really had a testimony of. You can’t have a testimony of memorized scripture verses, but this feeling, this good, warm, fast, colorful distraction feeling I’d discovered, it was something otherworldly. It was the kind of emotion I was looking for in everything and hardly ever found.

When our class was excused, none of us stayed around to talk. I roamed the halls alone until my parents had rounded up all of us, and we drove home.

Upstairs in my bedroom, I taped the song lyrics to my wall between a business-card-sized photo of Jesus and a postcard of the faceless Young Woman in Excellence. I sat on the floor and looked up at all three.

Still in my Sunday dress, my modest tights, and my shoes that got a little smaller every week, I put my hands on my knees, and I sat and I listened closely for some sort of spiritual explanation of what it all meant. I waited for a flash of light, or a whisper, or anything at all.

That afternoon in my bedroom, anything seemed possible and likely as long as I was patient enough.

*Brooke Barker is the author and illustrator of the* New York Times *best-selling book* Sad Animal Facts. *You can find her on her Instagram account, which is also called (1).*