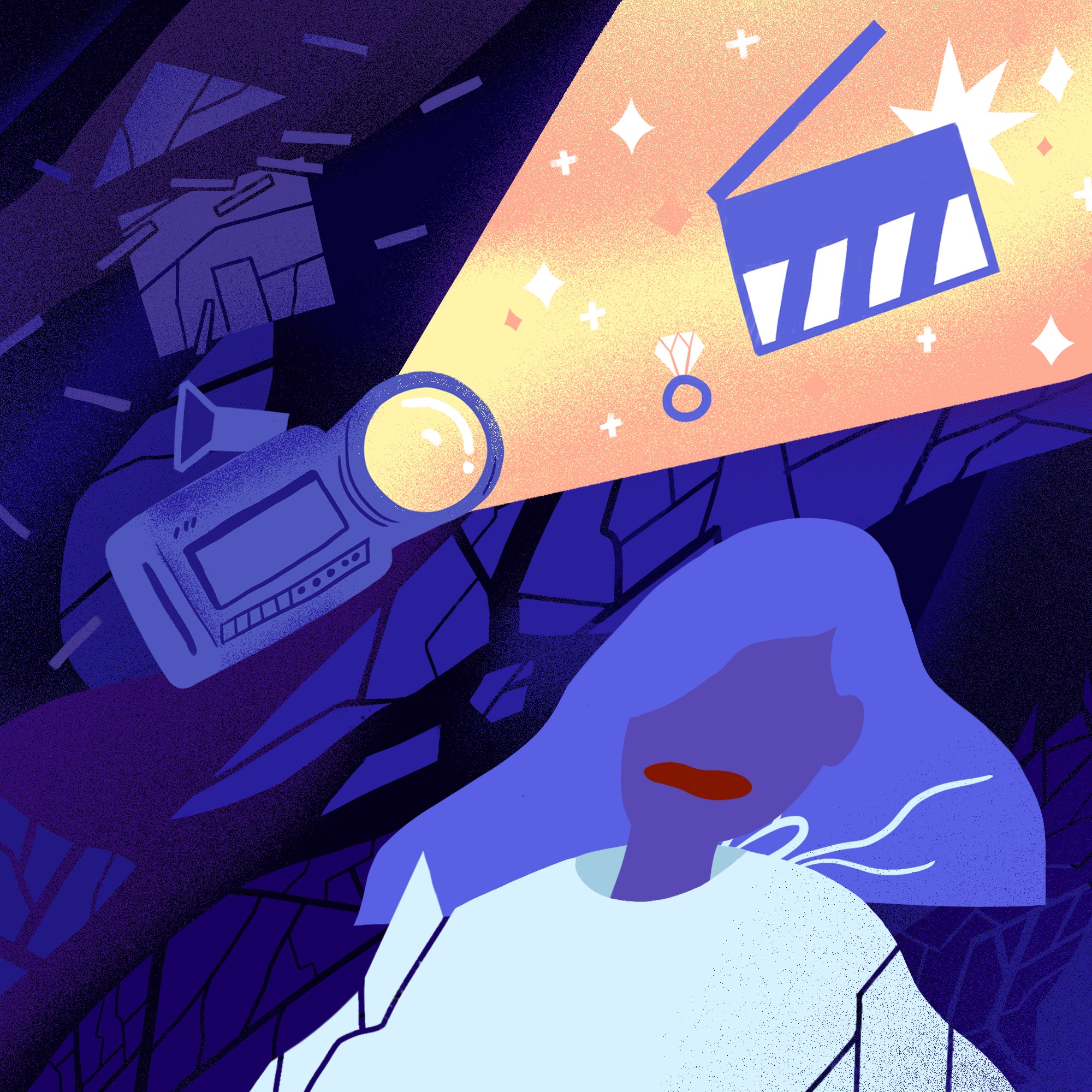 Two thousand eleven was a year of nonstop high points in my life. My creative dreams came true when I filmed a little indie movie I co-wrote about friendship and phone sex called *For a Good Time, Call …* My romantic dreams came true when I married the love of my life at a beautiful wedding surrounded by our friends and family. And then my professional dreams exploded with magical confetti when we sold our tiny, candy-colored, female-driven comedy to Focus Features after it premiered at the Sundance Film Festival. So many moments I had dreamed about for years were actually happening.

It was the happiest time of my life!

Except that it also wasn’t. It was actually kind of the worst.

This was around five years into my mom’s diagnosis of Alzheimer’s. Up until that point, her disease had been in the early stages. Her symptoms manifested in the repeated stories she told, occasionally slurred or confused speech, and a serious attachment to my dad. But Alzheimer’s is like a train that can’t be stopped once it leaves the station. And although these early days were really scary, they were nothing compared to what happened as the disease barreled through my mom’s once vibrant and beautiful mind.

She lived in Florida, and I was all the way across the country in Los Angeles. When she was first diagnosed, she told me I wasn’t allowed to move back to Florida to be with her. She wanted me to live my life — one that she had worked so hard to support. She was selfless like that. It was more important to her that I pursue my dreams, my relationship, and my own life as an independent woman than to have me close while she was disappearing piece by piece.

I visited Florida as often as I could, and, in the first few years of her disease, she and my dad visited me in LA. In 2007, they came out for the premiere of *Knocked Up* — a huge celebration for my then-boyfriend, as it was his first starring role in a movie. We had a barbecue for friends and family at our house the day before the premiere, and while it was a delicious taco, rib, mac-’n’-cheese extravaganza, what I remember is having to show my mom where the silverware drawer was a dozen times. She also kept adding turkey to the vegetarian chili and I had to keep taking it out. I remember my sister-in-law asking if my mom was OK, and I remember telling her “she’s not.”

As the years went by, she got worse. When we were making *For A Good Time, Call…*, I wanted my parents to come to Los Angeles to visit the set of the movie I had worked so hard to put together. But my mom had started wandering off and having bathroom issues — this reality was enough to keep them home. It devastated my movie-buff dad (who had a closet full of 500-plus VHS tapes of all the greatest hits) that he couldn’t visit the set of his daughter’s first film, which his son was also executive producing. And it devastated me that I couldn’t show my mom that I was actually doing what she wanted — I was living my life. But there was no time to be sad about it; there was a pink phone ringing and I had to answer it with a smile because the cameras were rolling and I was literally living my dream! Or so I told myself.

The night before my wedding, at the rehearsal dinner, my mom told me, “I just want to go home. I don’t want to be here.” I knew it was because she didn’t know where she was. The pain of knowing that she didn’t know she was at my wedding was like that Alzheimer’s train plowing right through my heart.

I brought my new husband and his parents to Florida for Thanksgiving that year — we went to Disney World. I showed them where I was a cheerleader for my awesome high-school football team (go Dreadnaughts!) and made them eat a Publix sub sandwich, my favorite hometown food. We also witnessed my mom pacing the house endlessly, not making much sense with her words, and mistaking the floor for a toilet. It was not quite the way I envisioned introducing my in-laws to the home I grew up in.

Although things were finally happening in my career in a way I had dreamed about for years — I was going on auditions, having meetings with producers about writing exciting scripts, and traveling around as my little-movie-that-could was released in actual theaters — my outlook on life was growing darker and darker with each passing day. Every person I saw run a stop sign was responsible for ruining the world. If I heard someone say something I didn’t agree with, it meant everyone was stupid and there was no hope for humanity. And most of all, I was convinced that the whole concept of life was just utter shit if this is what happened to the greatest woman I’ve ever known, a woman who had lived her life giving so much to so many.

Once my stress resulted in silver-dollar-size bacne, three (minor) car accidents in four months, and general life-rage that was bordering on getting out of control, it seemed like the right time to talk to a professional.

My new therapist listened, she gave me tissues, she told me it was OK to feel all the pain I was feeling. She let me go on and on to her about how life was just so unfair. And she didn’t even make me feel ungrateful for discounting all the legitimately amazing stuff in my life, because the agony I was in needed attention.

But eventually, she started to suggest that perhaps not *everything* was totally awful. Maybe there were a few good things in my life. Like, maybe my wonderful husband? Or my generous and awesome friends? Or even my career that felt like it was finally happening?

“Nope!” I insisted. “None of those things matter because everyone is dumb and there’s no point to any of this, and it’s all just a cycle of sadness and devastation, yadda, yadda, negative, negative, fuck, ahhhh! …”

As it always does, time passed. My parents moved to Los Angeles, and I got a front-row seat to my mom’s decline. She was now fully incontinent, had stopped walking, and had essentially stopped communicating. Having her close felt good, but seeing her become a shell of who she used to be was draining. When I wasn’t at her house, life continued as it normally did for me — spending my days alone, writing about and ruminating on my anger, spending my evenings and weekends laughing with friends over good food, and occasionally attending premieres for my (very fortunate and hard-working) husband’s movies. My therapist kept insisting that “in life, there can be good and there can be bad, and, in fact, they can coexist.” Even though I was living it, I refused to believe her.

Until eventually, I did.

In the fall of 2012, I started writing a screenplay about a woman who is left at the altar and ends up going on what would have been her honeymoon cruise with her estranged father. Obviously, this story has nothing to do with my real life (you just read about my wedding and my awesome dad), but I was drawn to the idea of a female character whose life doesn’t go the way she wants it to but who finds a way through the pain. It took me almost two years to finish a full draft, in part because I was still finding my own way through the pain. But when I did finish, I realized had written a story about a woman whose life has been seriously rocked, and, through her journey to get to the other side of her sadness, she experiences laughter, friendship, and adventure, as well as heartache, anger, and struggle for acceptance. Just like me.

I recently started thinking of my life as a dramedy. It’s full of jokes about penises, people comically falling, and moments of pure love and joy. It’s also full of pain, loss, and real anger. Ups and downs, highs and lows. But somewhere along the way, through my work in therapy, through talking about what I had been going through with my mom, through creating (1) through writing, through *living through my pain*, I began to let in some of the good with the bad. To understand that it’s OK to feel both sad when I leave my mom’s house *and* excited about the dinner with friends I’m going to that night. That perhaps the *point* of life is to appreciate both the happy moments and the sad moments *together*. That they give each other meaning. That we *have* to have both, that we *all* have both, that experiencing both is actually OK. And if we need to spend a little time in the sad lane, the happy lane really can still run alongside it, if we allow it to.

*Lauren Miller Rogen is a filmmaker and Alzheimer’s advocate living in Los Angeles. Her directorial debut,* (2)*, which she also wrote and produced, launches globally on Netflix on Friday, August 3.*