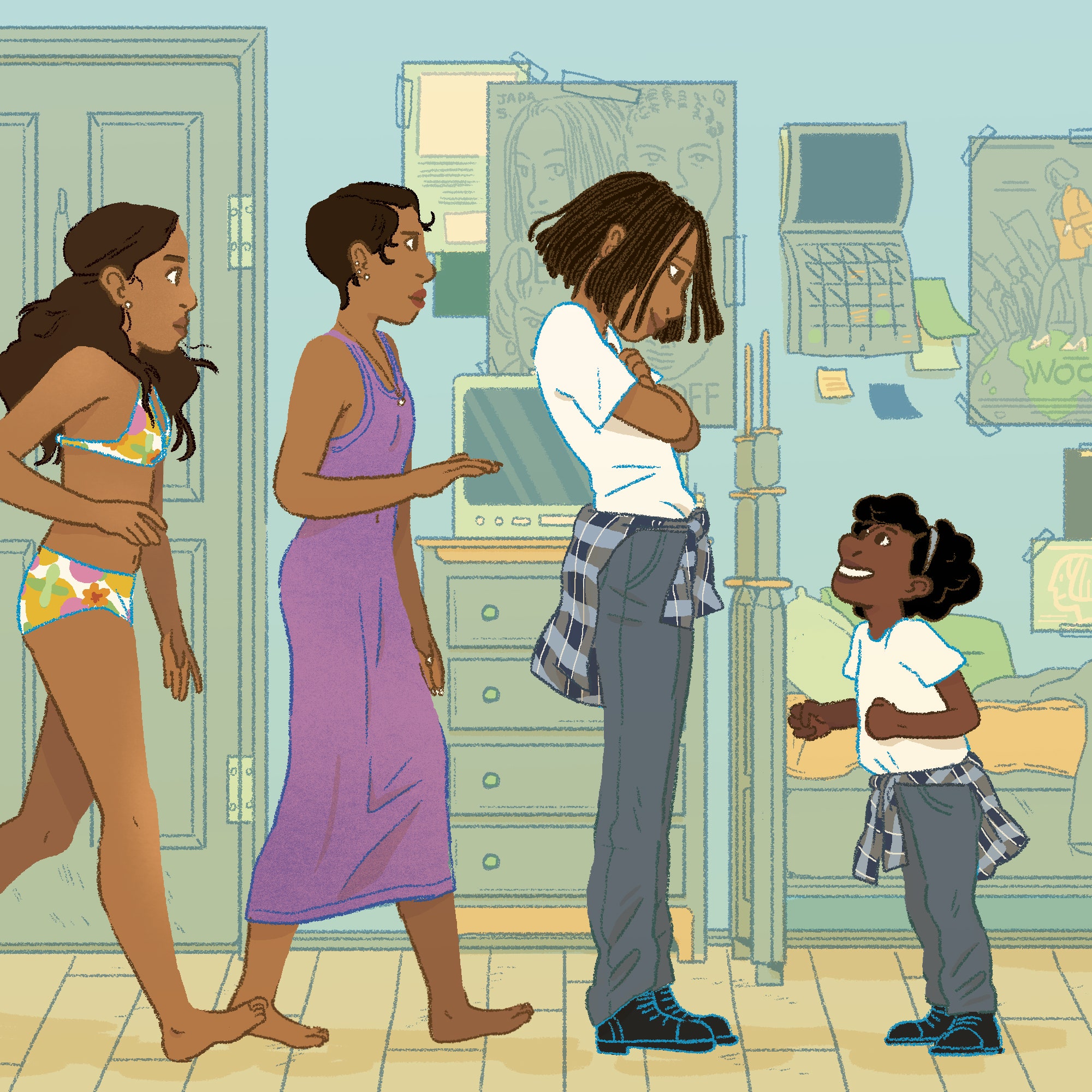 In the late ’90s, as a preteen and the only girl in my family, I spent the bulk of my time hanging out in my mom’s hair salon in Michigan, where my favorite place to sit was in one of the green dryer chairs while I eavesdropped on what my mom called “grown folks business.” Most of the clients were middle-class black women who used their time in the chair to let loose. I remember listening on as a woman passionately detailed the troubles she was having in her marriage while getting her hair shampooed. Next to them, a hair stylist sewed extensions into a woman’s cornrows as she recalled the reaction she got earlier that day when she showed up to her office wearing an afro instead of her usual weave. Black magazines littered the salon, and I remember fetching them for my mom to help her clients decide on their hairstyles. In the salon, the styles of popular black actresses were upheld as the standard of beauty. The hair color of Mary, the braids of Brandy, Aaliyah’s over-the-eye swoop, and then there was Jada Pinkett Smith.

Jada’s blonde (sometimes red, sometimes brown, sometimes platinum), slicked-down pixie haircut was the epitome of style. Even my mom transformed her long, dark, wavy hair into a short, bright red ’do to be identical to hers. “How short do you want it? Like Jada? Bran, get me that *Essence* with Jada on the cover,” I remember my mom asking at the salon. It was around that time that my introduction and, shortly after, obsession with Jada began.

My mother worked alongside her beauty-school bestie, Jamie, who was also my godmother. She had pale white skin and natural red hair, and could handle a hot comb like a Southern black auntie. My most memorable summers were spent at her house. On the last day of elementary school, I’d go home and pack a bag of “play clothes” and climb into my mom’s old-school, steak-sauce-hued Chevy to head to Jamie’s crowded house, full with five kids of her own. It was here I had my first onscreen encounter with Jada Pinkett Smith.

One rainy summer day, stuck inside watching TV, was the first time I saw *Inkwell*, a coming-of-age drama where Jada plays a snooty teenager from an affluent black community on summer vacation in Martha’s Vineyard. In the film, Jada’s character, Lauren Kelly, was the typical mean girl: she broke hearts, she didn’t hang out with lames, and, most importantly, she didn’t hold her tongue. But, to ten-year-old me, she had a grace and style that made cruel look cool. Her thick, long hair freshly pressed, yet slightly undone; brightly colored printed bikinis; halter tops, breezy summer minidresses.

It was the first time I understood what having a sense of style meant, and I drastically wanted to change mine. My socks never matched, I wore sneakers until they broke apart, and most of the time my hair was in two raggedy pigtails. Polar opposite from Jada. The first big change was my hair. Even though I grew up in a hair salon, I never had the motivation to keep consistent hair appointments. However, soon after the summer I saw *Inkwell*, I listened my mother’s advice and wrapped my hair every night, so that my Just for Me perm wouldn’t sweat out, making it easier to mimic Jada’s hairdo.

My second encounter with Jada was with my best friend Abby. One summer night, we had a sleepover with the other girls from the neighborhood and watched *Set It Off*, where Jada played Stony. The film captivated us. There we were, four young girls in the middle of our “girl power” stage, eating junk food in Abby’s attic, watching four badass women rob banks in Los Angeles. When the movie ended we dressed up as the bandits, who, in our eyes, were black superheroines, fighting for their loved ones and opportunities. Abby was an only child and had what seemed like a never-ending closet full of clothes. I loved Abby, but I also loved Jada so much that I threatened to leave the party if I didn’t get to play Stony. The girls believed me, and gave in to my demands. I put on a pair of Abby’s straight-leg jeans and black patent-leather boots and tied her dad’s flannel around my waist, impersonating Stony’s signature look. We posed on Abby’s dad’s Cadillac, mimicking a scene from the movie.

Driving home with my mom at the end of that summer, I learned the best secret of them all: in our at-home movie collection was a plethora of Jada films that I had glossed over before she became my newly discovered idol. As soon as we walked into the front door, I scoured our VHS collection and dived into iconic films like *Jason’s Lyric, The Nutty Professor, A Low Down Dirty Shame,* and *Bamboozled.* I became obsessed with everything about Peaches in *A Low Down Dirty Shame*. She wore the outfits of my dreams: a red leather jumpsuit with a matching baseball cap, and baggy sweatpants with a fitted tank top. I would rewind Peaches’ monologues, learn the lines, and practice being her in the mirror.

After a summer spent devouring her films, that fall, as my yearly routine began, Jada’s style inspired the most important decision of my youth: the first-day-of-school outfit. She symbolized who I wanted to portray in the school hallways. The perfect balance of tomboy and diva, sophisticated and sassy, like pairing combat boots with a sundress, or wearing a baseball hat over a freshly done press.

On the first day of fifth grade I wore a burgundy tank top over a white one, à la Peaches in *A Low Down Dirty Shame*. I stole a line from Peaches — “Everybody chill, just relax. Don’t make me get rowdy, it is not a pretty sight” — and pretended that I made it up. Next thing I knew, I had the girls in my clique repeating it daily. On the first day of sixth grade, I rocked a Canadian suit like Lyric in *Jason’s Lyric*. I had my own signature hairstyle, too: a swoop ponytail. It wasn’t a copy of a specific Jada Pinkett Smith hairdo, it was my own thing. But it was inherently inspired by her. In the same way that I had overheard women describe Jada’s haircuts to my mom in the salon, I wanted to be seen as the girl who wore her hairstyle so perfectly that other girls in my class wanted to swagger jack. Eventually, my classmates noticed my signature look, and I got used to hearing “I was trying to copy you today” when a friend showed up to school rocking her version of the swoop ponytail.

But most of my classmates had no idea who I was mimicking, as they probably hadn’t seen any of the rated-R movies Jada starred in. The truth was, I was too shy to go out for a role in a play or dance on the cheerleading squad, so being able to copy Jada with my outfits each year was the most outgoing I felt as a middle-school girl. I wanted people to look at me the same way that I looked at Jada, as a confident girl who owns her style. By high school, though, my Jada phase was over, and I found my own sense of style. Freshman year I was befriended by a crew of seniors, and my style matured from sneakers and T-shirts to heeled boots and snug sweaters. I traded my signature swoop ponytail for a bone-straight press often, and skipped school to get my acrylic nails filled.

These days, my signature hairdo is a copper-toned afro. My signature outfit depends on my mood. Yet to this day, when I take a compliment, instead of saying “Thank you,” I’ll strike a pose and respond with an iconic Peaches quote: “So you like?”

*Brandyn Janese is a writer and performer. She lives in the Bronx*.