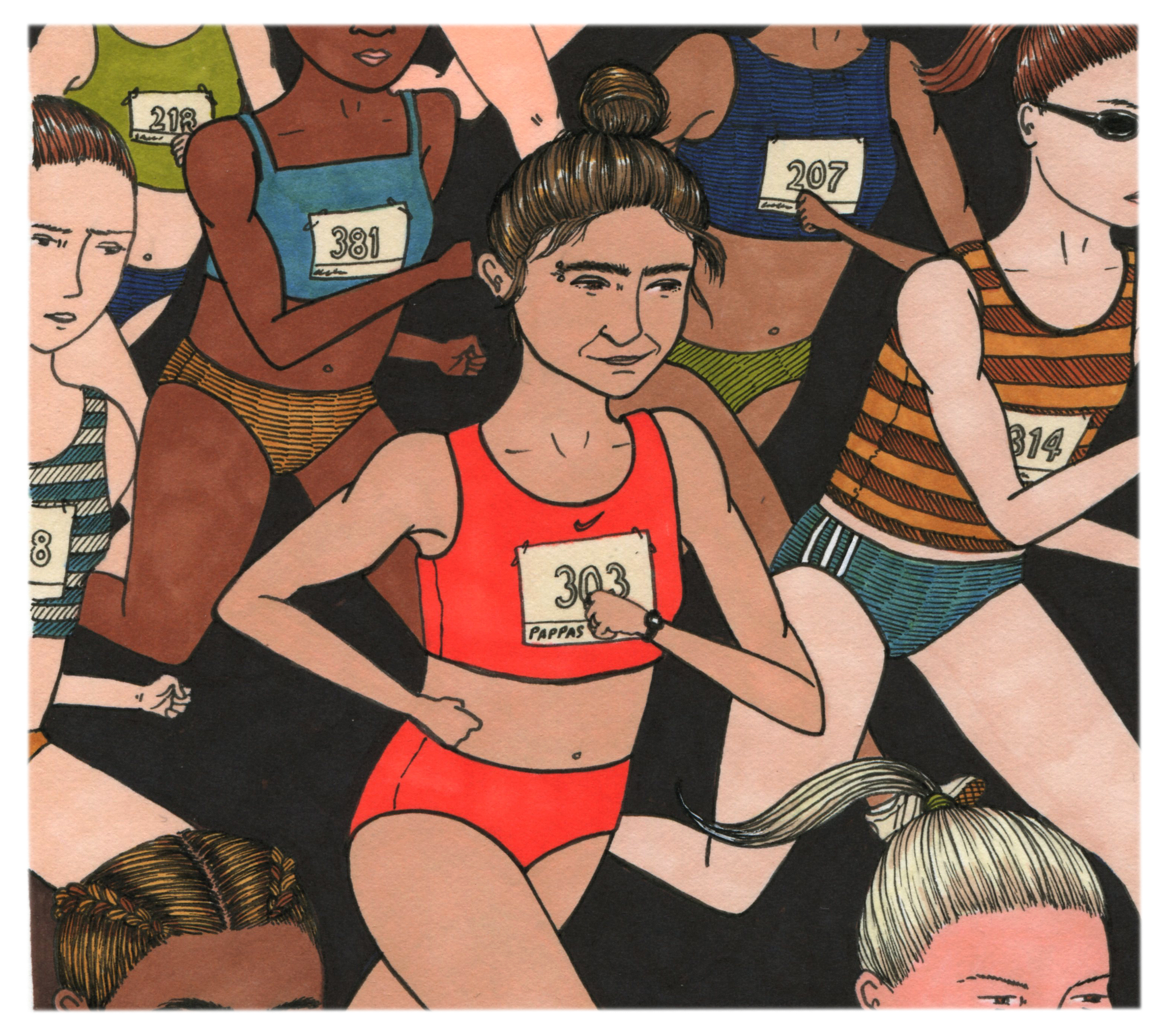 Last week I ran the 10,000 meter race at the 2016 Olympic Games in Rio. The 10k is the longest race on the track, a combination of endurance running and grueling speed — it’s a test of pain tolerance and mental toughness just as much as of athletic ability. To qualify for the Olympics in the 10k, it is important to become a champion of pain.

Some pain happens like butter melting on toast, a slow thing over time. Or it is quick, like butter hitting a very hot pan. Either way, at this stage in my career as a distance runner, I generally understand that I can exert myself to my absolute physical limit and I will (probably) not die. The pain I feel during a tough workout or competitive race is like an expected guest at my dinner party; I know it will be there and I am fully prepared to open the door.

When I was younger, though, I _did_ think that running might actually kill me. I had the desire to be an Olympian but I could not fathom or agree to the pain required to get there.

As a middle- and high-school athlete, I dreaded every single race. Not because I was anxious about finishing well, but because I was terrified of the pain I would soon endure. I remember crafting a very specific daydream that I entertained before every race in which an alien spaceship landed in the middle of the track. Nobody would blame me for leaving the race and going home after such an extraterrestrial disruption. But no matter how much I fantasized, the Martians never landed, and the starting gun always fired.

I have never been able to fully recall the exact sensations of pain I felt during those races, but I do remember certain details — gestures of pain. Salt-sweat residue chafed between my legs, my vision blurred with sunscreen, and I always became unpleasantly aware of the weight of my thick eyebrows, furrowed so deeply they fused with my poorly mascara-ed eyelashes, which looked rather like charred stalks of asparagus that had been forgotten in the oven. I ran as hard as I could at the whim of these cruel intruders. My body felt like an ant farm filled with swarming creatures excavating serpentine burrows, visible to everyone through my transparent frame.

> I have never been able to fully recall the exact sensations of pain I felt during those races, but I do remember certain details — gestures of pain.​

Despite days of anxious anticipation, the pain still shocked me every time it inevitably arrived. I would scold myself for not being grateful enough for all the other moments in my life spent _not in the pain of a race_ — for every leisurely second watching cartoons, eating fried calamari, and doing anything besides running, which hurts very much.

After every single youth race ended, even when I won, my joy at finishing the race was mixed with trauma over the pain I had just experienced. I would stomp from the finish line toward my dad, who I remember as having a camera for a nose, and report to him that seriously, this race _could have killed me,_ and I simply could not go through this again. My dad, who knew running probably wouldn’t kill me, replied from behind the still-snapping camera with a proud grin that hung just below the lens. “It’s OK, Lex.”

When I started to race at the university level as a freshman at Dartmouth, it became clear that I needed to develop a technique to manage my negative and fearful thoughts around pain. I could no longer afford to spend days leading up to races and workouts steeped in anxiety and dread; negative thinking drains energy. Pain and I had to come to a new understanding.

> Pain and I had to come to a new understanding.​

It reminded me of the time I got in a fight with a girl in middle school and our teacher quarantined us in a room called “the pod” for an hour to figure things out. Just us two eleven-year-olds. My adversary and I spent a good 45 minutes in silence, unibrows glaring at each other. In the end we agreed that we didn’t want or need to be friends, but for both our sakes we would be civil.

I resolved to be similarly civil with pain. Before my races and big workouts, I consciously shifted my mental energy from dreading upcoming discomfort to simply recognizing that pain will always appear in slight variations of itself, and I should try to greet it politely.

I apply this approach to non-running pain as well, when I am simply sad. And I do get sad sometimes, like when I am last in a race, or for reasons unrelated to running, like when I cut off a phone call with my father too quickly, or for other reasons I don’t always know or fully understand. When I am sad, even though it’s a quieter pain than in a race, I still feel it physically like a Jenga-block push to the heart. As when I am running, I try to stay calm and be mentally OK with sadness, anger, or any emotion I know is normal every once in a while.

Armed with an upgraded mental outlook on pain, I developed tools to help manage the hurt once it inevitably arrived during a college race or workout.

Visualization is one of these tools. Based on the distance or type of course, I can anticipate which parts of the race will be the most grueling. In the days leading up to a big event — while jogging, cutting my nails, or scrambling eggs — I visualize an Alexi-inside-my-head approaching a specific painful moment along the course and pushing through the rough patch with composure, strength, and even beauty. When I actually face the challenge in the race, my decision to press on is already made — fear and doubt are no longer factors.

> When I actually face the challenge in the race, my decision to press on is already made — fear and doubt are no longer factors.​

I also developed physical triggers, _playable actions,_ to help my mind overcome the anxiety associated with the onset of pain. For example: “When the pain hits after the third mile, remember to shake your arms out, drop your shoulders, and force yourself to smile.” Or: “Before the final lap, take three quick steps and accelerate.” If I am sad, instead of telling myself to feel happy, I give myself a playable action: “Lift your arms up, let out a short yell, drink sparkly water, and read a page from your Sarah Ruhl book.”

By converting a mental struggle into an actionable objective, my internal battles feel less elusive and more grounded in the physical world. It’s much easier to tell myself to move my arms than it is to tell myself to “Feel better.”

After completing my collegiate career, I dove into the world of professional running with my eyes on the Olympic Games. At this elite level of racing, I was finally able to look at my competition and see that they were all experiencing pain too. I just could never see beyond myself to notice.

Of course I can’t _really_ feel someone else’s pain. But I can manage my own pain to the point where I can turn my focus to my competitors. Some runners wear their pain unself-consciously, while others hide it very well. But just like I’ve learned it is often unhelpful to compare myself to other people’s Instagram feeds, I don’t compare myself to how other people in my race look. Looks can be deceiving, and more often than not, only the most glamorous parts of ourselves are outward-facing.

> Looks can be deceiving, and more often than not, only the most glamorous parts of ourselves are outward-facing.​

I remember one race in particular when I was competing alongside an accomplished, intimidating Olympian whose face and posture halfway into the race read strong — but then she suddenly dropped off the pace entirely. If I only looked at her calm face or her relatively even breathing, it would have been easy to convince myself I was the only one in pain. Without a doubt, I learned, pain is the one thing my competitors and I all have in common.

This deeper understanding of pain has helped me chase my Olympic dream, and it has also supported me outside of running. I will not always be able to control what will cause me pain. I realize that some pain is unavoidable or may never go away — for me and for everyone else in the world. But with running, the pain is of the chosen variety, and it is in my control — if I work hard enough I _can_ overcome it.

All pain takes its time. Some hurt grows old and dies, but other times it lingers like the glop of hot-cocoa powder stuck to the bottom of the mug. No matter what variety of pain I am confronted with, I have a choice about how I interact with it and how it will affect me. All marshmallows, when squeezed, can reinflate eventually.

* (1) is a Greek-American long-distance runner and a member of Greece’s Olympic team, as well as a writer, filmmaker, and actress. She co-directed, co-wrote, and starred in the feature film* Tracktown, *and co-created and starred in the* New York Times *short film series* Speed Goggles.