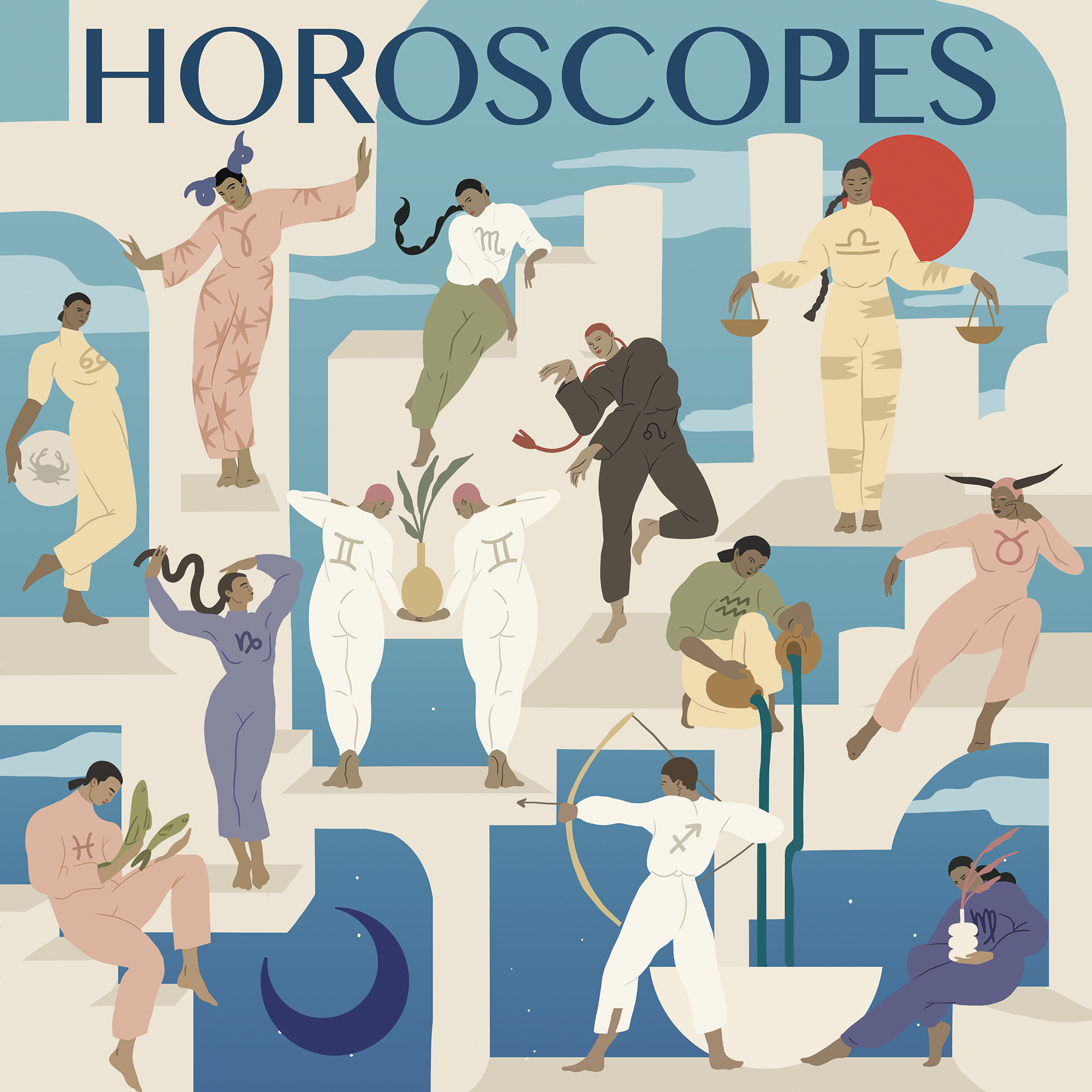 **LIBRA**
*(September 23 to October 22)*
Happy birthday, Libra! It’s harvesting season. Are you planting anything good? Do you like your crops? If you aren’t that DTF with your crops, you don’t have to harvest all of them. Also, you can totally plant some other shit for next year.

**SCORPIO**
*(October 23 to November 21)*
The shortcuts we take out of a fear that we won’t be good enough are actually never as good as what we make honestly, with our whole selves. This month, believe that you are where you are because you are enough in your purest form.

**SAGITTARIUS**
*(November 22 to December 21)*
This month, think of the silent moments you have with others as the times in life that are the most inspirationally fruitful. So often we jam every silence with words, but remember that you aren’t responsible for filling the silence. See what this offers you.

**CAPRICORN**
*(December 22 to January 19)*
Oftentimes, the hurtful behaviors we inflict on ourselves also serve us in some ways. If they didn’t serve us on some level, however perverse, we would put them down immediately. Take a look at how the behaviors that hurt you most also serve you. Is there something else that could fill that gap?

**AQUARIUS**
*(January 20 to February 18)*
There doesn’t have to be such a thing as a bad omen, a prolonged Mercury retrograde, or a negative sign of things to come if we don’t want there to be. As long as we listen to our instincts, we can start a day, an hour, or even a moment over at any time.

**PISCES**
*(February 19 to March 20)*
When you get caught doing something bad that others do all the time, or you get sick, or lose something or someone you love, it is only natural to think, *Why is this happening to me?* Another perspective is that it’s not happening to you but simply just happening.

**ARIES**
*(March 21 to April 19)*
I struggle with acceptance — particularly the notion that to accept something doesn’t mean you have to like it. What does that really mean? One way I have found a little room in this concept is through simply saying the words “It’s like this now.”

**GEMINI**
*(May 21 to June 20)*
Sometimes it seems like we’re supposed to get to a place of wholeness or OKness, and then that’s it, we just stay there and ride it out. But that’s a really weird expectation, because the truth is that everything is always changing. What if the OKness could come in a revised expectation that maybe we never really “arrive”?

**CANCER**
*(June 21 to July 22)*
People ask me if I believe in astrology and I’m like, “Absolutely not,” and also, “Yes.” I do believe in the powers of perception and archetype. I don’t believe that any human system can ever fully map this mysterious universe to a point of control. This month, let our inability to do so be a good thing.

**LEO**
*(July 23 to August 22)*
Even the least judgmental person has areas of their life (and others’ lives) where they feel they know how things should be. This is human and fine, but perhaps not as interesting as accepting that we actually might know nothing at all. This month, leave a little room for the mystery.

**VIRGO**
*(August 23 to September 22)*
A couple years ago, I channeled all of my general anxiety into trying to pin down exactly what my signature scent was. It was only after wasting a lot of time trying to be one thing — one fragrance, so that I could have the illusion of simplicity — that I gave it up and was like, “Actually, I’m like ten signature scents, and they’re all going to keep changing.” This month, pay attention to your desire to pin things down. Maybe let them be unpinned for just a little while.