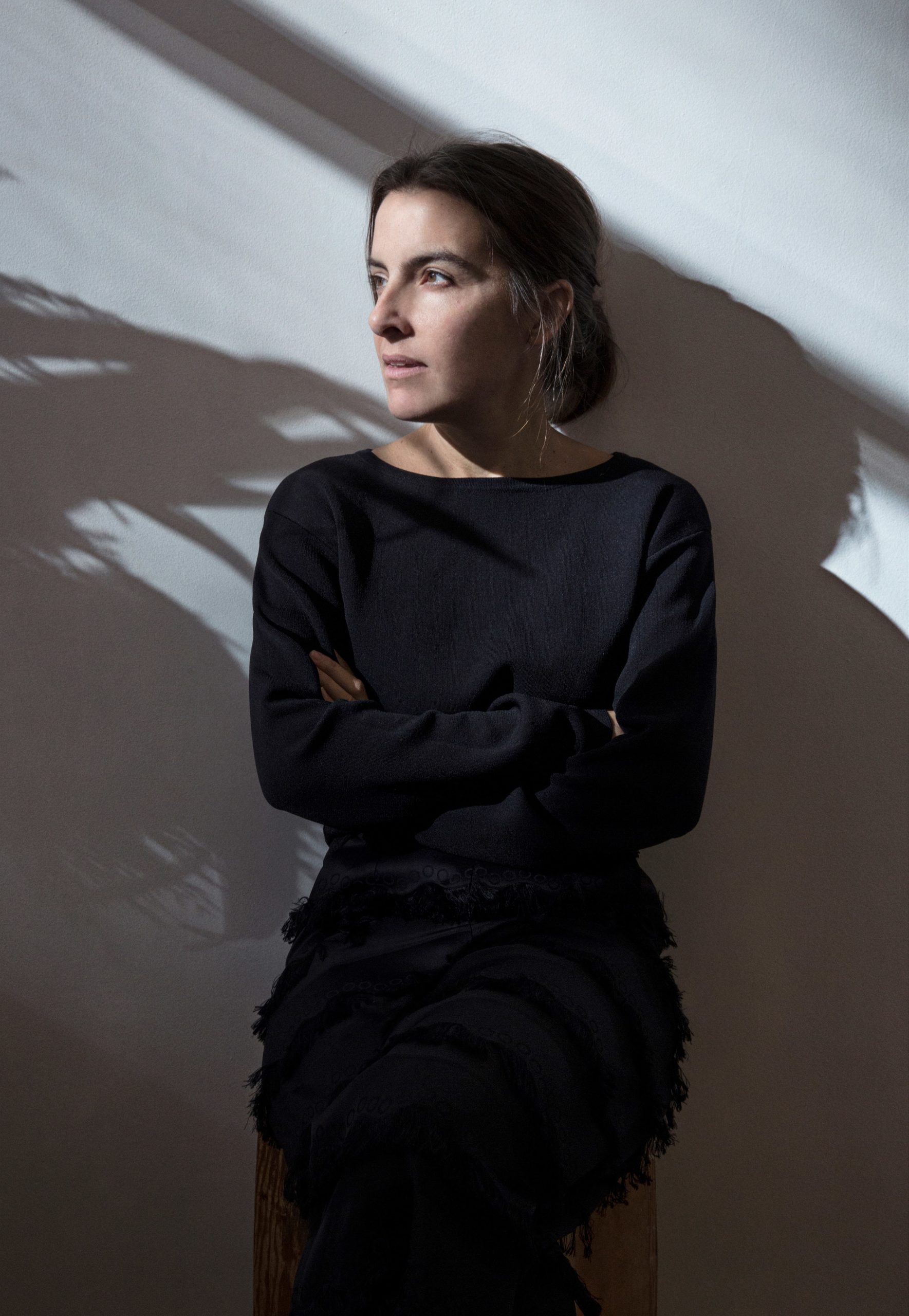 Rachel Comey is dressed like her idea of vacation — clad in a chambray henley T-shirt, pink and green trousers with a snakeskin print, and her cult Mars mules in burnt orange. She’s not really going to some tropical paradise. But today’s hectic schedule at her Noho design studio warrants at least the smallest mental breather. It’s two weeks before she will debut her spring-2018 collection, and Comey and her design team are in back-to-back fittings, finalizing the looks. “I thought, *This will help me relax*,” says Comey of her breezy look as we wait for the model to arrive for the fitting.

The 44-year-old fashion designer’s mood-induced approach to getting dressed is a core concept rooted in her eponymous womenswear label. With every collection, she’s considering where the Rachel Comey woman might be going and how she wants to feel when she gets there. For insight, she’s talking to women around her: her friends, her employees, the customers who shop in her Soho store. “If you think about a certain woman, then that woman has other representatives that are also having those same life experiences,” she says.

For spring 2018, Comey plays with her idea of a boss woman. When she wants to feel authoritative? A slouchy, tailored black suit. (“I tried to think of what you want to wear when you need your clothes to be doing some work for you.”) When she wants to feel a little more off-duty? A Canadian tuxedo, and straw hats that make a statement anywhere. (“For every day, when you’re not necessarily having to kick some ass but you want to dress playfully and with some spontaneity.”) When she wants to get dressed up, the Rachel Comey way? An organza caftan. And it wouldn’t be true to Comey’s brand if any of these looks weren’t interchangeable for any scenario and idiosyncratically feminine.

The New York fashion designer has gained a cult following that includes Cindy Sherman, Zadie Smith, Miranda July, Rashida Jones, and Greta Gerwig for her off-brand approach to muliebrity. For over a decade, her clothing has become a mainstay in the wardrobes of women who would unimaginatively be labeled as “quirky.” But a better descriptor would be “creative women who have things to do, places to go, and can probably recommend you a good book.” The Rachel Comey woman opts for clogs over stilettos, wedding jumpsuits over frilly dresses, and knows a good pair of jeans can be worn for any occasion.

Comey has the advantage of creating from a woman’s point of view, surprisingly a rarity within the fashion industry, where the top womenswear designers are mostly men. She not only listens to her customers’ needs but understands them — as a mother, as a career woman, and as a creative. Her sixteen-year, 100 percent independent streak has been sustained by the power of word of mouth. And Comey isn’t afraid to use hers. So it was no surprise when she rallied other designers together and penned a letter to the CFDA in support of the Women’s March in January.

Her brand is rooted in a feminism that doesn’t need applause or a branded T-shirt but engaging self-aware dialogue. It’s why Comey is the fashion designer women need right now.

Rachel Comey grew up outside of Hartford, Connecticut, with an affinity for art and the five cool teenagers who lived next door (“They were the epitome of freedom and teenager life. It was the ’70s, so they wore clogs, gold chains, denim, and feathered hair, and they really influenced my nostalgia”). Comey understood from an early age that for her, style was about communication; she wasn’t interested in the glamour of the garment but what it said about the person wearing it. She recalls being influenced by women like Gloria Steinem and the gymnast Nadia Comăneci (“She was so strong and resilient”).

But Comey didn’t immediately put these interests into becoming a womenswear designer. She studied art at the University of Vermont, worked at a graphic-design firm, and started a small women’s underwear company. Then, at 26, she moved to New York and took a series of jobs, including one as a costume designer for Off-Off Broadway shows and a consultant gig at Theory (which she was fired from). On the side, she started making woven men’s shirts for her then-boyfriend’s band, Gogol Bordello. A friend of hers was working with David Bowie, and he wanted one of the shirts. She made him two for $100 each, one of which he wore for an appearance on *The Late Show With David Letterman*.

She started getting serious about her role as a designer at age 28. She found a now-closed New Jersey factory to produce small batches of her shirts, which she mostly sold in Japan, and she went deeply into debt. She slowly started to introduce womenswear in 2004. Her first fashion show was guerilla-style on the streets of New York in 2001. And for the first six years of her business, she charged credit cards and earned no revenue. It was the introduction of her now-cult wooden-heeled clogs in 2006 that saw her first profit.

> Her brand is rooted in a feminism that doesn’t need applause or a branded T-shirt.

When I ask her why she kept going, she tells me, “In retrospect, I have no idea. But I think at the time it was fear of failure and if you don’t try, then you don’t fail or succeed. And there was a lot to learn. I didn’t go to school, I didn’t have a mentor, so I had to learn from my mistakes.”

Now Comey has added denim (produced in Los Angeles), accessories, and two brick-and-mortar stores on each U.S. coast. And as of 2016, according to a report from *Business of Fashion*, she was clocking nearly $10 million in annual sales.

One of the most important things Comey learned as she built her business was the power of making decisions that felt instinctive and good rather than “right.” It’s why she’s become a bit of a silent renegade in the design world, born out of both her need to stay authentic to her brand and limited resources. In her sixteen years as a fashion designer, Comey has never done advertising or celebrity endorsements — though, by choice, there are many famous women who wear her clothing — or had investors (“Some people have approached me, but it doesn’t ever seem really worth it yet. But maybe down the line,” she says). Instead, she grew her company by building a community of devoted consumers.

“I didn’t have any access to any celebrity endorsements or *Vogue* editors that people use to launch a brand. But that’s why it just had to grow slowly over time. Word of mouth is strong, and people trust their friends,” says Comey.

Staying true to her role as a connector, in 2013, she opted out of having fashion shows in favor of hosting a dinner party, creating an intimate space with intriguing people who also happen to be fans of her clothing. Over a three-course meal, guests converse and view her latest collection and a performance, one year from Tracee Ellis Ross and another year from Justin Vivian Bond.

“Do my customers care what season anything is? I don’t think so. I think they are just looking for things to wear when they are looking. Ideally, if you’re buying something in June, you should be able to wear it five years later,” says Comey. “The seasons and the fashion weeks, I don’t know how necessarily useful they are, but having the dinners gave me the opportunity to present my brand in a way that was actually meaningful to me and my team.”

The first time I met Rachel Comey was in 2010, and I was in awe of the way she ran her brand. At the time, I was 20 and interning for her casting director Clare Rhodes. Contrary to movies and my experience in past internships, Comey was actually kind and collaborated with her employees. She also called all the shots, cast multiple women of color in her shows, and made time to nurse her newborn baby in between fittings and castings. She was the epitome of a woman fully in command and abiding by her own rules.

“Often, the image that is portrayed in cinema is like the bitchy fashion designer who bosses everyone around. In a way, that was a hurdle to overcome for me. I understood that people wanted this role and they wanted the drama, and I had to find ways to win them over in different ways,” says Comey.

When I meet her at her Noho studio, it’s clear that her demeanor hasn’t changed. Though her staff has grown, it still includes two employees who have been with her for ten years. She now runs an in-house sample factory, which isn’t an option for most designers, who have to send off their specs and measurements and wait for the samples to come back.

We’re halfway through the fitting with the model, Angel, and Comey is asking her how she feels in the clothing and where she might wear a particular garment. It’s a process that Comey goes through each season, trying her clothes on different body types and getting feedback. “Anybody can come here. I see my role as the designer as needing to listen to people and what they say,” Comey says. It’s why she started to expand some pieces in her line to include sizes for men, after some of her male employees started to wear her clothing. Now she gets their feedback on pieces they would want to wear too.

While Comey’s continuing to grow her customer base, she’s also thinking about the bigger picture. But like everything else in her world, it has to be on her terms — personal, conservative and authentic.

*Tahirah Hairston is an associate editor at Lenny Letter. She lives in Brooklyn and spends all her money on skin-care products.*