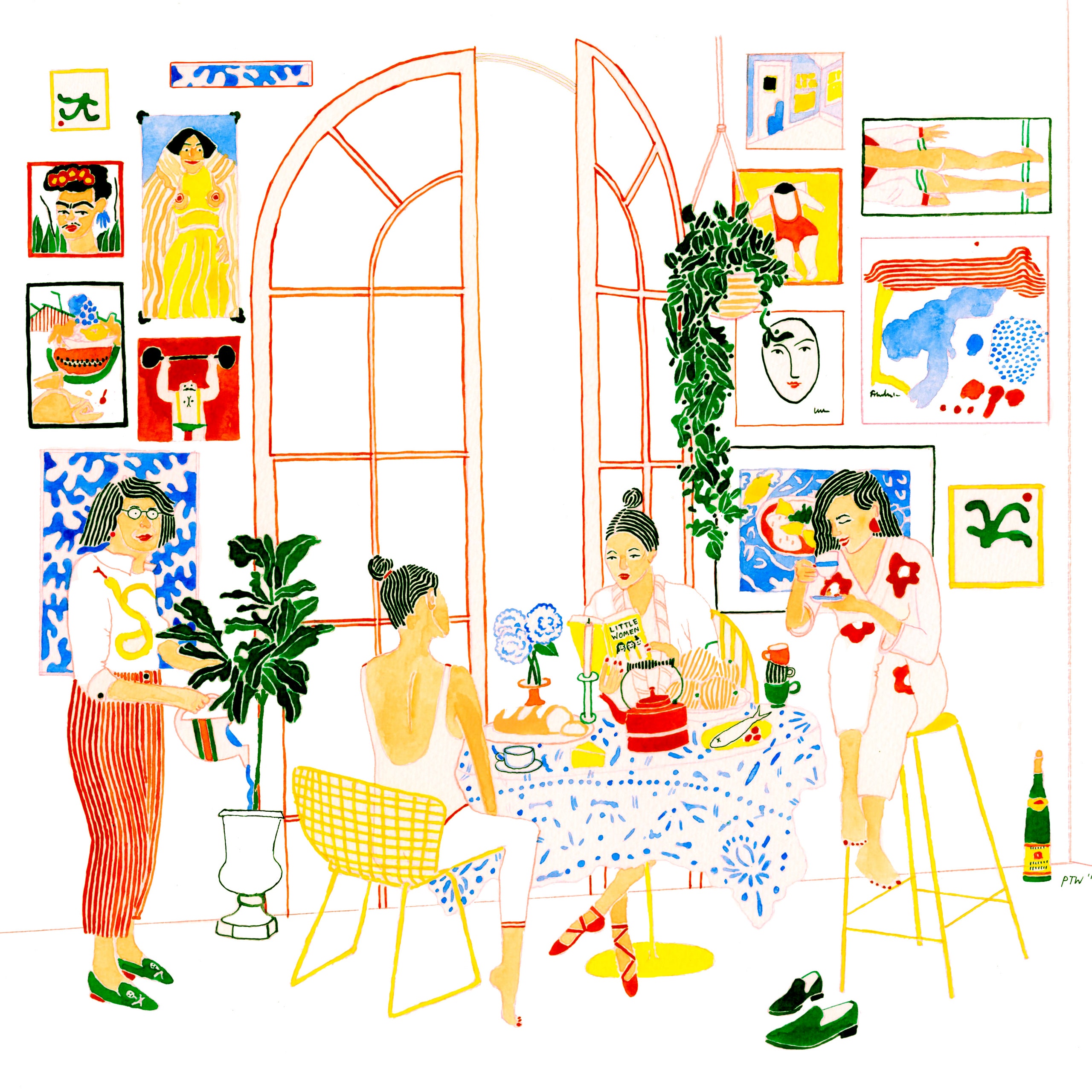 In 2015, I lodged for one year in a brown brick terrace house on Dorset Square. I write “lodged” and not “rented,” or “lived,” even, because “lodged” is what it is when you pay for a room in a furnished house and live with your somewhat older landlady. Life in London is expensive, so finding affordable housing anywhere, and especially in Central London, is akin to winning the lottery; there’s about the same chance of England finishing first in Eurovision or Trump peacefully resigning. MP, my landlady, is an admirable curator and a friend of a friend’s former boss. I’m the third of three girls to quit New York and relocate to London to study art history in this house for art historians.

The flat appealed for what then seemed to be its distinctly English charms: lemon-yellow upholstery, a green Roberts radio, and stacks of teacups. The living room had floor-to-ceiling French doors that opened onto a shallow balcony. When London hit record-high temperatures that July, I’d climb through the windows with an £8 bottle of wine and stretch out. More elegant than a fire escape, the balcony made that time in London feel exactly like summers in New York and not at all the same.

There were always people in and out of Dorset Square. I thought of it like a modern salon in the style of Gertrude Stein or Florine Stettheimer — my own “golden age.” Curators, academics, dancers, they all came to wine and dine. MP was a constant whir with a social life that would make anyone jealous. She’s straightforward in the English way that I’ve never quite managed, brusque but always charismatic and kind. Sometimes, MP would have visitors to stay, and I’d give up my cozy room for a night or two. MP would bring down an air mattress, blow it up in the middle of the living room, and dress the bed in crisp monogrammed sheets. She’d say, “Here are sleeping quarters fit for a Russian princess fleeing the Bolsheviks.”

Alongside MP, I also shared the house with ZO and ZM, two former Hungarian ballerinas, one of whom had been MP’s Pilates instructor. We often sat around the kitchen chatting. (What is it that makes the kitchen the true center of a home?) In the space before Brexit and Trump, we’d debate the changing European order and whatever idiotic statement Nigel Farage had made that week. People, especially Americans, like to tell me that my life in London isn’t different from what it was in the United States, and the shared language breeds a false set of assumptions. The truth is that my friends at home look and sound a lot like me, variations on a similar theme, and the proximity of continental Europe means that London cultivates a different sort of cosmopolitanism. ZM and ZO had grown up behind the Iron Curtain and MP in postwar Britain; their childhoods could not have been more different from my California upbringing. Time and geography meant that our lives twisted in unimaginable ways, and yet, here we were, living together. Our home represented four nationalities and five languages and spanned decades.

Boardinghouses more formalized than my own were once essential to the infrastructure of American cities. They offered, for pretty cheap rent, an equalizing space for both men and women. As Walt Whitman wrote: “Married men and single men, old women and pretty girls; milliners and masons; cobblers, colonels, and counter jumpers; tailors and teachers; lieutenants, loafers, ladies, lackbrains, and lawyers; printers and parsons — ‘black spirits and white, blue spirits and gay’—all ‘go out to board.”

> Unlike rooming with friends or actual family, we demanded nothing of one another. We came and went as we pleased and all had very different schedules. And yet, we were a family nonetheless.

After rejecting Laurie’s marriage proposal, Jo March, the plucky heroine of Louisa May Alcott’s *Little Women*, moves to New York, and the boardinghouse becomes her entrée into an exciting and dynamic new world. “I shall see and hear new things, get new ideas,” she tells her mother after laying out her plan. That chapter is, in all honesty, dull (or maybe Jo just kept a dull diary) but for the first time, she has adventures all her own and even meets Fritz Bhaer, her future husband. I carry *Little Women* to all the places I live, so despite being of another time and in a different city, I was following in her wake, though I hoped it would be altogether more wild and irregular.

We’ve come to think of boardinghouses as quaint in the mold of Jo’s adventures in the big city, but the actual history is less charming. If homemaking in the nineteenth century was overly romanticized, then boardinghouses, where paid labor and domestic tasks commingled, were hotbeds for vice. The flirtatious housewife, the gambling tenants, the perpetually drunk and perpetually unemployed husband, the sex-crazed daughter — these were widely disseminated caricatures that became a part of American folklore. Historian Wendy Gamber goes further, writing, “Sometimes in reality, most often symbolically, boardinghouses easily dissolved into brothels. Like brothels, they sold women’s services, bringing housewifery into the marketplace.” These views cemented the belief that boardinghouses traffic immorality and that home and work should be distinct from one another.

While this may sound harmless, recent elections are a reminder that fearmongering shapes public opinion, and after more than 50 years of this rhetoric, it’s no surprise that boardinghouses faded from the urban map. But economic and infrastructure developments also contributed to their demise. Improvements in public transportation at the start of the twentieth century encouraged people to move to the suburbs and commute for work. Growing affluence meant more and more people were able to live on their own. Ultimately, the home (the single-family ideal) won out.

Despite the obviously swollen rents in London (and New York and San Francisco, just to name a few), my living situation always inspired questions. “Is it, like, really your home?”; “Don’t you want to live with friends?”; and, most telling, “Why does she have lodgers anyway?” The obvious truth is I liked living there, and it was certainly nicer than anything else in my budget. I liked the room with a big window and the books and the air of an old-fashioned intellectualism. The real answer, of course, is more complicated, not just in financial terms. Unlike rooming with friends or actual family, we demanded nothing of one another. We came and went as we pleased and all had very different schedules. And yet, we were a family nonetheless. Unplanned and unprovoked, MP offered me guidance both personal and professional, about having a career and a relationship or who to contact about a certain painting, a perspective that friends my own age could never have provided. The Hungarians treated me like a little sister, buying me cake on my birthday and poking fun at my dinners. While these people couldn’t replace my actual flesh and blood, we were an imitation family, and we took care of our own.

Sometimes I wonder if I will ever live alone. Adulthood (at least in the movies) always seems to mean your own home with a stocked refrigerator and an endless supply of toilet paper. But intentional communities appear almost novel again: formalized co-ops, group parenting, and even Common, a start-up investing in co-living. (1) details Common’s merge of high-tech and hippie ideals.) And if the (2) are correct, I can expect to make way less money than my parents (not just because of my art-history degrees) so I imagine roommates of some form will remain a constant.

Yet there’s something about lodging that feels fundamentally different from other arrangements. I didn’t choose Dorset Square to find a community. Like Jo, like the Hungarians, like countless others, I came to a big city for an opportunity. Together, we all are seeking something professional and not personal. Lodging allowed me to find my footing in a city far from my own; it’s a launch pad into the unknown. I may have given up the freedom to choose a couch and the opportunity to walk around naked, but I had access to people whose perspectives and experiences were indispensable and who cared enough to help me move my life forward.

I left Dorset Square to live with my boyfriend, but shortly thereafter his job moved him back to California; it was a brief cohabitation. I’ve calculated that since leaving for college, I’ve had fifteen addresses in less than ten years, and I now have added number sixteen. Thanks to MP, I’ve landed in another art historian’s home, though this time it’s just me and her. I’m excited: once again, I will be living behind a large door, in a house filled with books, paying absurdly low rent.

*Grace Linden is a PhD candidate at the University of York.*