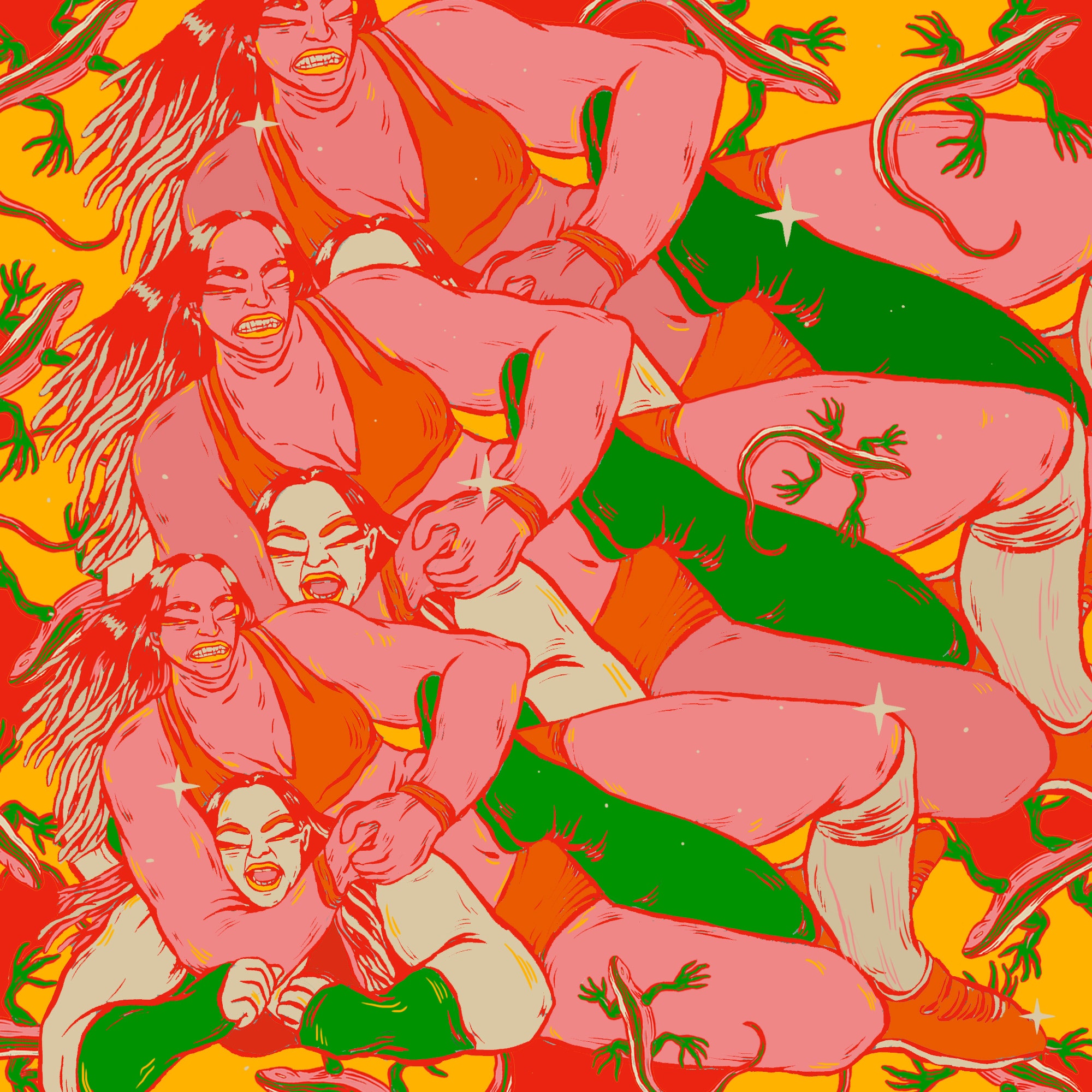 I was always an odd child. I mean this objectively: I wore thick plastic glasses, I was prone to moody contemplation, and my favorite food was a bowl of soggy Rice Krispies. I was neither white nor Black nor Mexican, which meant, in the topography of my public elementary school in Oklahoma, that I was landless.

In its own way, this was poetically appropriate. My parents, Palestinian and Syrian immigrants, had fled Kuwait after Saddam’s invasion, when I was four, ultimately settling down in a university town in the Midwest for a few years. We tried to fit in, but some things can’t be helped. We changed our names, bought Lunchables for school trips, and strung a small tree for Christmas, but children can sniff out difference, and those years we mostly spent alone. Like many a loner before me, I sought shelter in my own imagination. I had multiple rituals, verging on the obsessive-compulsive — never let the volume be an odd number; say the names of those I loved four times before sleep; steal matchboxes from every restaurant we visited — little contracts with the universe to keep my brother safe, keep the funnel clouds from touching down, let the popular girls smile at me in the hallway.

Learning English coincided with learning to read. Since I hated sports and since sleepovers, in (1), weren’t allowed (“You have a bed in your own house,” my father liked to helpfully point out), I had plenty of time to read, everything from the Babysitters Club books to Toni Morrison. When you’re emotionally code-switching between Hala and Holly, brown and white, English and Arabic, it’s easy to participate in your own self-erasure. Each identity was conditional; if I wasn’t fully any one of these things, then I was, essentially, none of them. This left me free — to become Jay Berry Lee and Jessica Wakefield and Nick Carraway and Holden and Heidi and Sherlock.

Even for such a greedy reader, there were many words I didn’t know then. *Displacement*. *Refugee*. *Intergenerational trauma*. *Translocation*. My parents lost everything during the Gulf War. Bank accounts, childhood homes, a city they’d built a life in. They started over in a new country. They worked as bank tellers and gas-station attendants. Like most immigrants, they became psychologically bilingual, acognitive dissonance emerging between a private Arab household and the outside world of strip malls, Republican lawn signs, and autumnal square dances. I was the archetypal good immigrant daughter: obedient, quiet, sly. I hated spring, well-known for tornado season, and spent my spare time watching the Weather Channel. I studied the clouds outside not for faces but for threats.

Whenever I think of those years, I picture a sleeping volcano — the mutiny is yet to come, an adolescence of sexuality and deceit and addiction — a mound of silent earth, but beneath it fiery, chattering veins of lava. This is where I waited for something to change. This is where I let myself want.

I don’t remember the first time I watched professional wrestling. All I know is there is a seismic shift in my childhood memories, a bland, skittish before, and an after: brighter, gutsier, my weird little heart captured by the sport. It was visually beautiful — a feast of dazzling colors and strobe lights and glitter — Lisa Frank with attitude. I was mesmerized by the ornate championship belt, the ever-changing alliances, the accidental expletives that, even bleeped out, were exhilarating to a girl who once whispered fuck into her pillow at night and promptly recited Quran as penance. The wrestlers were superheroes of their own making, unafraid of thunderstorms or escalators or Mrs. Sibinski calling on them.

> The wrestlers were superheroes of their own making, unafraid of thunderstorms or escalators or Mrs. Sibinski calling on them.

Every Monday evening, I sat in front of the television with my brother, rapt as a churchgoer. The constructed reality of professional wrestling never bothered me. Anna Karenina wasn’t real. Sweet Valley High wasn’t real. Childhood is one big exercise in suspending disbelief, and I did so happily, howling when the wrestlers flew through the air with their impossible bodies, weeping when my heroes got smacked with a metal chair to the head. I didn’t believe in Superman or Santa Claus, but I believed in Shawn Michaels. I believed in the audacious story lines, the ripped men and Amazonian women, and, more than anything, the sense of stability. In a world that had revealed itself to be chaotic and fickle, having something I could count on was enormously curing. My favorite wrestler won a championship in a last-minute dropkick, a stroke of luck that left me pumping my fists in the air, dancing around the living room to his customary music. Most of the time, I was a lonely, unpopular child who ate labneh and honey sandwiches for lunch. But for those minutes, I was as invincible as Michaels. My parents couldn’t trust land. I couldn’t trust sky. But I could trust this.

For wrestling to work, everyone must play their parts. There is no indecision, none of the messiness of life. There is no room for contradiction. The good guys are handsome and fretful, and people cheer for them. The bad guys are loud and smirky, and people boo them. Even when you love the bad guys — e.g., the Undertaker—you boo. That’s *your* part. The bad guys aren’t invested in changing the crowd’s opinion. They don’t care. Yes, there’s colonialist, racist, Eurocentric undertones: The Iron Sheik with his absurd signature “camel clutch” move, the Latino wrestlers with cartoonish outfits and accents, entire plotlines centered on patriotism. But even as a child, I think I understood the irreverence of these caricatures, how by forcing the audience to witness their own devotion — or antagonism — toward certain archetypes, there was something slyly subversive about the entire enterprise.

I liked the troublemakers. I was a straight-A kid who sometimes stammered in class because I couldn’t mentally translate a word from Arabic to English fast enough. Even well into adolescence, I rebelled silently, fought my battles passive-aggressively and offscreen, which made their riotousness all the more cathartic to me. I loved Degeneration X, loved the beer-swilling Triple H and Road Dogg. Theirs was a straightforward, thrilling mischief. They became godlike to me. I bought their action figures, but something strange happened when I tried to play with them — it got messy again. I didn’t know how to keep it simple. I had them fallin love with each other; I gave them fathers, mistresses, intricate backstories. After a while, I stopped playing with them.

***
For every female wrestler who was rescued by a Steve Austin, there were two who saved themselves. Their bodies were as essential as the men’s, and the women were unembarrassed by their sexuality. My favorite was Chyna. She oozed black leather. Every man she loved, I obediently loved as well, though it took me years to figure out that I was just in love with her. My love affair with professional wrestling ended abruptly, unceremoniously, after my family moved back to the Middle East, thanks to a combination of bad cable and conflicting time zones. I slowly forgot about the wrestlers. But I continued to mimic Chyna in subtle, unconscious ways growing up — cutting bangs, adopting stoniness, seeking group after group of men I could be the sidekick to. Now I wish she’d been more of a main character. When I found out she died, I was almost 30, and I walked an hour over the Williamsburg Bridge to stand by the pier and cry like a baby.

Sometimes, I Google my old gods. There’s a lot I’ve had to put together as an adult: how most moves and “throws” require wrestlers to carry each other, how there truly is abrilliance to such oversimplified portrayals of good and evil, the death wish inside all of us that hungers for Jungian archetypes of disruption and nihilism. What such hunger teaches us about ourselves. As a child, when I discovered that the matches — despite the identical, Crayola-bright wrestling rings and elaborate light displays — were actually taking place in different cities every week, reconstructed Monday after Monday, I was floored. At nine, I had already lived in four countries, and this revelation changed me: here was proof that one could make a home on different shores, without having to stay still.

*Hala Alyan is a clinical psychologist and the author of the novel* (2).