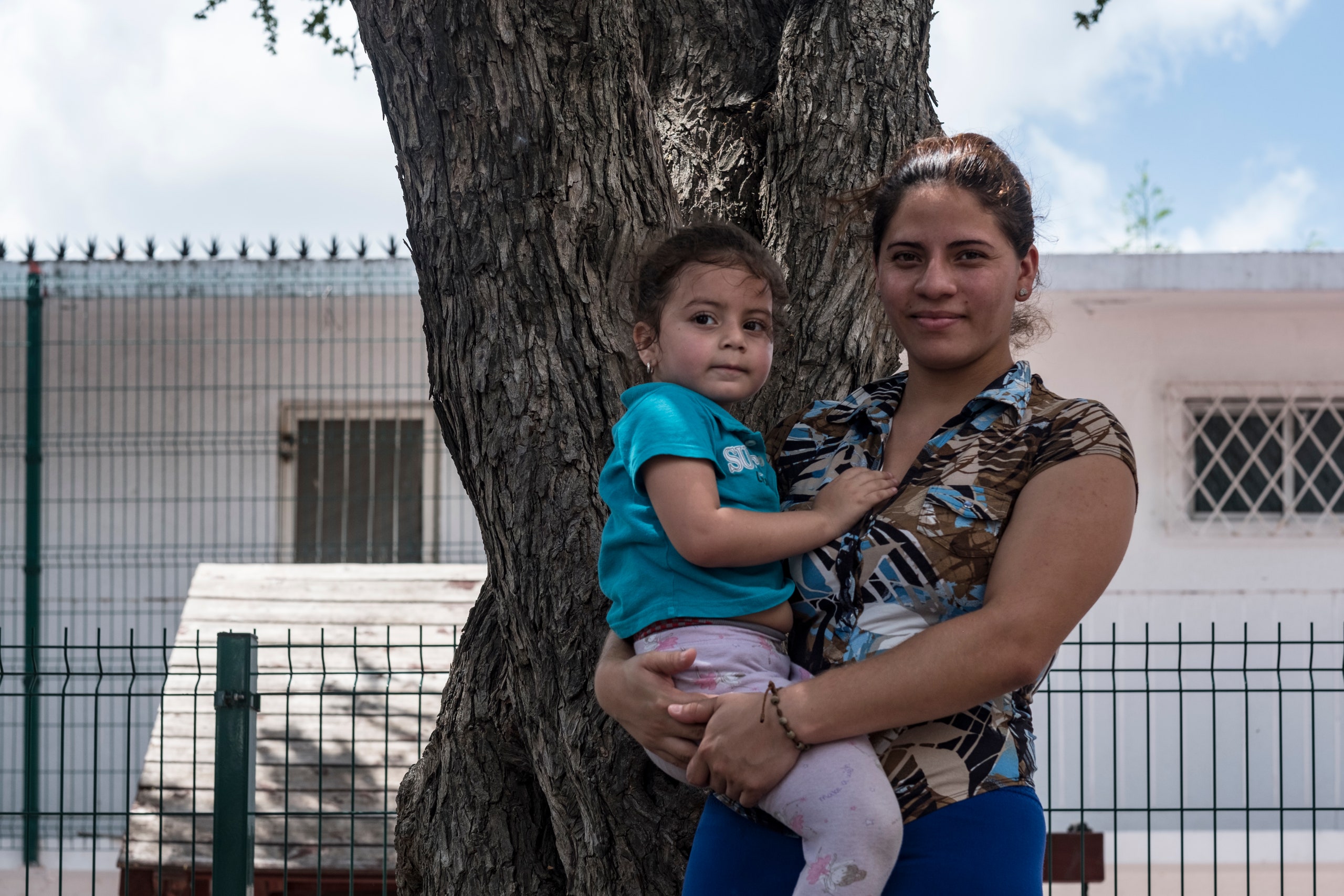 “I was always hot and sweaty,” Valeria Fernanda said. The three-year-old squirmed in her chair, her ponytail bobbing, as she described the month-long trip that began in July 2018, when she and her mother migrated from Estelí, Nicaragua, to Reynosa, Mexico. Then, turning to her mother, Hazel Yolibeth Argueta, 22, who has matching gold-flecked hazel eyes, she said, “I want to go play on the swings,” and pointed to the playground. The two were staying at the Casa Hogar del Niño shelter while they applied for asylum in Mexico. Argueta, a single mother and a second-year nursing student at the university in Estelí, found her life upended when protests, which had erupted in Nicaragua in April, turned violent. It wasn’t long before she began receiving death threats and decided to flee.

Daily life in Nicaragua during the protests was a challenge. As Argueta described, “We were in danger because my country is in bad shape; food is expensive, there are national shortages all the time, you can’t leave the house because you might get hit by a stray bullet and there is no functioning police force.”

Nicaraguan President Daniel Ortega, who was re-elected in 2006 (he served his first term as president from 1985 to 1990), (1), which citizens have demanded, will create instability, and that the best thing for the country would be to keep him in office until 2021. In Nicaragua, presidents have traditionally been limited to two consecutive terms of five years, but in 2014 the Nicaraguan National Assembly approved changes to its constitution to allow Ortega to run for a third term.

In addition to (2) and freedom of expression during his time in office, in April 2018, (3) that would have increased taxes and decreased benefits for a population that was largely living on the edge of poverty already. In response, senior citizens and students joined forces to protest in the streets, and eventually, pro-government paramilitary forces responded with violence. By August, pro-government forces had killed over 300 students around the country, including some still in elementary school. The government has tried to dissociate itself from the violence by saying that those who have killed students are civilians, but students and other protesters believe that only the government could afford to train and hire snipers, and would have the motivation to do so, to quell protests.

When (4), I met with some of the 400 Mothers of April whose children had been murdered or disappeared by pro-government forces. (5), 55, is the mother of Jonathan Morazán Meza, 21, who was shot by a sniper at a protest in May. After Jonathan’s murder, she sent her eighteen-year-old son to Costa Rica, where he would join some (6). Meza stayed in Nicaragua to fight for justice, to march with the other mothers. “I’m not scared. Because if is going to kill, he will always kill people, because he is a murderer,” she said. “And even if he kills 1,000 or 2,000 or 3,000 or 4,000 or 100,000 people, he can kill, but he can’t kill everyone.”

When I interviewed Jacqueline Valdivia, 41, the mother of Christopher Nayrobi, eighteen, who was a student in León, she described how the police illegally detained him for protesting. “We are being repressed for expressing our views,” she said. “They want to silence us. And my son doesn’t like that.” At the time of our interview, she had traveled to Managua to request that the Nicaraguan Center for Human Rights help get her son out of detention before he was tortured, as so many students have been.

When citizens like Meza and Valdivia, led by students, began to protest in April, Argueta was busy working full-time at a casino and studying at the local university. Her friend and fellow student Franco Alexander Valdivia (no relation to Jacqueline), who did participate in the marches, was shot in the head by a pro-government sniper.

Shortly after Valdivia’s death, Argueta, who lived with her mother, began to receive threats. “They wrote my name on a piece of paper and the name of my daughter,” she said of the first threat, which was left inside her mother’s home. Argueta believes she received the threat because she was friends with Valdivia. Later, someone left a wooden cross in front of the house, which Argueta described as the way pro-government forces mark houses whose inhabitants would be murdered.

Argueta decided to take her daughter and flee to Mexico in hopes of reuniting with her father, who lives in Puebla. To leave Nicaragua, she needed written permission from Valeria’s father, but, in a rush to flee, she didn’t get it. She fled, worrying that her daughter would not be allowed out of the country, but the two managed to escape and travel by bus through Honduras, Guatemala, and Mexico. Argueta’s mother initially decided to stay in Estelí but later fled to Honduras, after she found the words “more bullets, more bullets” painted on her house.

When Mexican photographer Jacky Muniello and I attended a march organized by the Mothers of April on September 2, 2018, in Managua, we saw a city in chaos, one in which citizens young and old protested en masse, shutting down the streets despite the very real possibilities of being shot, beaten, disappeared, or jailed and tortured. As the mothers marched, they carried poster-sized photos of their children in the air.

|||Hazel Yolibeth Argueta with her daughter and two other migrant children.|||

“What we want is peace,” Argueta said, sitting near the playground in front of a mural that featured the tiny handprints of children who had stayed at the shelter in Reynosa. “Nicaragua is beautiful, but unfortunately it has become a country at war,” she explained. Later, when I walked back to the dormitories where mothers and their children stayed, I caught sight of Argueta standing in front of the dorm-room window, which was covered in pink metal bars, tenderly fixing Valeria Fernanda’s ponytail as two other migrant girls, both eight years old, gathered around.

Although Argueta had reached the US-Mexico border, she made it clear that she had no plans to request asylum in the US. Aware of President Trump’s continued policy of separating migrant parents from their children, she said, “My daughter and I have never been separated. I would resist anyone who tried to separate me from my child.” With the help of the staff at the shelter in Reynosa, she was requesting asylum in Mexico in hopes of being reunited with her father. “I didn’t finish my studies, and that weighs on me, but fleeing my country is better than death.”

* (7) is a freelance journalist and translator based in Mexico City.*