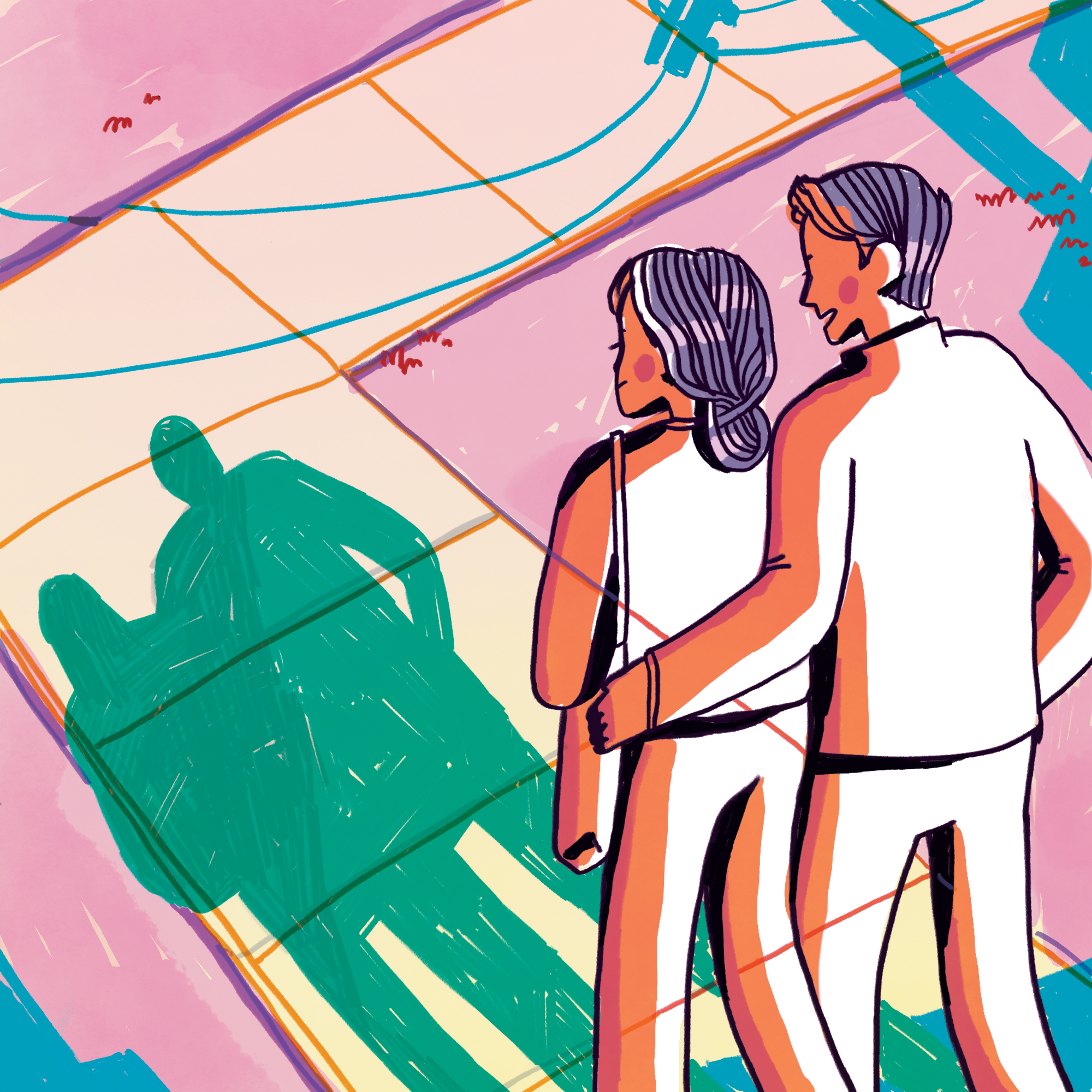 It was the late ’90s, and my roommate, Jessica, and I were walking home from the bar. We’d just moved to town and had only a handful of friends, mostly other transplants. A block from our place, an acquaintance of Jessica’s from college spotted us and pulled over to say hello. The next thing we knew, he was leaving voicemails on our answering machine, asking if we wanted to hang out.

Mark played in a band, like almost everyone living in Seattle at the time, and he was easy to be with and quick to laugh. On a sunny Saturday in May, we took a picnic to the grassy lawn of a nearby park and something magnetic happened. I wasn’t looking for a relationship, but it felt like all of my ions were realigning against my will. Suddenly, Mark and I couldn’t be apart.

We spent the next year together camping and hiking, skiing and kayaking, smoking weed and going to jazz shows, ordering takeout and making out on the couch. A year later, when the lease came up on my apartment, we shacked up. His apartment had wood paneling, pink cabinetry, and a green shag carpet. We slept plastered to each other on a single mattress on the floor. It was just a short-term thing, I said, until I figured out my next move.

Each night as we fell asleep, I wondered if this was it. Our mid-twenties seemed like both an impossibly young and perfectly legitimate age to get serious. On the one hand, I loved being around him. No matter that we forgot to pay the bills — he calmed my nerves and made me laugh. I was the happiest I’d ever been. But my mind was halfway out the door. We were two artists working lackluster jobs, slackers feeding on each other’s lazy energy. Something else was out there.

In early June, Mark’s old friend from high school showed up carrying a towering backpack and an ice ax on his way to climb Mt. Rainier. When I opened the door to greet him, something shifted; all my little ions spun. Scott had strikingly serious eyes; he’d just run the Boston Marathon; he was traveling solo. I felt energized just by being near him. Someday, I thought to myself, I would marry a guy like this. Of course I couldn’t marry him specifically, because he was Mark’s best friend, but I told myself I would find someone like him.

The three of us made dinner together that night and had beers out on the AstroTurf deck. Scott left the next day, and a month later I moved out of Mark’s place into a studio of my own. My third-floor walkup had a sweeping view of the Olympic Mountains, and, while Mark and I continued to see each other, I spent most of my nights alone, writing at my desk — plywood balanced across two sawhorses.

By the end of the year, I had the draft of my first book and an acceptance to graduate school in New York. When Mark asked if he should move with me, I said no; I didn’t want to be worried about how someone else was faring while I was pursuing my dream. So we provisionally broke up, acknowledging that we still loved each other. And somewhere over the Great Plains my heart tore apart.

The day before I left for New York, Scott moved to Seattle. A few months later, he met Elizabeth. They both had great résumés, serious competitive streaks, and nerdy, tech-oriented brains. They camped and hiked, skied and kayaked; they went to shows and probably made out on the couch. It seemed like a good match. Elizabeth got to know Mark, and she and Jessica, my old roommate, became good friends.

A year went by, and Scott returned to the East Coast for graduate school. He emailed me when he arrived, and I happened to be in Boston. We had dinner together and went to a party. When I casually asked how things were with Elizabeth, he was blasé. “We’ll see,” he said. They hadn’t officially broken up, but neither did it sound like a lasting love. I was still transfixed by his striking eyes, the intensity of his gaze, and his indefatigable energy, but I returned to New York and threw myself into my second year of school. I went out on some dates with my grandmother’s neighbor’s grandson and a fiction writer I’d met at a bar.

The leaves had barely turned when I got a call from Mark informing me that he and Elizabeth had fallen for each other. He wanted to know if I was OK with this, and with the idea that the two of them could make a life together. At first I was shocked. Wasn’t it too close, and too soon? But of course I didn’t say that. Why would he even ask for my permission? My blessing? As if I had some agency in the matter of two other peoples’ wanting?

I was sitting on the floor of my little graduate-housing apartment in Morningside Heights — a twelve-by-twelve room that looked out onto a brick wall, the same little room where Mark had come to visit me after 9/11, the place where I’d stayed up many late nights writing — and I said I was happy for him and I wished them well. And then I flipped my phone closed and cried over this lost possibility.

I was still sitting on the floor when the phone rang again. This time it was Scott, calling from Boston, wanting to know if I’d heard what was happening in Seattle. He sounded more aghast than sad. True love or not, this new match broke a cardinal rule of romantic relationships: don’t date your friend’s ex. But now all bets were off. After we’d confirmed what we knew, there was a moment of silence.

“What are you doing this weekend?” he said.

A whirlwind courtship ensued, with dates at the Met, ice-skating in Central Park, and dinner at Blue Hill. Scott didn’t like Manhattan, but he was eager to explore the city with me. He was patient, practical, hardworking, and visionary; he was generous of spirit and game for adventure. He also picked up my laundry from the laundromat and cooked me dinner on the nights I was working late. We decided to get married on our third official date.

The following summer, Scott and I packed up his Honda Civic and drove back to Seattle. It was the city we both loved, a place we’d chosen independently and now, again, together. The decision to move in with him felt deliberate, not merely convenient, as it had with Mark. And yet, certain as I felt about this choice, I spent many miles of that drive wondering what it would be like returning to our group of friends now that our relationships had been rearranged.

Inevitably, for a time, Scott and I saw Mark and Elizabeth everywhere we went. Scott didn’t want to lose his relationship with Mark. And all of us had so many mutual friends. But while Mark and Scott never seemed bothered by seeing each other, Elizabeth and I chafed. If Mark and I talked or laughed together, Elizabeth looked anxious. When Elizabeth and Scott shared a moment, I always thought I saw him shimmer; I wondered if he was having second thoughts. And whenever I called Jessica, my closest friend for a decade, she seemed to be busy with Elizabeth. In my darker moments I felt that Elizabeth had walked neatly into a life I’d made and replaced me with a newer, cooler version of the friend and girlfriend I once was.

But of course it’s not that simple. The elements in a relationship that make a person the best version of herself aren’t easily named or foretold, and the trickiest part is that they change over time. Mark and I were good for each other at the time in our lives that we were together. I’m grateful for him, for that, for us. And I’m glad that, when we needed something else, we were strong enough to let each other go.

It took more than a decade and three children between us for Scott, Mark, Elizabeth, and I to figure out how to be together. Our configuration multiplies the “seeing an old flame” conundrum by two, and while many people wonder what it would have been like to have ended up with so-and-so, we four probably have a clearer picture than most. It’s not surprising that we all enjoy each other’s company — Mark still makes me laugh, and even Elizabeth and I, each a sort of mirror of the partner we ultimately chose, like each other immensely. But unlike the early days of our reconfiguration, we don’t try to force it.

The opportunity to tell the story of how Scott and I met has come up countless times in the course of our fifteen years together, and the version I tell depends on my mood. Sometimes I admit that I still love Mark, and probably always will. I admit that there have been times when I’ve wondered if we all made the right choice. And I have to admit that when Scott and I were writing our wills and discussing whom, of all the people we know, we’d most want to raise our child in the unlikely event of both of our deaths, Mark and Elizabeth’s names floated to the top of our list. The thought, the possibility, was at once obvious and bizarre.

So maybe this story is about how time and place can irrevocably define the possibilities of our partnerships. Maybe it is a story about true connection, the strange ways in which it is found, and the importance of listening to the heart over the head — or any other rules in the dating book. Or maybe it is a story about forgiveness, the greatest of all human challenges. Having let each other go and forgiven each other along the way, the four of us pair-crossed lovers have been left friends instead of enemies, capable of living in the same city that brought us together, the place we all call home.