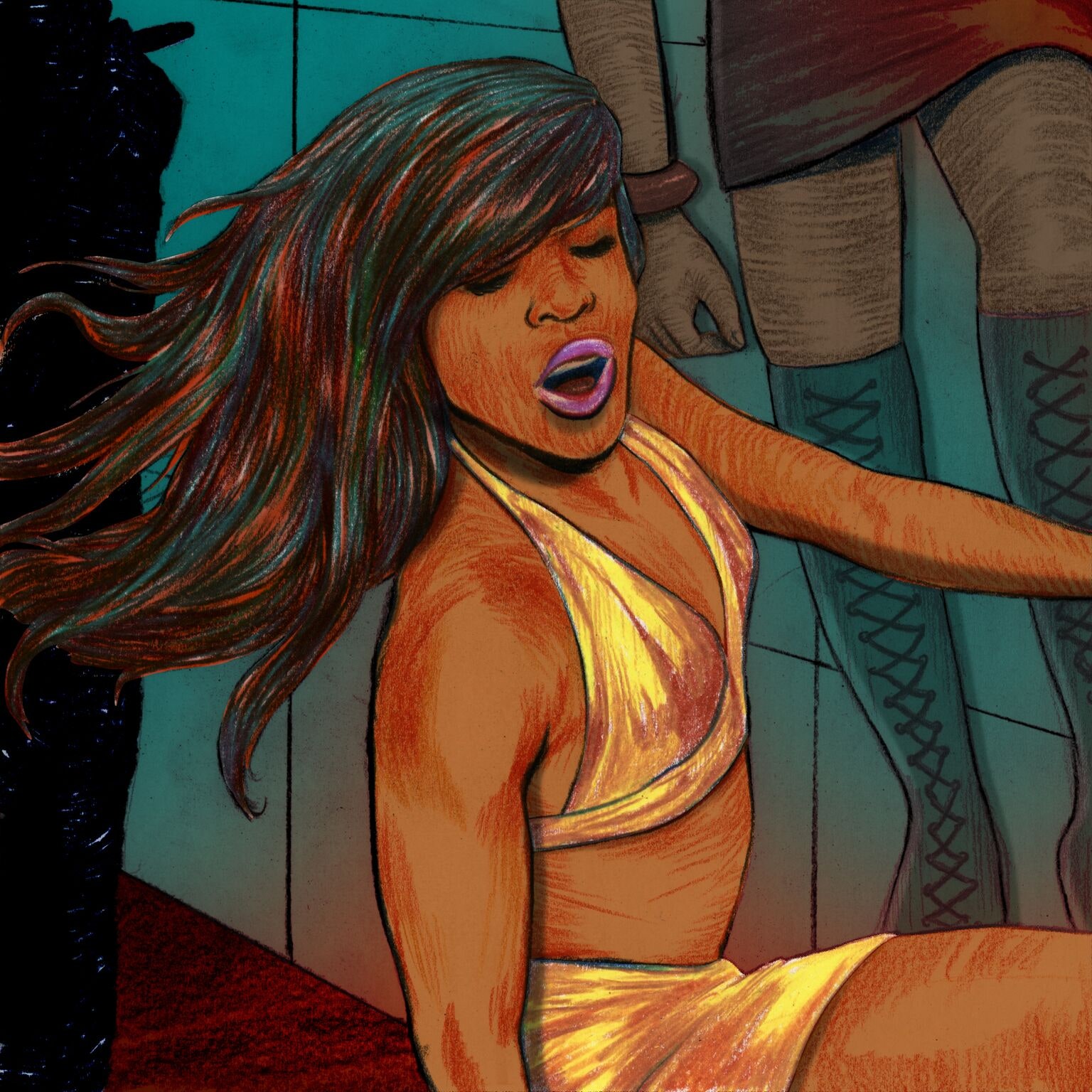 We were outlaws. Twice we had been expelled from a womb: first as boys, then as women. Jamaica had been calling itself a country for only 50 years when we converged on the capital in search of our destinies. We were soldiers — warriors prepared to die on the battlefield miles away from the homes where we were christened as boys. We smudged our war paint across broken faces and armed ourselves with our mothers’ things — the things we snatched from them to remind the world of the women we came from. The women that we became.

We thirsted for color. A patch of golden sunshine. A splash of blue. Tinges of red and purple and orange. The sky was a brilliant canvas for our dreams in New Kingston. We hoped our present would be nothing like our past — intolerable. Some of us rode the buses from the lush countrysides of Hanover, St. Mary, Bull Bay, St. Elizabeth, St. Thomas, clinging to hope. Many of us came from the sandwiched lanes of the Garrisons — shantytowns in the East where we still remembered the names of our neighbors and the dons who brought our family Christmas gifts and foods they cooked and shared from their pots.

We wanted more. We wanted beauty like we wanted laughter. We wanted to float away, to soar into that colorful sky like the jets heading to America that Floydesha, whose eyes were always trained on the clouds (like those old ladies sit on their verandas awaiting the day of judgment), would point out.

> We wanted more. We wanted beauty like we wanted laughter.

“Look, look! Anotha one! Quick before it fly pass!”

Josie and Farika would come running from their sheds with the speed of goats being chased by schoolchildren, waving sheets and towels and rags over their heads as though the pilots could see them — dark specks in a sea of green below the clouds. Bobbett and Gia banged on Dutch pots in their shed with rocks the size of their fists until their palms blistered and bled. Each one screamed, “We deh yah! We deh yah!”

Even Lena and Krissa, who were perched on their rocks — one on each side of the gully bank to keep watch — joined in on the action.

Pedestrians passing by would have snickered at the sight of eight rowdy sissies — all in women’s clothing and barefoot, waving rags we wore or slept on, jumping up and down like the flustered market women from Rae Town in the presence of a political figure. But no pedestrian ever wandered over to where we hid in the gully. Only police officers came, wielding batons or stroking the lengths of rifles.

> But no pedestrian ever wandered over to where we hid in the gully. Only police officers came, wielding batons or stroking the lengths of rifles.

In this muggy heat, we smelled our rotting flesh in the gully where we hid. We were so skinny that our limbs resembled twigs. Some of us barely had anything to eat for days, sometimes weeks. We scrounged around the city looking for food, picking mangoes and guavas off trees. We savored every seed, every skin, for our hunger ambushed us like the nights that reminded us of our mortality.

There were eight of us. Girls between the ages of thirteen and twenty. Some of us appeared with our fingers still in our mouths. _”Me want me mother, but she nuh want me.”_ Others appeared with bad habits of wetting the bed. _”Me dream seh dem catch me an’ carry me guh bush fi hang me.”_ Most appeared with nightmares that had us clawing at our own flesh in our sleep. Some of us ran away. Most of us were disowned. We were thought of as feeble-minded boys who probably came with cauls.

_”Tek ah bokkle ah white rum an’ pour it ovah some eucalyptus. Put ah pinch ah salt an’ a touch ah garlic an’ olive oil. Rub it all ovah him an’ seh ‘Get thee behind me Satan’ three times.”_

When spells didn’t work, we were boys who deserved to be chased with bottles and knives and machetes for forgetting our crowns of privilege in the gutters, lanes, and bushes where it never existed in the first place.

Death shuffled through the streets of Kingston, and we knew that we were doomed. For though the city was leisurely, unhurried, sauntering under the weight of the sun, at every turn our shadows clashed and crossed with the residents like black swords — _”Batty bwoy fi dead!”_

But no one had said it would be easy out here. We had to know how to survive. We had to know how to carry ourselves — our pupils always darting to the sides to watch our backs. Out here we were the hunted. Our predators were men who cornered us in alleys, vendors and business owners who demanded that we go somewhere else, women who grabbed their children and covered their eyes, their own gazes snatched away from us.

Yet the shadows of possibilities emerged in our minds. Anything could take place in these shadows — dub beats and lovemaking, emerald promises and orange haze from the dwindling sunset. With the hotels, banks, restaurants, and nightclubs that opened and closed then reopened — it seemed like a place for new beginnings. Even the name implied this — New Kingston. But it soon became evident that this place was too small to hold us.

> Anything could take place in these shadows — dub beats and lovemaking, emerald promises and orange haze from the dwindling sunset.

One night, Josie and I snuck out to a dance. We liked the idea of getting away from the gully. Lena and Krissa would’ve scolded us if they ever found out, their motherly love more smothering than that of our real mothers. As the other girls slept, we hopped the fence. The dance was taking place on Mountain View Road. By day it was a playground that attracted goats in search of the sparse weed that sprouted from the concrete. It also attracted footballers — boys bored with school yet still dressed in their khaki uniforms, balancing balls instead of books on their heads. But at night, under the amber hues of streetlights, the place transformed into something looking like a carnival.

There was lots of flower-scented talcum powder, mostly on the necks and chests of the women who stood, poised, with thick legs wide apart, their knees and feet turned inward inside knee-high boots. They absentmindedly fanned away the heat (though they wore revealing clothes like mesh brassieres, and garter belts worn with pum-pum short) as they moved only their wide hips; the _sheesh-sheesh_ of beads around their waists and gold jewelry dancing along with them. I watched, in awe of their beauty. Their hair gelled into coifs; their makeup flawless — face powder four shades lighter to give the illusion of fairness; plump lips fixed into pouts; eyebrows arched to give that perpetual surprised look that Jamaican women rarely have (even if they were in fact surprised); nose piercings and strategically placed moles. I thought about my mother. Compared to these women, she was far too conservative and bland with her church hats — hats that added cubits to her status as First Lady of the church, though veiling her strength. These women seemed to mock her in their daring outfits. Defiant in their poise, they seemed to use their costumes not to attract but to be seen. When a man looked at them, he did not see easy conquests, but the challenge to prove himself behind their backside as they moved to the BOOM-BOOM of the dancehall rhythm, their respect a proof of his manhood.

Josie and I stood by ourselves by the goalposts, watching. We mimicked the women’s moves, dressed in our wigs, makeup, and the skimpy outfits we found at the Salvation Army, our limbs bare and covered with mosquito bites from the gully. The warm blast of the music rolled over us. Josie gently bumped her hips to mine to get me to move closer. But I stood, my feet firmly planted like roots, my knees shaking.

> The warm blast of the music rolled over us.

“What if they find us out?” I whispered.

She didn’t seem afraid. The glitter in her eyes sparkled brighter than the sequins on the women’s outfits; it gleamed with something more than just excitement.

“Dey won’t be able to tell,” she said, linking her arm with mine. It was as if she were absolutely certain of this. That was how Josie saw the world — as conquerable. Rarely did she ever complain about anything, often ending statements with a resolve: “Everyt’ing g’wan be fine. You’ll see.”

Josie smoothed her long red wig, which she liked to comb — sometimes for hours in the gully while singing lullabies to it as if the thing were a living pet. The bangs came down in her face, which she liked to blow to feel the lift and fall of the feathery, Farrah Fawcett strands. Before I could stop her, she had moved into the warm glow of the streetlight, where people danced.

“Come!” she said, calling me over with her fingers.

I shook my head and folded my arms across my chest, feeling naked and exposed. I wanted to haul Josie off the dance floor and back to our hiding place in the gully. I wanted to drag her back to the cardboard box we slept on, where we usually spooned each other, our backs to the world. Vybz Kartel’s lyrics blasted from the speakers. Instead I watched Josie dance. She became a sensation right away — the way she maneuvered her seemingly pliable body with enough quiver in her rump to make men stand up. She danced on her head-top, legs in the air. She shook, froze, then shook again, before landing in a perfect split. She danced as though she had been born to do just that; as though she were a dancehall queen and not a gully queen. She caught my eyes and smiled, tilting her head back, imbibed by the high she got from the attention. And I felt myself becoming a part of her show, her captive audience.

The deejay hollered into the mic, his eyes on Josie, “Watch har! Dat is a real dancehall queen!”

The crowd pushed toward her and formed a circle to watch Josie flip on her head and land in a romp-shaking split. “Guh deh gyal!” They hooted and applauded.

That was when I saw him. The man on the chair next to the deejay, smoking a cigar. He presided over the dance like my father in the pulpit on any given Sunday, dark as a shadow. A plume of smoke veiled his face, and all I could see was a flash of gold teeth. Two men leaned to whisper something to him. He stood so abruptly that his chair fell over. His shades reflected the blaze of amber lights around Josie.

“Josie!” I shouted from the sidelines, my heartbeat quickening, making its way up to the base of my throat. In that moment, I could not communicate the danger, or convey it with speed. “Josie!” I managed to scream again. But Josie had already disappeared into the music. She had told me once, too, that it’s the only way.

_Nicole Dennis-Benn is the author of the critically acclaimed novel_ (1)_._