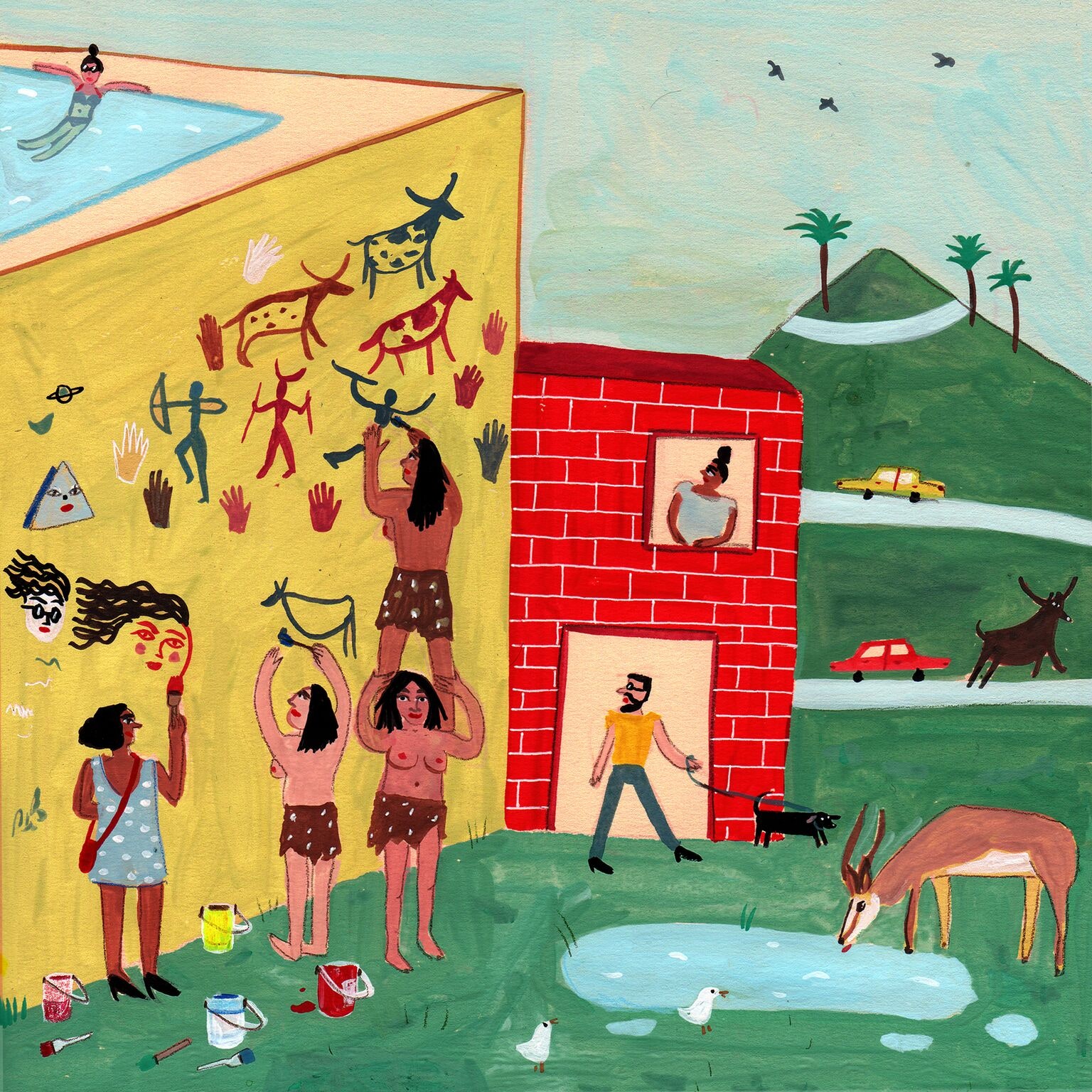 When I was 9 years old, my dad and I started writing a musical together. He was a linguist with a taste for opera, and I was deep into disco. We found our point of overlap in _Cats,_ the first in a wave of mega-musicals that swept through the ’80s. My dad suggested our musical should tell the story of Emily Carr, one of the early modernist painters in Canada. I was sold when he showed me a photograph of Carr living in a caravan with a pet monkey named Woo. Her life would become a series of songs. Every number would star me.

The egocentric approach suited my young mind, and the first song we wrote was a showstopper with a throaty chorus. My dad indulged my theatrics by accompanying me on the piano, like a church organist set on fire. I sang the solo tonsils-out and danced with the vigor of a girl in love with Donna Summer.

But we never got further than the first song. My dad had cancer. He died the next year.

I imagine he knew he was dying when we started writing the musical. I don’t know if his choice of subject had any significance. Maybe writing a musical about Emily Carr was just his way of spending time with me, a kind of parting gift. And for the life of me, I can’t remember how it was supposed to end.

About six years ago, I became fascinated with Neanderthals. In school I was taught that they were primitive, uncivilized, and brutish — an evolutionary stopgap between modern humans and apes. They were extinct because they didn’t evolve, or we killed them off, or we outsmarted them with our large brains. In 2010 many scientists started to rethink Neanderthals based on evidence found in modern human DNA. People of European and Asian descent have inherited between 1 and 4 percent of their genome from Neanderthals.

Modern humans and Neanderthals lived in the same areas for thousands of years, and, it’s becoming clear, they were physically more like us than we had allowed ourselves to imagine. Their brains might have been slightly larger than ours. They had a hyoid bone, which anchors the tongue and possibly allowed for speech. They also had the FOXP2 gene, and it plays an important role in our ability to talk. If I asked a Neanderthal a question, could she answer? If we could find words in common, how else could our relationship develop? Somehow, it did. The presence of their DNA in us confirms that we had sex and reproduced with them. The more I read about this new view of Neanderthals, the more I struggled to understand why our similarities to them weren’t always obvious. In modern clothes, after a shower and a moment with a razor, a Neanderthal might look like what they are — our closest cousins. Why couldn’t we see it?

A beautiful and sprawling piece in _The New York Times Magazine_, ” (1),” recently explained how our similarities to Neanderthals go beyond genes. We shared behavior that was previously believed to be exclusively human, like burying our dead, making jewelry, and using toothpicks. The article summarized much of the research I’d done for a novel I was writing. It was affirming to see that the _Times_ agreed with so many of my opinions. But when I finished reading, something niggled. I wasn’t sure what, so I started again and found a question in the fourth paragraph: “Who was Neanderthal Man?”

There are many things that we will never know about Neanderthals, but there is one thing we do know: around half were women.

While researching Neanderthals, I developed a professional crush on many women who earned their Ph.D.s in the ’70s, but specifically (2), who is now a professor of ecology and evolutionary biology at Princeton. She started university as one of three women in a class of undergraduate math majors. The men in her class were assigned academic advisers, but the women weren’t because it was assumed to be a waste of faculty time — women wouldn’t continue to study seriously. Nevertheless, Altmann persisted. She later switched to biology and started to study baboons.

> There are many things that we will never know about Neanderthals, but there is one thing we do know: around half were women.

The field of biology was, and still is, heavily influenced by the Darwinian idea that females have a fairly passive role in sexual selection. Altmann found this view inherent in the scientific methods used in fieldwork. For example, when a male baboon made a show of asserting his need for sex, food, or whatever else, the researcher would notice the fuss and start taking notes. With her background in math, Altmann pioneered a statistically representative method for choosing an animal to watch for a set amount of time. It meant she paid more attention to the less dominant males, females, and immature baboons. She found they had active, complex, and nuanced ways of meeting their needs. One finding was that females form long-term bonds with each other, and those with stronger friendships tend to have more success in raising offspring. We know this because Altmann’s observation methods ensured those baboons were considered important enough to see.

When I looked for similar research about female Neanderthals, I found almost nothing. This can partly be explained by how we have historically overlooked Neanderthals as a group in both science and popular culture. We’ve used their existence as a foil for defining human specialness, rather than attempting to gain much insight about them. H.G. Wells wrote about Neanderthals in 1921, and his description expresses the sentiment of his day: “A repulsive strangeness in his appearance … his beetle brows, his ape neck, and his inferior stature.” Things have changed. Our old ideas about Neanderthals are being upturned. For instance: A recent analysis of dental plaque by researchers at the University of Liverpool found that, rather than the Paleo-diet carnivores we’ve imagined them to be, Neanderthals may have had a predominantly vegetarian diet. It’s a good example of the more open minded modern approach, but — with a few exceptions — the focus has yet to extend to women

For insight into Neanderthal women, I looked for studies about their close cousins, female modern humans who lived during the same period. I found more research, but archaeology, like biology, has historically seen men as the main players. Some of the oldest cave paintings ever found, for example, were made by artists who stenciled their handprints onto cave walls. For years it was assumed that these artists were men, possibly because some of the prints were found near depictions of hunting scenes. Archaeologist Dean Snow did a study to measure the finger length of the handprints — some argue that the ratio of the ring and index fingers of women tend to be closer in length. In eight cave sites in France and Spain, he judged that three-quarters of handprints belonged to women. It’s only one study and, like many important studies, is open to question. However, if I allow myself to think that women who lived during the Paleolithic might have made art, it loosens my imagination. I can see more.

Math and measurements can be useful, and science should be a system that corrects for our inclinations, but we all star in our own show. It’s impossible to have a truly impartial point of view because we form beliefs by gathering information about what we notice — seeing is believing. While that statement feels intuitively correct, a more accurate way of understanding how we form ideas might be to flip the statement — believing is seeing. In order to make sense of a confusing world, we select what to see based on what we believe. I ran headlong into this problem when I first started trying to write a plausible story about what happened when modern humans and Neanderthals made contact. I still held the old stereotypes about Neanderthals I’d learned in school. Everything I read was filtered through that lens. It took many drafts to reset my brain.

When I tried to imagine what a Neanderthal might be like, I used the revised scientific research as a guide, like a set of creative constraints. Then I imagined a girl with a life as varied, complex, and confusing as any other, and I took time to observe her. She has a shock of red hair. She is always hungry and craves meat. She takes pride in her thick ankles and loves the smell of fresh pine boughs when she brings them inside to freshen up the hut. She dotes on her brother, who was born with a crooked arm, and worries about what will happen if their mother dies. She chants about bison, but if she had been born 40,000 years later, she might have been the type to belt out show tunes in a raspy, high-pitched voice.

We all star in our own show, but it’s a lonely way to live. I’ve found the richness in life lies in trying to see beyond the tip of my own nose. I write fiction so that I can imagine how it might feel to live another life. Maybe I’ll start a novel about Emily Carr and her monkey, Woo. I’ll probably never remember how the musical I was writing with my dad was supposed to end. It might be that we didn’t even have a good ending — maybe it just fizzled out.

But I can also imagine it another way. Maybe my dad knew he was dying. And he wanted to make sure I knew I could play a central role in a story, even if I turned out to be less fabulous than Donna Summer. It’s not the ending that mattered, but what I choose to see from the start.

_Claire Cameron’s novel_ The Last Neanderthal _will be published in April 2017 by Little, Brown and Company and is available for preorder._