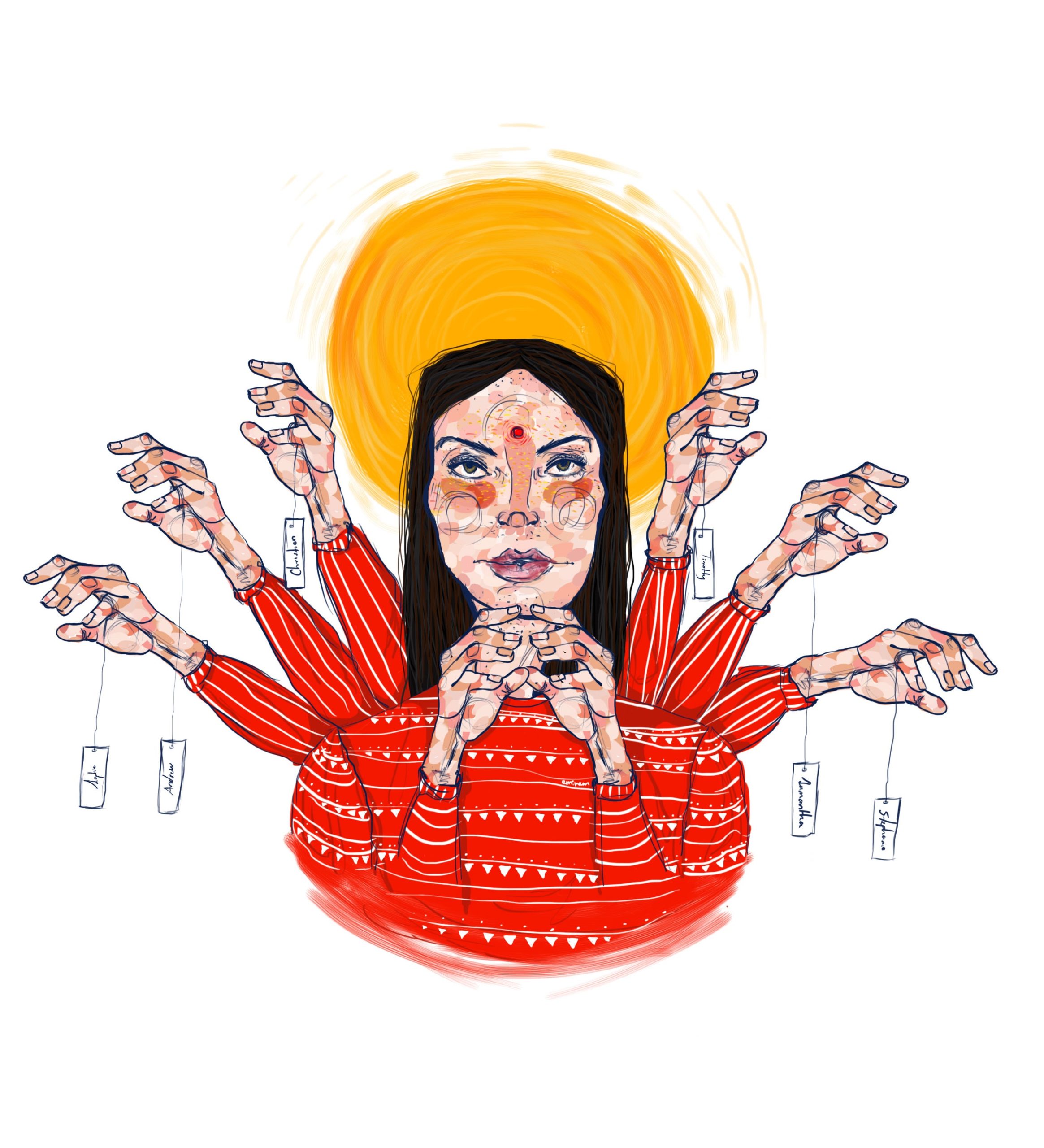 Hi, my name is Whitney, and I’m really nice.

It’s only recently that I’ve learned to coach myself through this self-abuse: “Whit, you’ll survive even if some random stranger thinks this sucks.” That coaching of my inner monologue is a daily course correction I do because I have a “disease” called codependence. DOWN BOYS! When my therapist first suggested that I was codependent, I was confounded because I wasn’t dating anyone. I thought it meant you were in a bad relationship with someone else, when it really means you’re in a bad relationship with yourself. That’s how misused the term is, much like “genius,” “hilarious,” and “starving.” A simple definition is that codependents can’t tolerate the discomfort of others.

In a 12-step meeting for codependence, I once heard a man say, “In this program, we are pathologically thoughtful and obsess over other people’s problems to avoid our own.” I got a pit in my stomach because I felt like he had been reading my journal. How did he know that I was obsessed with solving other people’s problems while my own life was a scalding-hot mess? I couldn’t stop buying people overpriced candles, yet I had not paid my rent. Did he know I was giving people numbers of doctors and therapists I myself wasn’t going to? And helping people through breakups while I couldn’t make time for myself to floss?change my behavior and dysmorphic perceptions. I had to roll up my sleeves and rewire my brain.

In romantic relationships, I was drawn to real fixer-uppers. I mean, if you’ve Googled me, you probably know what I’m talking about. I’ve dated people who are literally illiterate. Another one of my trusty mental-health professionals says that if I walk into a room of people, the broken people in attendance will “glow” to me. I could enter a party and within five minutes be in an all-consuming conversation with a thrice-divorced narcissist managing various addictions. My dream guy has always been Eminem. I just feel like I can change him, you know?

I couldn’t say no to save my life. I even found myself in sexual situations I had no interest in. I’ve slept with people because “they drove all this way.” My vocabulary was littered with obligatory phrases like “I have to” and “I’ll just swing by for an hour.” I routinely sabotaged relationships with my seeming altruism. Let’s just say I’ve purchased more than one custom gift with a boyfriend’s favorite NFL team’s logo on it from Etsy. After a breakup, my take was always “I loved him too much.”

But it was very hard to convince me that I wasn’t just, like, an amazing person. I buy so many Diptyque candles for people! How can I possibly have a problem? In recovery, I learned that the difference between codependence and being nice is motives. Essentially, if I drive you to the airport because you can’t afford a taxi and I expect nothing in return, that’s benevolent. But if I drive you to the airport secretly hoping you’ll like me, owe me, won’t abandon me down the line, or to control your perception of me (i.e., I want you to think I’m nice), that’s codependent.

I had always had a hunch something was wrong because I could give but I couldn’t receive. I could give someone nice jewelry, but when they tried to buy me a two-dollar coffee I would resist to the point of it getting awkward. And if someone gave me a gift, I viewed it like a grenade. I would have to wait until you left to open it because I was so worried I wouldn’t receive it well enough. My dear friend Beth gave me necklaces with my dogs’ initials on them, and I stressed out that she didn’t know how much I love them. I’ll Instagram them looking resplendent under the Nashville filter and tag her, send her photos of me wearing them so she didn’t think I was lying, and yet I still felt a pang of guilt that I didn’t deserve such kindness.

> I had always had a hunch something was wrong because I could give but I couldn’t receive. I could give someone nice jewelry, but when they tried to buy me a two-dollar coffee I would resist to the point of it getting awkward.

Eventually I hit my codependent bottom when some family members got sick and I martyred myself to the point of getting pneumonia and NOT NOTICING I HAD IT because I was too preoccupied with other people’s problems. I started going to (1) meetings. I had heard about Al-Anon because I have a lot of addiction in my family and had gone a couple of times to try to manipulate other people into going. My therapist finally gave me an ultimatum that I had to go because talking about my problems simply wasn’t enough for me to change my behavior and dysmorphic perceptions. I had to roll up my sleeves and rewire my brain.

When I started going to meetings, every time I heard someone share, I related so much it felt like they had hacked my e-mails, or at least my Amazon account. I learned that as a codependent, I give too much so the scorecard is uneven in order to subconsciously re-create my childhood circumstances of feeling victimized and invisible. I.e., if you’re not going to make me feel bad, I’m going to be so nice to you that in comparison, you seem like you’re an asshole. GOTCHA!

My role growing up was the peacekeeper. My home was stressful, and putting out fires was the only way I could feel seen and like I had a modicum of control amid the emotional pandemonium. When my parents fought, I would put on improvised performances or fashion shows in our living room to try to distract them. Fussing over narcissistic people was how I kept in their good graces and how I felt safe. Worrying about other people’s problems (or perceived problems) was a habit I developed very early on. It worked as a child, but once I grew up, this coping device was a weapon I kept using even though I was no longer at war.

After being in recovery for codependence, I still get to be nice, but my motives have had to change. Today, my struggle is to do only 50 percent in my relationships. That may sound weird to some people, but my default is to do about 90. I once heard a woman struggling with codependence share her goals for the holidays: “This year, I am going to do half of everything I think I should do: half the cooking, half the gift-buying, half the party-going.” That sounds pretty simple, but for someone whose self-worth is contingent on others’ approval, it’s climbing Mount Everest.

Recovery is not without its cataclysmic life changes. I lost some friends who preferred me when I was a doormat. As my friend Kevin says, “When you get healthy, the sick get angry.” I still panic that mitigating my codependent impulses will make me less successful professionally, since needing people’s approval is historically what propelled me to work so hard. If I actually had self-esteem, would I ever work as hard again? The answer is no, but that’s OK.

> Recovery is not without its cataclysmic life changes. I lost some friends who preferred me when I was a doormat. As my friend Kevin says, “When you get healthy, the sick get angry.

Over the past five years, I’ve worked my ass off to re-parent myself and change the neural pathways that were crystallized as a child. I’m proud to say that today, when someone gives me a gift, I can receive it with grace. I can say no and not be wrought with guilt. I routinely employ phrases like “I’m overcommitted this week” or “I’m at capacity, but check back with me in a couple of months.” When I say no, I don’t over-explain or apologize profusely. I understand on a soul level that I can’t give what I don’t have.

Right now, the only person’s approval I need is that of Lenny’s editor, which means I have to end this. In closing, the bad news about all this is that if we ever meet, I won’t sleep with you out of guilt. But the good news is you can buy me a cup of coffee.

*Whitney Cummings is a comedian. Her HBO special* I’m Your Girlfriend *airs January 23.*