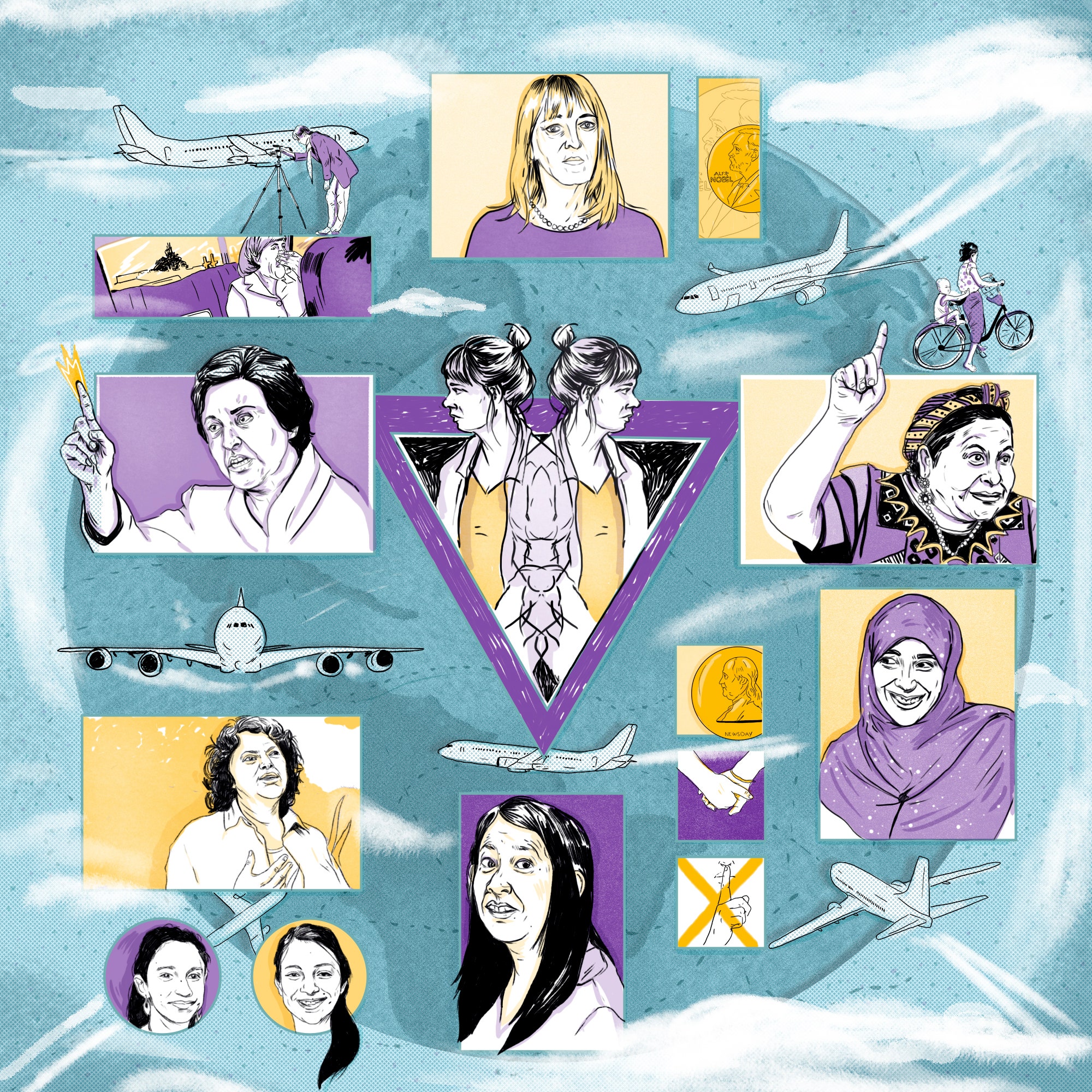 Shirin Ebadi — a commanding figure with muscular, decisive movements — first became interested in human rights during the 1979 Iranian revolution. Now 70, the (11) was a judge at the time and also raising two young daughters. “I loved my profession, but in short time not only did I lose my job for being a woman,” she explained when we were traveling together in October 2017, “I also saw how many discriminatory laws against women were passed.” She wanted to be able to answer her children if they asked, “Mother, considering your profession and your knowledge of the law, what have you done for women’s rights?” And that is how she became a human-rights activist.

This February, I reflected on Ebadi’s life from Yangon, Myanmar, where I was working on (12). A few weeks earlier, (6) had been charged with breaking the Official Secrets Act, a little-used colonial law, and were facing 14 years in prison. When I was planning my trip there, almost everyone I spoke to told me not to go because, for example, (17) had recently been forced to leave the country due to death threats. (During that trip, I traveled out of the country to interview Htusan, and she reiterated that the real danger in Myanmar was directed at local journalists, especially those who worked for international media outlets — not international journalists, like me.)

Over the course of her life, Ebadi, like many women, has been told a litany of places she should not go and things she should not do as a woman. I had an ongoing conversation with Ebadi over the two weeks in October when we both traveled with the (4) in Guatemala and Honduras to visit and learn from indigenous women human-rights activists. When I asked Ebadi about how she responded to receiving death threats for her work, she said, “Life is more beautiful lived dangerously.” These are words I will never forget.

As a journalist traveling with Ebadi and Nobel laureates Rigoberta Menchú, Jody Williams, and Tawakkol Karman, I witnessed the work of powerful, outspoken women, women who had persisted and thrived despite often working on issues or in areas where they were encouraged to stay silent and stay at home. Ever since I was a child, I have wanted to go where people told me not to go — both because I am interested in telling difficult stories and because I want to prove people wrong. I want to show them that I am equal and prepared for any task, that being a girl or a woman is no impediment. That, in fact, it could be an asset, especially when reporting on women’s rights.

Even though I have reported everywhere from Culiacán, Mexico, to San Pedro Sula, Honduras, and have completed both (18) and (7) safety trainings for journalists, editors still sometimes ask me, even as recently as last week, if I am willing to go to a place because it is “too dangerous.” I doubt they would ask male journalists the same question. In response to such questions, I usually list my hostile-environment-training certifications and discuss my work in Juárez, Mexico, which I undertook when it was the most violent city in the world. I want people to understand that I am not crazily rushing to dangerous places — I am prepared, there are stories that must be told, and I want to be treated as an equal to my male colleagues who dominate war reporting and most other assignments in places with high levels of violence.

Despite others’ judgments, I have spent my entire career going places where people tell me not to go, places that are labeled “too dangerous” or “too risky” for women. Last year, (8) while trapped in an airplane on the airport’s tarmac. That year, I also began an 18-month project on migration with (5) that would take me (9) border through Guatemala, Honduras, and El Salvador. And when I reported on (13), (14) was newly minted as the most dangerous city in the world.

In these dangerous places, women’s stories are often forgotten. The only news that is reported is by and about men and often focuses on gangs and cartels. Rather than feeling afraid, I prepare. I hire a local female journalist as a fixer, use my skills as a translator, find a female or nonbinary photographer from (2), and put together a team that will tell an important story.

What I have learned from reporting in these areas is that with planning, safety training, contacts, and language skills, I can go anywhere. In the past year, I have reported on (5) who have been mutilated or disappeared on the migrant trail; I have (3), and I have written about (15). The world needs to see news reported and photographed by and about women, because risky and dangerous places, unfortunately for women, are everywhere. Sometimes, as was the case of (1), the most mundane and safe-seeming places prove to be the most dangerous.

Back with Ebadi last October, we visited Laura Zúñiga Cáceres, 25, one of the three daughters of (16) (10), who fought to protect indigenous Lenca lands from hydroelectric projects. “My mom’s leadership helped us imagine what powerful women leaders look like,” she told me. While visiting these indigenous lands, I spoke to young Lenca girls in the community. “I want to be brave like Berta,” said one young girl in a blue-jean skirt and a purple top. “I want to be strong like her,” shouted another, who ran by. “I want to protect my land,” yelled another, laughing. Zúñiga Cáceres, who is also an environmental activist, added, “My mom taught us what she tried to teach the whole world — what it looks like to commit your conscience to fighting for an ethical way of life.” Just like the fearless young girls who had been inspired by Cáceres, I feel that it is best to move through life motivated by love, not fear, because what is dangerous for women is not a particular place — it is silence.

*Alice Driver is a freelance journalist based in Mexico City who covers migration, human rights, and gender equality.*