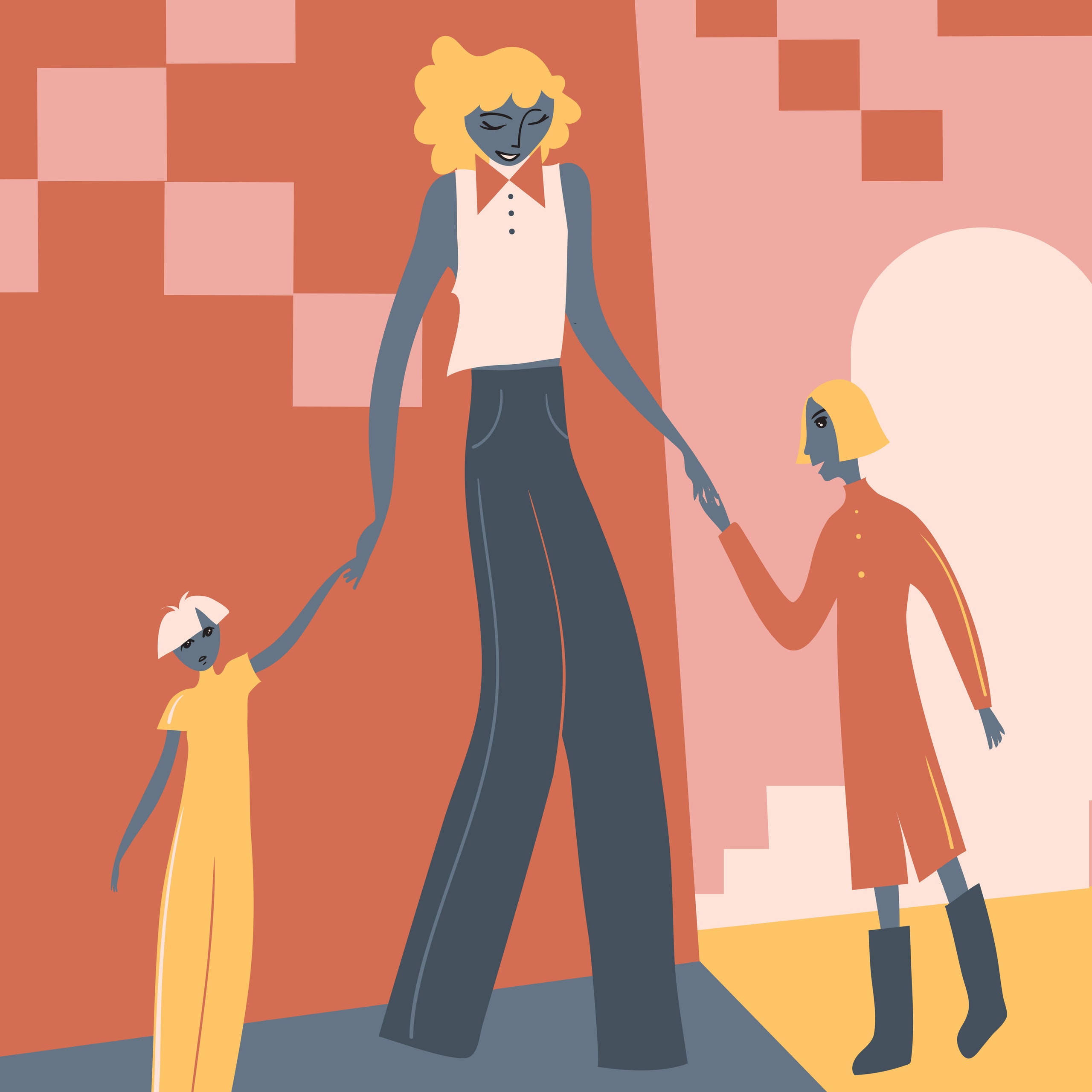 It’s Saturday afternoon in Brooklyn, and I am sitting by my living-room window attempting to sunbathe. I’m Skyping my older sister — she’s sitting in her moonlit apartment in Tel Aviv — and telling me about her potential wedding and desires to start a nuclear family of her own. Suddenly, she says, “I want two kids — a boy and a girl.”

This takes me by surprise and I go quiet. Her comment lingers in our separate rooms, and I am reminded of the counselor I once had in an American-Jewish summer camp who said, “Every time there is an awkward silence somewhere in the world, a queer baby is born.” If he was right, I wonder if that baby will come out of my sister. I hope that will finally get us out of the paradigm in which assuming, projecting, and determining what your child’s gender is before they are even born is a harmless, neutral, or natural act.

After all, my sister was an invaluable witness to what it was like for me to be brought up as a boy — experiencing deep dysphoria and estrangement from my body; overcoming an intense amount of trauma from the toxic masculinity and Zionism of our surroundings; holding on to secrets and lies; mistakenly coming out as a gay boy; and eventually moving to New York, where I built and then had to take apart a huge part of my life in order to articulate my transfemininity on my own terms.

My sister knows that the decision our family, medical system, and society made about my body before I ever had a say about it was no small challenge to overcome. And yet after witnessing that experience, and experiencing the intense expectations she herself had to face as a cis girl, there is still this societal fantasy: “I want a boy and a girl.”

As someone who held a day job in childcare while beginning my transition (and attempting to have a sustainable career in the arts), I’ve constantly come up against these kinds of ideas about gender and children. As I transitioned, I started to feel as if there were no space for me in the rigid binary world that was built for some of the children I cared for. I began moving away from my desire to be around children — which I don’t think is healthy for me or for them. There is a lot to learn from children’s agile and imaginative ways of exploring themselves; there is also a lot to learn from trans adults who continue to explore and articulate their identities despite living in a world that punishes them for it. Getting along with kids is easy; getting along with the gendered world adults are constructing for them is heartbreaking.

Growing up, I was always known as my community’s child whisperer, the one who would end up rolling around and laughing with the babies and small children who came over for Friday dinners. I enjoyed the break from adult seriousness and the admiration I got for how good I was with the kids; especially as someone who was thought of as a boy, I took on that job with great pride. I was so good with the little ones that multiple babies learned my name as one of their first words. My birth name, Itamar, was too long, so they would just call me Ita, the name I would later officially take on as my own.

That is why, when I moved to the United States and needed a job after acting school, childcare seemed like the natural route. And like the family I grew up in, the families I worked for in New York were thrilled to share with their liberal friends how lovely their “Israeli manny” was.

But as I began questioning and articulating my gender, something shifted for me: I began to notice the gendered microaggressions some of these parents had toward their kids. Like the one time a mother of a six-month-old frantically ran back inside after leaving for the day to put a pink ribbon in the baby’s hair. “People keep thinking she’s a boy and it’s driving me crazy,” the mom told me, the ribbon repeatedly slipping from the kid’s not-yet-grown mane.

I noticed that older kids took on these microaggressions as facts. Like the time I picked up eight-year-old N from school. I had just gotten both my ears pierced and we had the following conversation:

N: “Why do you wear two earrings?”

Me: “Why does your mother say that?”

Me: “And then what would happen?”

These small, amusing innuendos were only the tip of a much more violent iceberg. A few weeks later, I went to N’s public school wearing a skirt and presenting as gender nonconforming for the first time. I walked in the hallway and found N’s class, which was divided into two lines: on the left side, all the “boys,” who wore pants and button-down shirts; and on the right, all “girls,” who wore skirts and vests. I stood right in the middle.

“N, your babysitter is here,” the teacher proclaimed when she saw me. But N stood frozen and scared and asked me with a whisper, “Could you please, please, please go wait for me outside.” On the walk home, I understood — N was starting to get teased for having a babysitter like me and was worried about getting bullied for my presentation.

My appearance also distressed the father of a family who needed a last-minute babysitter. After presenting my résumé and experience and having what I thought was a pretty standard job interview, the father accidentally sent me the following text when I was on my way home:

“‘Ita’ is a very eccentric gay man with hoop earrings and a scruffy face.”

To which I responded:

“I am actually a pretty laid-back trans woman, and I hope that if your kid grows up to be one too you will treat them with more respect. Good luck finding a babysitter tomorrow.”

And while I do hope this father treats his kid with respect regardless of their gender, I am also concerned about how he will teach his child to treat trans people. Because as many of us know, kids start repeating the behavior they find legitimized by adults, which can have very intense consequences. Kids cooing, pointing, and name-calling trans folks in the street has effects on our mental health, and kids pointing and misgendering us loudly in public spaces can bring attention to some of us who need to blend in in order to stay alive.

That is the slippery slope of determining a baby’s gender without giving them a way out: under that paradigm, those of us who found a way out will just keep being treated as a threat.

But, luckily, many of us are creating different ways of relating to and educating one another. Trans and gender-nonconforming folks are leading the way, but cis people who understand that these colonial gender structures don’t really fit *anyone* have also joined the ranks.

Since talking about my experiences with childcare more publicly online, I have found work with trans gay parents and cis straight parents who are letting their theybies understand and articulate their gender on their own terms. I have also found comfort hearing from trans and nonbinary educators who are tirelessly working to ensure that the next generation of kids knows that our community has always existed and will continue to do so. Now, as an artist in residence at Brooklyn Arts Exchange, I get a glimpse into an arts and education institution that is figuring out how to create spaces in which self-exploration and articulation around gender lead to play and not to trauma.

While my hopes for my life as an artist don’t involve working in childcare for much longer, and I don’t think having children is in the cards for me, it is healing to know and imagine a world in which kids of all genders don’t have to hide or feel shame on their way to understanding the power and wonder of who they are. We need trans and nonbinary educators and parents who allow their children to articulate their gender on their own terms in order for that world to become a reality.

*Ita Segev lives in Brooklyn. She makes live performance, writes, performs, acts, and does advocacy and community-building work, mainly around the intersection of her transfemininity and Palestinian solidarity as an anti-Zionist Israeli. Follow her on Instagram (1).*